KECK OBSERVATORY’S PREMIER PLANET-HUNTING MACHINE IS GETTING EVEN BETTER 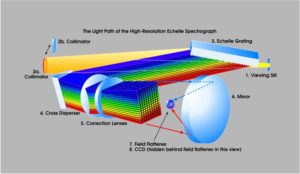 SEATTLE, Washington (January 6th, 2003) The world’s best planet-hunting machine, the Keck High Resolution Echelle Spectrometer, will be getting even better this year with an advanced imaging array that will improve efforts to detect extra-solar planets, examine distant quasars, measure extragalactic stars and do other research requiring very precise wavelength measurements of thousands of color channels with one exposure.

HIRES, a visible-wavelength spectrometer responsible for 20 percent of the science on the Keck I telescope, will be getting an advanced new detector that will increase photon detection rates at ultraviolet wavelengths by a factor of 8 (at 3200 Å), expand single-exposure wavelength coverage, provide finer sampling of spectral features, and allow faster readout rates to provide higher-quality science in less time.

From day-one, HIRES has been an outstanding instrument. When it was first commissioned ten years ago there was no other instrument like it,” said Frederic Chaffee, director of the W.M. Keck Observatory. “This upgrade will bring HIRES into the 21st century and keep this instrument competitive with its peers in producing some of the world’s best optical spectra for leading-edge science.

The new CCD system will be a mosaic of three 2048 x 4096 CCD chips with 15-micron pixels arranged in a stacked configuration for an image dimension of 6144 x 4096 pixels, about 130 percent larger in area than the current CCD. The detector will replace the current chip, which is a single 2048 x 2048 device that has larger 24-micron pixels. When choosing a spectrograph for their science, astronomers sometimes have to sacrifice wavelength coverage for spectral resolution. By more than doubling the detector size without reducing the resolution they will be able to have their cake and eat it too.

What we’re looking at when we’re searching for a planet are wavelength shifts of one-thousandth of a single pixel, less than a hundred atoms on the silicon crystal lattice of the CCD,” said Dr. Steve Vogt, principal investigator for HIRES and professor of astronomy and astrophysics at UCO/Lick Observatory, University of California at Santa Cruz. “Detecting these subtle changes – tiny fractions of a single pixel – over time scales of many years, is the art of planet finding.

HIRES made history early in its commissioning when it was able to examine objects 10 to 100 times fainter than any other similar instrument in the world. Its spectral capabilities enabled measurements of deuterium atoms that provided direct evidence for a refined model of the Big Bang theory, and it was a critical instrument in establishing a new class of stars known as L & T dwarf stars. Most well known is HIRES’ unique role in the discovery and confirmation of nearly 50 extrasolar planets, including the only known solar system other than ours to contain a Jupiter-like planet in a Jupiter-like orbit.

“The combination of Keck and HIRES have accounted for nearly half of the published extrasolar planets,” said Dr. Paul Butler, staff scientist at the Department of Terrestrial Magnetism, Carnegie Institution of Washington. “From glass and steel Steve Vogt has designed and built an instrument capable of peering into the heart of distant stars and detecting their unseen planets. With the new CCD upgrade, the full genius of Steve Vogt’s vision will finally be unlocked.”

Quantum efficiency rates for the ultraviolet region (the ratio of number of photons detected to number of photons present) are expected to rise from 8 percent to 65 percent (at 3200 Å). This improvement in the ultraviolet region will open a new window to astronomers interested in very distant, very old extragalactic objects such as quasars and studies relating to the structure and characteristics of the early universe.

“This upgrade will be a dramatic improvement,” said Dr. David Tytler, professor of physics at the Center for Astrophysics and Space Sciences, University of California, San Diego. “The much faster response rates will allow us to do studies that otherwise would have been too difficult by giving us much better data on objects that are at the limit of what can be done today, and by allowing us to examine many objects that are fainter than those we can now observe. We are going to see major improvements in the accuracy of our results, and some completely new research programs.”

In addition to having smaller pixels (which allows finer sampling of spectral features), the new HIRES CCDs will have very low readout noise and very high charge transfer efficiency (CTE). Readout-noise measures the certainty with which a signal has been detected, and CTE is a measure of how many electrons are “lost” as a pixel’s charge is digitized and transferred across the CCD for readout. The new assembly is designed for a readout noise of less than 3 electrons, compared to current noise of about five or six electrons. HIRES will have a CTE level of at least 0.999997, which means that typically less than 1% of the electrons will be “lost in the shuffle” across the 4096 pixels of the CCD during the readout process. New electronics and parallel processing will provide exposure readouts in less than 30 seconds, rather than the several minutes it currently takes for each readout.

The HIRES upgrade will also eliminate a deficiency in the current CCD caused by a slight curvature on the surface of the old chip. This curvature required compromises to be made in the optical light path. Much like the improvements made to the Hubble Space Telescope, the new CCD and optical prescription will bring HIRES back to its original specifications of 12 micron FWHM resolution images. Currently, HIRES images have a limiting resolution of about 20 microns. “This detector upgrade will finally enable HIRES to deliver the full power of its original optical design,” said Vogt.

HIRES was designed and built by Steve Vogt and the Instrument Development team at UCO/Lick Observatory, University of California at Santa Cruz. Commissioned in 1993, the instrument is 18?feet square and weighs eight tons, and is permanently mounted to the Nasmyth deck of the Keck I telescope at the W.M. Keck Observatory in Hawaii.