METHANE CLOUDS DISCOVERED AT THE SOUTH POLE OF TITAN 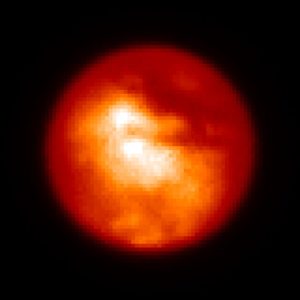 m. brown, a.h. bouchez, c.a. griffith of caltech and w.m. keck observatory
An image of Titan taken with the W.M. Keck II telescope on December 3, 2001. Complex bright and dark features around Titan's "continent" can be seen at their highest resolution ever. Several small bright clouds can also be made out near Titan's south pole.

MAUNA KEA, Hawaii (December 18th, 2002) Teams of astronomers at the California Institute of Technology and the University of California at Berkeley have discovered methane clouds near the south pole of Titan.

Titan is Saturn’s largest moon, larger than the planet Mercury, and is the only moon in our solar system with a thick atmosphere. Like Earth’s atmosphere, the atmosphere on Titan is mostly nitrogen. Unlike Earth, Titan is inhospitable to life due to the lack of atmospheric oxygen and its extremely cold surface temperatures (-183 C; -297 F). Along with nitrogen, Titan’s atmosphere contains a significant amount of methane.

Earlier spectroscopic observations had hinted at the existence of clouds on Titan, but gave no clue as to their location. These early data were hotly debated, since Voyager spacecraft measurements of Titan appeared to show a calm and cloud-free atmosphere. Furthermore, previous images of Titan had failed to reveal clouds, finding only unchanging surface markings and very gradual seasonal changes in the haziness of the atmosphere.

The new observations were made using the W.M. Keck II 10-meter and Gemini North 8-meter telescopes in December 2001 and February 2002. The results are being published in the December 19 issue of Nature and the December 20 issue of the Astrophysical Journal.

Improvements in the resolution and sensitivity achievable with ground-based telescopes led to the present discovery. The observations used adaptive optics, in which a flexible mirror rapidly compensates for the distortions caused by turbulence in Earth’s atmosphere. These distortions are what causes the well known twinkling of the stars. Using adaptive optics, details as small as 300 km (186 miles) across can be distinguished at the enormous distance of Titan (1.3 billion km / 807.8 million miles), equivalent to reading an automobile license plate from 100 km (62 miles) away.

The images presented by the two teams clearly show bright clouds near Titan’s south pole. “We see the intensity of the clouds varying over as little as a few hours,” said Dr. Henry Roe, lead author for the Berkeley group. “The clouds are constantly changing, although some persist for as long as a few days.”

Titan experiences seasons much like the Earth, though its year is 30 times longer due to Saturn’s distant orbit from the sun. Titan is currently in the midst of southern summer, and the south pole has been in continuous sunlight for over six Earth years. The researchers believe that this fact may explain the location of these large clouds.

“These clouds appear to be similar to summer thunderstorms on Earth, but formed of methane rather than water. This is the first time we have found such a close analogy to the Earth’s atmospheric water cycle in the solar system,” said Antonin Bouchez, a Caltech researcher.

In addition to the clouds above Titan’s south pole, the Keck images, like previous data, reveal the bright continent-sized feature that may be a large icy highland on Titan’s surface, surrounded by linked dark regions which are possibly ethane seas or tar-covered lowlands.

“These are the most spectacular images of Titan’s surface which we’ve seen to date,” said Dr. Michael Brown, lead author of the Caltech paper. “They are so detailed that we can almost begin to speculate about Titan’s geology, if only we knew for certain what the bright and dark regions represented.”

In 2004 Titan will be visited by NASA’s Cassini spacecraft, which will look for clouds on Titan during its multi-year mission around Saturn.

“Changes in the spatial distribution of these clouds over the next Titan season will help pin down their detailed formation process,” said Dr. Imke de Pater from UC Berkeley. The Cassini mission includes a probe named Huygens that will descend by parachute into Titan’s atmosphere and land on the surface near the edge of the bright continent.

The Gemini observatory is operated by the Association of Universities for Research in Astronomy under a cooperative agreement with the National Science Foundation. The W.M. Keck Observatory is operated by the California Association for Research in Astronomy, a scientific partnership between the California Institute of Technology, the University of California and the National Aeronautics and Space Administration. This research has been funded in part by grants from NSF and NASA.