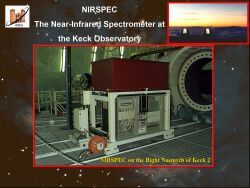 mclean, ucla and w. m. keck observatory
The Near Infrared Spectrograph, developed by I. McLean at UCLA, mounted on the right Nasmyth deck of the Keck II telescope.

McLean and his research team will publish the most systematic and comprehensive near-infrared spectral analysis of more than 50 brown dwarfs in the Oct. 10 issue of the Astrophysical Journal, the premier journal in astronomy, published by the American Astronomical Society.

Brown dwarfs are failed stars about the size of Jupiter, with a much larger mass -but not quite large enough to become stars. Like the sun and Jupiter, they are composed mainly of hydrogen gas, perhaps with swirling cloud belts. Unlike the sun, they have no internal energy source, and emit almost no visible light. Brown dwarfs are formed along with stars by the contraction of gases and dust in the interstellar medium, McLean said. The first brown dwarf was not discovered until 1995, yet McLean suspects the galaxy is teeming with them.

McLean and his colleagues do so using a sophisticated instrument that McLean designed and built at UCLA with other astronomers from UCLA and UC Berkeley. The instrument, attached to the W.M. Keck Observatory’s 10-meter Keck II Telescope atop Mauna Kea in Hawaii – the world’s largest optical and infrared telescope – is called NIRSPEC. It is six feet high, weighs one ton, and contains the most powerful infrared spectrometer in the world.

“This is the first time a large quantity of high quality spectral data are presented systematically in the infrared, where brown dwarfs emit most of their light,” said Davy Kirkpatrick, staff scientist at Caltech’s NASA-funded Infrared Processing and Analysis Center. “Approximately two percent of brown dwarfs near the sun are oddballs, and we are starting to be able to identify them and understand what makes them different. In addition, many brown dwarfs have been reported in different ways, and we now present them in a consistent manner that will become a standard reference for the future.”

McLean built the world’s first infrared camera for wide use by astronomers in 1986, and has built six increasingly sophisticated infrared cameras and spectrometers since then. (A spectrometer splits light into its component colors.)

“The quality of infrared spectra has improved drastically over the last decade,”he said.

The detectors in McLean’s spectrometers, such as NIRSPEC, have over 250 times as many picture elements as in the 1980s.

“The spectrum reveals what’s present and what’s missing,” McLean said. “What’s missing in the light tells us something in the atmosphere of the brown dwarf has absorbed the light.

“When we first studied the brown dwarf spectra, they were peculiar – like no star we had ever seen before. The reason we saw missing light in the spectra of the coolest brown dwarfs is the presence of methane in the atmosphere, which we also see in the outer gas giants of the solar system: Jupiter, Saturn, Uranus, Neptune.

“We also see evidence of water in the form of superheated steam, which we don’t see in any normal star like the sun. The sun is much too hot to have water molecules. Methane and water sculpt the infrared spectrum in a very distinctive way. The spectra of brown dwarfs show a gradual change from that of a star to that of Jupiter.

“Brown dwarfs are the missing link between gas giant planets like Jupiter and small stars like red dwarfs.”

If large numbers of brown dwarfs exist, they “could make a small, but significant contribution to dark matter,” the so-called “missing mass”in the universe, McLean said.

“Brown dwarfs won’t account for all of the so-called dark matter,” he said. “There is mass in the form of ordinary matter that is unaccounted for because we don’t yet have the technology to find it. There are brown dwarfs, and maybe small black holes, and faint white dwarfs – regular stars that lost their outer gaseous envelopes leaving the burned-out core of old stars. White dwarfs, brown dwarfs, black holes, and gas account for some of the dark matter. The rest is presumably a new form of matter.”

McLean and his colleagues – Kirkpatrick; Adam Burgasser, a UCLA postdoctoral scholar in McLean’s group and recipient of a NASA-funded Hubble fellowship; UCLA graduate student Mark McGovern and postdoctoral scholar Lisa Prato, who both work in McLean’s group; and former UCLA postdoctoral scholar Sungsoo Kim – will publish an atlas and analysis of brown dwarf infrared spectra in the Oct. 10 Astrophysical Journal. Kirkpatrick and Burgasser were responsible for most of the initial brown dwarf identifications using an infrared all-sky survey called 2MASS. McLean praised the members of his research team as “instrumental to the success”of the research.

“After four years of data gathering from NIRSPEC, we have obtained and studied spectra from more than 50 brown dwarfs, and analyzed the variations,” McLean said. “Astronomers in the future will be able to obtain the infrared spectrum of a newly discovered brown dwarf and compare the spectrum with those we have published and instantly identify what kind of brown dwarf they have found. Probing more distant regions of the galaxy to study the youngest, recently-formed brown dwarfs is the next step.”

His research, including NIRSPEC, was funded by the California Association for Research in Astronomy, the entity that operates the W.M. Keck Observatory.

To do his research, McLean designs and builds spectrometers, and analyzes astrophysics data.

“The astronomy motivates me, but I have to be a bit of an engineer and experimental physicist as well,” he said, “because technology is the key to new discoveries.”