The story began with observations by Justin Steinfadt, a UC Santa Barbara, or UCSB, physics graduate student. He has been monitoring white dwarf stars as part of his Ph.D. thesis with Lars Bildsten, a professor on the faculty of UCSB’s Kavli Institute for Theoretical Physics (KITP), and Steve Howell, an astronomer at the National Optical Astronomy Observatory (NOAO) in Tucson, Arizona.

During observations of the star NLTT 11748 with the Faulkes Telescope North of the Las Cumbres Observatory Global Telescope (LCOGT), the astronomers discovered brief eclipses of white dwarfs. NLTT 11748 is one of the few very low-mass, helium-core white dwarfs under careful study for brightness variations. White dwarf stars are very dense remnants of medium-sized stars like the Sun. A star becomes a white dwarf when it has exhausted all of its nuclear fuel and only the dense inner core, typically made of carbon and oxygen, remains.

The astronomers took rapid snapshots of the star –– about one exposure every minute –– and found a few consecutive images where the star was slightly fainter. Steinfadt quickly realized the importance of this unexpected discovery. The white dwarf stars were eclipsing each other.

“We’ve been looking at a lot of stars, but I still think we got lucky,” he said.

Avi Shporer, a postdoctoral fellow at UCSB and LCOGT, assisted with the observations and quickly brought his expertise to the new discovery. “We knew something was unusual, especially as we confirmed these dips the next night,” Shporer said. The scientists observed three-minute eclipses of the binary stars twice during the 5.6-hour orbit.

The excitement of the discovery and the need to confirm it rapidly led to the use of the 10-meter Keck I telescope and its High Resolution Echelle Spectrograph, or HIRES, five weeks later. The team also brought in David Kaplan, a Hubble Fellow and KITP postdoctoral fellow. Bildsten and Kaplan arranged for use of the Keck telescope by swapping precious observing time they had reserved for another project with Geoff Marcy at UC Berkeley. 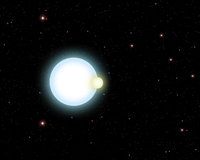 In this artist’s conception of the binary star NLTT 11748, the larger but less massive helium white dwarf star is partially eclipsed by the smaller but more massive normal white dwarf, which is about the size of the Earth. Image credit: Steve Howell/Pete Marenfeld/NOAO.

During that night, the scientists were able to measure the changing Doppler shift of the star NLTT 11748 as it orbited its faint, but more massive, white dwarf companion. “It was amazing to witness the velocity of this star change in just a few minutes,” said Kaplan, who was present at the Keck telescope during the observations.

The data provided the first direct radius measurement of a helium-core white dwarf, which are relatively rare. Until now, their size had never been measured. The results will appear in the June edition of the Astrophysical Journal Letters.

The measurements confirm the theory that even though these dead stars are a tenth to a twentieth the mass of Sun, they are larger than ordinary white dwarfs.

“The formation of such a binary system containing an extremely low mass helium white dwarf has to be the result of interactions and mass loss between the two original stars,” Howell said.

The other star in this binary is a more ordinary white dwarf composed of mostly carbon and oxygen. It has about 70 percent of the mass of the Sun and is more massive but much smaller than and only a thirtieth as bright as the helium-core white dwarf star.

“A particularly intriguing possibility to ponder is what will happen in six to 10 billion years,” said Bildsten. “This binary is emitting gravitational waves at a rate that will force the two white dwarfs to make contact. What happens then is anybody’s guess.”