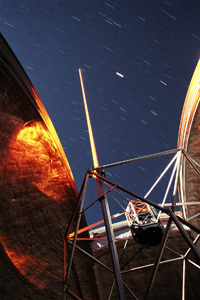 Black Holes, the most powerful destroyers in the Universe, the most mysterious phenomena in the heavens. For years they were only speculation, now modern astronomy is proving them frighteningly real and showing that they may well shape everything we see.
—Discovery Channel

Learn more about the most “powerful destroyers” in the cosmos during the hour-long feature How the Universe Works: Black Holes. The new documentary will air on the Discovery Channel on Sunday, May 2.

The program will include an explanation of how MacArthur Genius Andrea Ghez of UCLA uses the Keck II telescope and its Laser Guide Star Adaptive Optics to study the stars orbiting closest to the Milky Way’s central supermassive black hole.

For updates on airtime, check the Discovery Channel’s TV schedule.