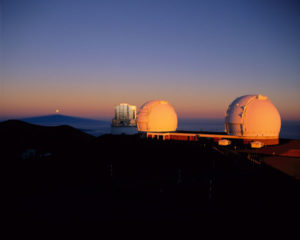 richard wainscoat, institute for astronomy, uh hawaii (c)
New findings from the Keck 10-meter twin telescopes will be presented at the 2004 Keck Science Meeting at the UCLA Campus at Moore Hall in Los Angeles on September 17.

MAUNA KEA, Hawaii (August 27th, 2004) New images of the galactic center will be presented at the 2004 Keck Science Meeting on September 17 at the UCLA Campus in Los Angeles. The new pictures clearly show hot plasma material being devoured by a black hole at the center of the Milky Way galaxy, about 24,000 light years away. The findings were made possible by a new laser guide star system on the Keck II telescope at Mauna Kea which is giving some of the clearest, highest resolution images ever taken of a region near a black hole. A wide-field mosaic image of the galactic center and an animated movie of the plasma flare will be released to the public September 17th.

The Keck Science Meeting is open to members of the California Association for Research in Astronomy (CARA), California Institute of Technology (Caltech), National Aeronautics and Space Administration (NASA), University of California, University of Hawaii Institute for Astronomy, and the Telescope System Instrumentation Program, which is managed by the National Optical Astronomy Observatory (NOAO) for the National Science Foundation (NSF).

A live, remote broadcast of the meeting will take place at W. M. Keck Observatory headquarters in Waimea.

Members of the media may attend by contacting the Public Information and Outreach Office at the W. M. Keck Observatory.

The Keck Science Meeting is an annual gathering of the Keck user community to discuss scientific discoveries made possible with the world’s two largest telescopes, the Keck I and Keck II optical and infrared telescopes at Mauna Kea, Hawaii. Meeting venues alternate between Caltech and UC campuses and are coordinated by the Observatory’s Science Steering Committee. Participants include many familiar icons in astronomy, many of which have been recognized for significant efforts which have shaped the field of astronomy.

The September 17th meeting will consist of several short, 15-minute science talks followed by poster sessions during breaks. Attendees typically share works in progress and collaborate on new findings. A Director’s Report will update the group on new projects and instruments which are improving the performance and capabilities of the Keck Observatory. The meeting will conclude with an informal reception called, “Talk to the Director” where participants will be able to pose questions to the Director, Dr. Frederic Chaffee. The meeting takes place at Moore Hall on the UCLA Campus, in Los Angeles.

The local coordinator for the meeting is Dr. Ian McLean of UCLA, who also serves as co-chairman of the W. M. Keck Observatory Science Steering Committee with co-chairman Dr. George Djorgovski of the California Institute of Technology. Deadline for registration is Friday, September 3, 2004.

The Keck Science Meeting is sponsored by the University of California, the California Institute of Technology and the California Association for Research in Astronomy (CARA).