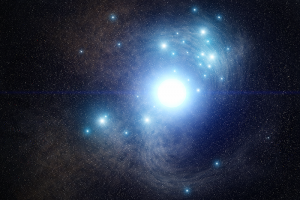 The supernova, known as a type Ic, is thought to detonate after a massive star has shed or been stripped of its outer layers of hydrogen and helium.

These stars could be among the most massive known — at least 30 times more massive than our own Sun. Even after shedding some of their material late in life, they remain very large and bright.

So it was a mystery as to why astronomers had not been able to nab one of these stars in pre-explosion images.

Finally, in 2017, astronomers got lucky. A nearby star ended its life as a type Ic supernova. Two teams of astronomers pored through the archive of Hubble images to uncover the presumed precursor star in pre-explosion photos taken in 2007. The supernova, catalogued as SN 2017ein, appeared near the center of the nearby spiral galaxy NGC 3938, located roughly 65 million light-years away.

This discovery could yield important insights into stellar evolution, including how the masses of stars are distributed when they are born in batches.

“Finding a bona fide progenitor of a supernova Ic is a big prize of progenitor searching,” said Schuyler Van Dyk of the California Institute of Technology (Caltech) in Pasadena, lead researcher of one of the teams. “We now have for the first time a clearly detected candidate object.”

His team’s paper was published in June in The Astrophysical Journal. 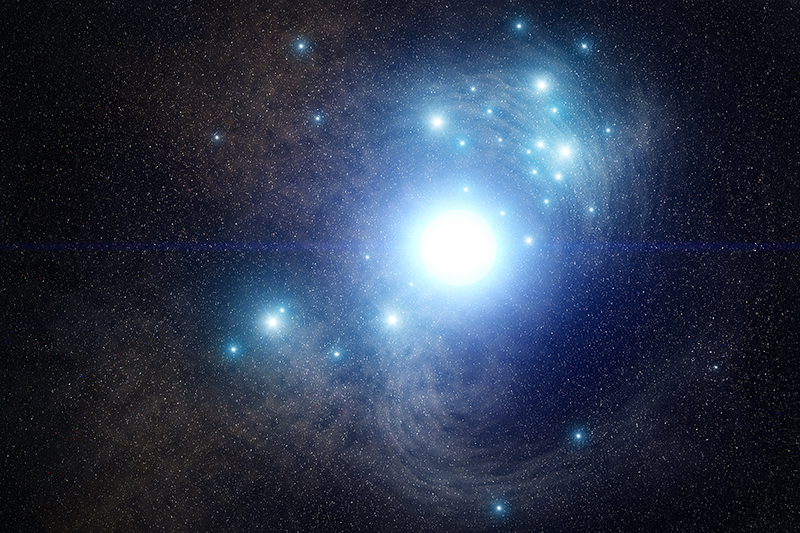 Artist’s Impression of Progenitor Star to a Type Ic Supernova: This is an artist’s concept of a blue supergiant star that once existed inside a cluster of young stars in the spiral galaxy NGC 3938, located 65 million light-years away. It exploded as a supernova in 2017, and Hubble Space Telescope archival photos were used to locate the doomed progenitor star, as it looked in 2007. The star may have been as massive as 50 suns and burned at a furious rate, making it hotter and bluer than our sun. It was so hot, it had lost its outer layers of hydrogen and helium. When it exploded in 2017, astronomers categorized it as a Type Ic supernova because of the lack of hydrogen and helium in the supernova’s spectrum. In an alternative scenario (not shown here) a binary companion to the massive star may have stripped off its hydrogen and helium layers. CREDIT: NASA/ESA/J. OLMSTED (STScI)

A second team led by Charles Kilpatrick of the University of California, Santa Cruz, also observed the supernova in June 2017 in infrared images, which were captured using Keck Observatory’s powerful adaptive optics system combined with its OH-Suppressing Infrared Imaging Spectrograph (OSIRIS). Kilpatrick’s team then analyzed the same archival Hubble photos as Van Dyk’s team to uncover the possible source. An analysis of the object’s colors shows that it is blue and extremely hot.

“This supernova occurred in a crowded part of its host galaxy. When we looked at a pre-explosion Hubble Space Telescope image, the stars appeared closely packed together,” said Kilpatrick. “This discovery was only made possible because we were able to use Keck Observatory to pinpoint the location of the supernova in its host galaxy. The extremely high-resolution image from Keck allowed us to determine with a high degree of precision exactly where the explosion occurred. This location happened to land right on top of a single, very blue, and luminous object in the pre-explosion Hubble image.”

The results from Kilpatrick’s team, which appeared in the Oct. 21, 2018, issue of the Monthly Notices of the Royal Astronomical Society, is consistent with the earlier team’s conclusions.

“We were fortunate that the supernova was nearby and very bright, about 5 to 10 times brighter than other type Ic supernovas, which may have made the progenitor easier to find,” said Kilpatrick. “Astronomers have observed many type Ic supernovas, but they are all too far away for Hubble to resolve. You need one of these massive, bright stars in a nearby galaxy to go off. It looks like most type Ic supernovas are less massive and therefore less bright, and that’s the reason we haven’t been able to find them.”

Because the object is blue and exceptionally hot, both teams suggest two possibilities for the source’s identity. The progenitor could be a single hefty star between 45 and 55 times more massive than our Sun.

Another idea is that it could have been a massive binary-star system in which one of the stars weighs between 60 and 80 solar masses and the other roughly 48 suns. In this latter scenario, the stars are orbiting closely and interact with each other. The more massive star is stripped of its hydrogen and helium layers by the close companion, and eventually explodes as a supernova.

The possibility of a massive double-star system is a surprise. “This is not what we would expect from current models, which call for lower-mass interacting binary progenitor systems,” Van Dyk said.

Expectations on the identity of the progenitors of type Ic supernovas have been a puzzle. Astronomers have known that the supernovas were deficient in hydrogen and helium, and initially proposed that some hefty stars shed this material in a strong wind (a stream of charged particles) before they exploded.

When they didn’t find the progenitors stars, which should have been extremely massive and bright, they suggested a second method to produce the exploding stars that involves a pair of close-orbiting, lower-mass binary stars.

In this scenario, the heftier star is stripped of its hydrogen and helium by its companion. But the “stripped” star is still massive enough to eventually explode as a type Ic supernova.

“Disentangling these two scenarios for producing type Ic supernovas impacts our understanding of stellar evolution and star formation, including how the masses of stars are distributed when they are born, and how many stars form in interacting binary systems,” explained Ori Fox of the Space Telescope Science Institute (STScI) in Baltimore, Maryland, a member of Van Dyk’s team. “And those are questions that not just astronomers studying supernovas want to know, but all astronomers are after.”

Type Ic supernovas are just one class of exploding star. They account for 21 percent of massive stars that explode from the collapse of their cores.

The teams caution that they won’t be able to confirm the source’s identity until the supernova fades in about two years. The astronomers hope to use either Hubble or the upcoming NASA James Webb Space Telescope to see whether the candidate progenitor star has disappeared or has significantly dimmed. They also will be able to separate the supernova’s light from that of stars in its environment to calculate a more accurate measurement of the object’s brightness and mass. 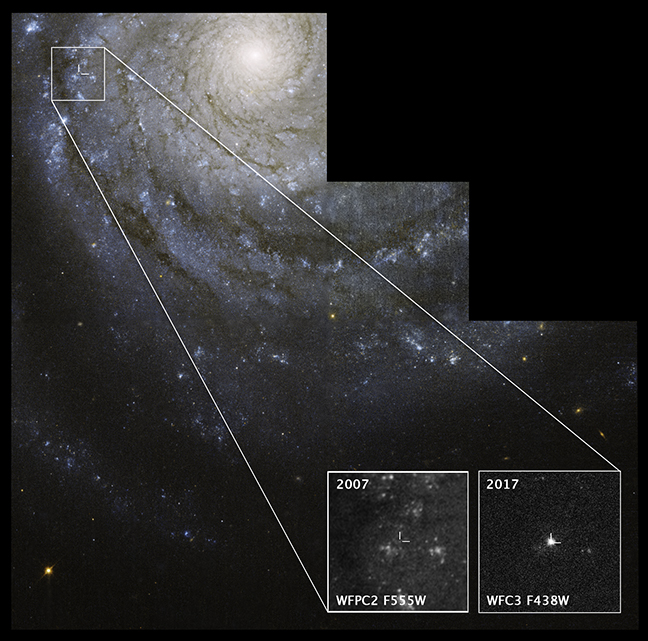 Astronomers Find a Supernova’s Progenitor Star in Hubble Images: This NASA Hubble Space Telescope image of the nearby spiral galaxy NGC 3938 shows the location of supernova 2017ein, in a spiral arm near the bright core. The exploded star is a type Ic supernova, thought to detonate after its massive star has shed or been stripped of its outer layers of hydrogen and helium. Progenitor stars to type Ic supernovas have been hard to find. But astronomers sifting through Hubble archival images may have uncovered the star that detonated as supernova 2017ein. The location of the candidate progenitor star is shown in the pullout box at bottom left, taken in 2007. The bright object in the box at bottom right is a close-up image of the supernova, taken by Hubble in 2017, shortly after the stellar blast. NGC 3938 resides 65 million light-years away in the constellation Ursa Major. The Hubble image of NGC 3938 was taken in 2007. CREDIT: NASA/ESA/S. VAN DYK (CALTECH)/W. LI (UNIVERSITY OF CALIFORNIA)

The OH-Suppressing Infrared Imaging Spectrograph (OSIRIS) is one of W. M. Keck Observatory’s “integral field spectrographs.” The instrument works behind the adaptive optics system, and uses an array of lenslets to sample a small rectangular patch of the sky at resolutions approaching the diffraction limit of the 10-meter Keck Telescope. OSIRIS records an infrared spectrum at each point within the patch in a single exposure, greatly enhancing its efficiency and precision when observing small objects such as distant galaxies. It is used to characterize the dynamics and composition of early stages of galaxy formation.

ABOUT THE HUBBLE SPACE TELESCOPE

The Hubble Space Telescope is a project of international cooperation between NASA and ESA (European Space Agency). NASA’s Goddard Space Flight Center in Greenbelt, Maryland, manages the telescope. The Space Telescope Science Institute (STScI) in Baltimore, Maryland, conducts Hubble science operations. STScI is operated for NASA by the Association of Universities for Research in Astronomy in Washington, D.C.