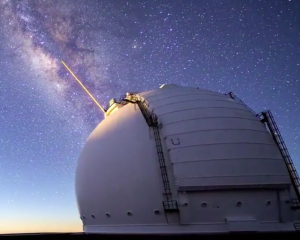 Maunakea, Hawaii – W. M. Keck Observatory presents its new film, “Beyond the Impossible,” which made its public debut on December 17, 2020, with over 300 people in attendance for the virtual screening.

The documentary picks up the story after the twin Keck I and Keck II telescopes achieved first light and chronicles the exciting Hawaii astronomical discoveries that followed, including Nobel Prize-winning research, as told by some of Keck Observatory’s community of science trailblazers and technology innovators who revolutionized the field, catapulting the Observatory into becoming the most scientifically impactful optical/infrared ground-based observatory on the planet.

“Beyond the Impossible” is the sequel to “The Impossible Telescope,” which was released in 2019 commemorating the legacy of Jerry Nelson. Known as the “Father of the Keck Observatory Telescopes,” the documentary explains how Nelson and his team pioneered the 10-meter segmented design of the primary mirrors that make up the heart of the Keck I and Keck II telescopes.

W. M. Keck Observatory wishes to recognize and acknowledge the very significant cultural role and reverence that Maunakea has always had within the Native Hawaiian community. We are most fortunate to have the opportunity to conduct observations from this mountain.

Mahalo to the generous support of the Rob and Terry Ryan Foundation for helping make these films possible.