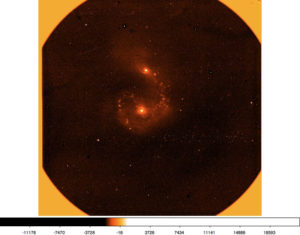 w. m. keck observatory
An unprocessed image from the MOSFIRE instrument made on the "first light" night of April 4, 2012. The powerful Keck I telescope and sensitive new instrument were able to gather this infrared image of two interacting galaxies called The Antennae, despite fast-moving high clouds over Mauna Kea that night.

Kamuela, HI ? Engineers and astronomers are celebrating the much anticipated first light of the MOSFIRE instrument, now installed on the Keck I telescope at W. M. Keck Observatory. MOSFIRE (Multi-Object Spectrometer For Infra-Red Exploration) will vastly increase the data gathering power of what is already the world?s most productive ground-based observatory.

?This is a near-infrared multi-object spectrograph, similar to our popular LRIS and DEIMOS instruments, only at longer wavelengths,? explained Keck Observatory Observing Support Manager Bob Goodrich. ?The MOSFIRE project team members at Keck Observatory, Caltech, UCLA, and UC Santa Cruz are to be congratulated, as are the observatory operations staff who worked hard to get MOSFIRE integrated into the Keck I telescope and infrastructure. A lot of people have put in long hours getting ready for this momentous First Light.?

The first images from MOSFIRE were made on the night of April 4, despite thick cirrus clouds over Mauna Kea. One subject was a pair of interacting galaxies known as The Antennae. Additional images and spectra were gathered on the night of April 5, as part of the continuing commissioning of the instrument.

MOSFIRE gathers spectra, which contain chemical signatures in the light of everything from stars to galaxies, at near-infrared wavelengths (that is, 0.97-2.45 microns, or millionths of a meter). Infrared is light which is beyond red in a rainbow?just beyond what human eyes can detect. Observing in the infrared allows researchers to penetrate cosmic dust clouds and see objects that are otherwise invisible, like the stars circling the supermassive black hole at the center of the Milky Way. It also allows for the study of the most distant objects, the light of which has been stretched beyond the red end of the spectrum by the expansion of the universe.

Astronomers plan to use MOSFIRE to study the time when most galaxies formed, as well as the so-called period of re-ionization, when the universe was just a half-billion to a billion years old. Other targets will be nearby stars, young stars and even brown dwarfs, which are stars not quite massive enough for normal nuclear fusion to ignite in their cores.

What sets MOSFIRE apart from other instruments is its vastly more light-sensitive camera and its ability to survey up to 46 objects at a time, then switch targets in just minutes. That?s an operation that takes comparable infrared instruments one to two days.

MOSFIRE can also scan the sky with a 6.1 arc minute field of view, which is about 20 percent of a full moon and almost a hundred times more sky than the Keck?s current near-infrared camera. To take spectra of multiple objects, the state-of-the-art spectrometer consists of 46 pairs of sliding bars that open and close like curtains. Aligned in rows, each pair of bars blocks the sky, leaving small slits between the bars which allow slivers of light from multiple stars or galaxies to be recorded. Light from each slit then enters the spectrometer, which breaks down the objects? light into their spectrum of wavelengths.

Because everything that?s even a little warm radiates infrared light, all infrared instruments must be kept cold to minimize any trace of heat from the ground, the telescope, or the instrument itself from contaminating the infrared signals from space, MOSFIRE is kept at a cool 120 Kelvins (about -243 degrees Fahrenheit or -153 degrees Celsius). Because of this, MOSFIRE is the largest cryogenic instrument on either of the Keck telescopes.

?We look forward to the rest of MOSFIRE commissioning, and the start of science operations,? said Goodrich.

The W. M. Keck Observatory operates two 10-meter optical/infrared telescopes on the summit of Mauna Kea on the Big Island of Hawaii. The twin telescopes feature a suite of advanced instruments including imagers, multi-object spectrographs, high-resolution spectrographs, integral-field spectroscopy and a world-leading laser guide star adaptive optics system which cancels out much of the interference caused by Earth?s turbulent atmosphere. The Observatory is a private 501(c) 3 non-profit organization and a scientific partnership of the California Institute of Technology, the University of California and NASA.