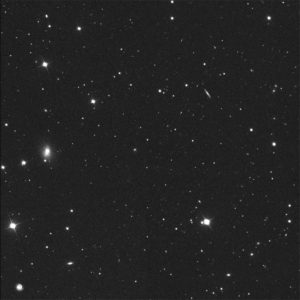 marla geha
This is the portion of sky in which astronomers found the Segue 1 dwarf galaxy. Can you see it?

Kamuela, HI – Astronomers using the 10-meter Keck II telescope in Hawaii have confirmed in a new paper that a troupe of about 1,000 small, dim stars just outside the Milky Way comprise the darkest known galaxy, as well as something else: a treasure trove of ancient stars.

By “dark” astronomers are not referring to how much light the galaxy, called Segue 1, puts out, but the fact that the dwarf galaxy appears to have 3,400 times more mass than can be accounted for by its visible stars. In other words, Segue 1 is mostly an enormous cloud of dark matter decorated with a sprinkling of stars.

The initial announcement of the “Darkest Galaxy” was made two years ago by Marla Geha, a Yale University astronomer, Joshua Simon from the Carnegie Institution of Washington, and their colleagues. This original claim was based on data from the Sloan Digital Sky Survey and the Keck II telescope. Those observations indicated the stars were all moving together and were a diverse group, rather than simply a cluster of similar stars that had been ripped out of the nearby and more star-rich Sagittarius dwarf galaxy. A competing group of astronomers at Cambridge University were, however, not convinced.

So Simon, Geha and their group returned to Keck and went to work with the telescope’s Deep Extragalactic Imaging Multi-Object Spectrograph (DEIMOS) to measure how the stars move not just in relation to the Milky Way, but also in relation to each other.

If the 1,000 or so stars were all there was to Segue 1, with just a smidgeon of dark matter, the stars would all move at about the same speed, said Simon. But the Keck data show they do not. Instead of moving at a steady 209 km/sec relative to the Milky Way, some of the Segue 1 stars are moving at rates as slow as 194 kilometers per second while others are going as fast as 224 kilometers per second.

“That tells you Segue 1 must have much more mass to accelerate the stars to those velocities,” Geha explained. The paper confirming Segue 1’s dark nature appeared in the May 2011 issue of The Astrophysical Journal.

The mass required to cause the different star velocities seen in Segue 1 has been calculated at 600,000 solar masses. But there are only about 1,000 stars in Segue 1, and they are all close to the mass of our Sun, Simon said. Virtually all of the remainder of the mass must be dark matter.

Stellar Old Folks Home
Equally exciting news from Segue 1 is its unusual collection of nearly primordial stars. One way to tell how long ago a star formed is by its heavy element content, which can be gleaned from the characteristic absorption features in the star’s spectrum. Very old or primitive stars come from a time when the universe was young and few large stars had yet grown old enough to fuse lightweight atoms like hydrogen and helium into heavier elements like iron and oxygen. Early, and therefore ancient, stars that formed from early gas clouds are therefore very low in heavy elements.

The researchers managed to gather iron data on six stars in Segue 1 with the Keck II telescope, and a seventh Segue 1 star was measured by an Australian team using the Very Large Telescope. Of those seven, three proved to have less than one 2,500th as much  iron as our own Sun.

“That suggests these are some of the oldest and least evolved stars that are known,” said Simon.

Searches for such primitive stars among the Milky Way’s billions have yielded less than 30.

“In Segue 1 we already have 10 percent of the total in the Milky Way,” Geha said. “For studying these most primitive stars, dwarf galaxies are going to be very important.”

Dark Matter Demolition Derby
The confirmation of the large concentration of dark matter in Segue 1 underscores the importance of other research that has focused on Segue 1. In particular, some researchers have been looking with the space-based Fermi Gamma Ray Telescope in hopes of catching sight of a faint glimmer of gamma rays which could be created, theoretically, by the collision and annihilation of pairs of dark matter particles.

So far the Fermi telescope has not detected anything of the sort, which isn’t entirely surprising and doesn’t mean the dark matter isn’t there, said Simon.

“The current predictions are that the Fermi telescope is just barely strong enough or perhaps not quite strong enough to see these gamma rays from Segue 1,” Simon explained. So there are hopes that Fermi will detect at least the hint of a collision.
“A detection would be spectacular,” said Simon. “People have been trying to learn about dark matter for 35 years and not made much progress. Even a faint glow of the predicted gamma rays would be a powerful confirmation of theoretical predictions about the nature of dark matter.”

In the meantime, astronomers suspect there are other, perhaps even darker dwarf galaxies hovering around the Milky Way, waiting to be discovered. “We’d like to find more objects like Segue 1,” Simon said.