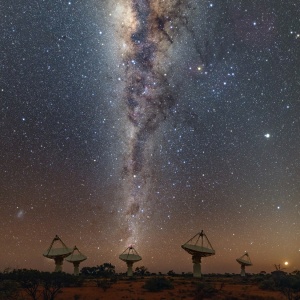 Maunakea, Hawaii – In a world first, an international team of astronomers has determined the precise location of a powerful one-off burst of cosmic radio waves.

The galaxy from which the burst originated was then imaged by three of the world’s largest optical telescopes – W. M. Keck Observatory, Gemini South, and the European Southern Observatory’s Very Large Telescope – and published online today in the journal Science.

“This is the big breakthrough the field has been waiting for since astronomers discovered fast radio bursts in 2007,” said CSIRO lead author Keith Bannister.

Since then, a global hunt has netted 85 of these bursts. Most have been ‘one-offs’ but a small fraction are ‘repeaters’ that recur at the same spot in the sky.

In 2017, astronomers found a repeater’s home galaxy but localizing a one-off burst has been unattainable, until now.

Fast radio bursts, as they are known, last less than a millisecond, making it difficult to detect them, and even harder to accurately measure where they have come from.

Bannister’s team developed new technology that can replay the data from when the burst occurred, allowing the location to be determined.

“It’s like looking at the Earth from the Moon and not only knowing what house a person lived in, but what chair they were sitting in at the dining room table,” Bannister said.

ASKAP is the first telescope to both find large numbers of fast radio bursts and identify their origins, thanks to its unique design and signal processing power.

“From these tiny time differences – just a fraction of a billionth of a second – we identified the burst’s home galaxy and even its exact starting point, 13,000 light-years out from the galaxy’s center in the galactic suburbs,” said co-author Adam Deller of Swinburne University of Technology.

Using the 10-meter Keck II telescope on Maunakea in Hawaii, the team, coordinated by J. Xavier Prochaska of University of California, Santa Cruz, measured its distance with the Keck Cosmic Web Imager (KCWI).

“The radio called, and Prochaska and Keck answered,” said co-author John O’Meara, Keck Observatory Chief Scientist. “It’s extremely exciting to see this result and the promise it shows for a new technique to understand both the bursts and the universe at large.”

“Identifying the galaxy that hosted the event and measuring its distance are key to figuring out what generates these enigmatic bursts,” said Prochaska. “Amazingly, the galaxy for FRB 180924 is completely different from the repeater’s home galaxy.”

“Independently,” added Prochaska, “These data offer an entirely new method to measure the amount of matter in the cosmos.”

This would reveal material that astronomers have struggled for decades to locate.

The cause of fast radio bursts remains unknown but the ability to determine their exact location is a big leap towards solving this mystery.

The localization of the radio burst was done as part of a science project using ASKAP called CRAFT (Commensal Real-time ASKAP Fast Transients Survey), which is jointly led by Bannister, Jean-Pierre Macquart of the International Centre for Radio Astronomy Research (ICRAR) at Curtin University, and Ryan Shannon of Swinburne University of Technology.

Shannon and CSIRO astronomer Shivani Bhandari carried out the observations and were the first to spot the burst.

ASKAP is located at CSIRO’s Murchison Radio-astronomy Observatory (MRO) in Western Australia and is a precursor for the future Square Kilometre Array telescope.

CSIRO acknowledges the Wajarri Yamaji as the traditional owners of the MRO site.