Astronomers Get Best View Yet of Supermassive Black Holes in Merging Galaxies, Slowly Moving on a Collision Course with Each Other 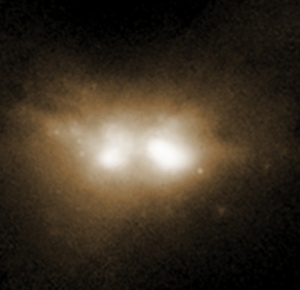 Maunakea, Hawaii – Two galaxies, drawn together by the force of gravity, are merging into a tangled mass of dense gas and dust. Structure is giving way to chaos, but hiding behind this messy cloud of material are two supermassive black holes, nestled at the center of each of the galaxies, that are now excitingly close, giving astronomers the best view yet of the pair marching toward coalescence into one mega black hole.

“Seeing the pairs of merging galaxy nuclei associated with “huge” black holes so close together was pretty amazing,” said study leader, Michael Koss of Eureka Scientific Inc. in Kirkland, Washington. “The images are pretty powerful since they are ten times sharper than images from normal telescopes on the ground. It’s similar to going from legally blind (20/200 vision) to perfect 20/20 vision when you put on your eyeglasses. In our study, we see two galaxy nuclei right when the images were taken. You can’t argue with it; it’s a very clean result which doesn’t rely on interpretation.”

The team’s results appear online in the November 7, 2018 issue of the journal Nature.

Koss and his team of researchers made the discovery after completing the largest systematic survey of nearby galaxies using high-resolution images taken with W. M. Keck Observatory’s adaptive optics (AO) system and near-infrared camera (NIRC2), along with over 20 years of archival Hubble Space Telescope images. With this survey, astronomers can pinpoint the type of galaxy most likely to harbor close pairs of supermassive black holes.

“This is the first large systematic survey of 500 galaxies that really isolated these hidden late stage black hole mergers that are heavily obscured and highly luminous,” said Koss. “It’s the first time this population has really been discovered. We found a surprising number of supermassive black holes growing larger and faster in the final stages of galaxy mergers.” 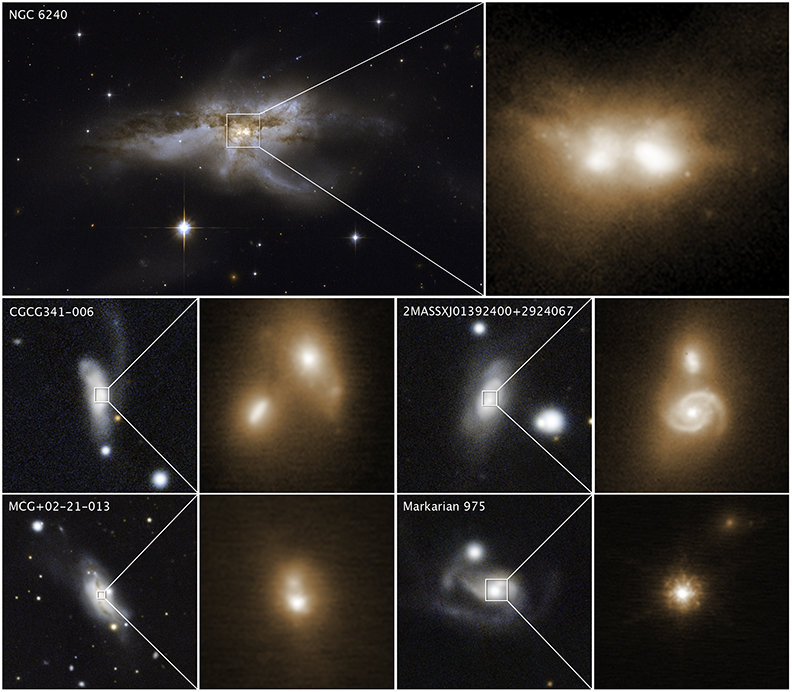 These images reveal the final stage of a union between pairs of galactic nuclei in the messy cores of colliding galaxies. The image at top left, taken by Hubble’s Wide Field Camera 3, shows the merging galaxy NGC 6240. A close-up of the two brilliant cores of this galactic union is shown at top right. This view, taken in infrared light, pierces the dense cloud of dust and gas encasing the two colliding galaxies and uncovers the active cores. The hefty black holes in these cores are growing quickly as they feast on gas kicked up by the galaxy merger. The black holes’ speedy growth occurs during the last 10 million to 20 million years of the merger. Images of four other colliding galaxies, along with close-up views of their coalescing nuclei in the bright cores, are shown beneath the snapshots of NGC 6240. The images of the bright cores were taken in near-infrared light by the W. M. Keck Observatory in Hawaii, using adaptive optics to sharpen the view. The reference images (left) of the merging galaxies were taken by the Panoramic Survey Telescope and Rapid Response System (Pan-STARRS). The two nuclei in the Hubble and Keck Observatory photos are only about 3,000 light-years apart — a near embrace in cosmic terms. If there are pairs of black holes, they will likely merge within the next 10 million years to form a more massive black hole. These observations are part of the largest-ever survey of the cores of nearby galaxies using high-resolution images in near-infrared light taken by the Hubble and Keck observatories. The survey galaxies’ average distance is 330 million light-years from Earth. CREDIT: NASA/ESA/M. KOSS (EUREKA SCIENTIFIC, INC.)/PAN-STARRS/W. M. KECK OBSERVATORY

It’s not easy finding galaxy nuclei so close together either. The late stage of the merger process is so elusive because the interacting galaxies kick up a lot of gas and dust, especially in the final, most violent stages of the merger. A thick curtain of material forms and shields the galaxy nuclei from view in visible light. Astronomers did not have the capability to observe this type of event until now.

“Heavily obscured galaxy nuclei don’t have a bright point source in the center like a lot of luminous unobscured supermassive black holes do,” said Koss. “But we were able to detect them thanks to X-ray data from the Burst Alert Telescope (BAT). We then used the superior laser capability of Keck Observatory’s AO system to perform high-resolution, near-infrared imaging to distinctly see a double nucleus through the gas and dust and uncover the hidden mergers.”

Koss and his team’s findings support the theory that galaxy mergers explain how some supermassive black holes become so monstrously large.

“There are competing ideas; one idea is that you have a bunch of gas in the galaxy that slowly feeds the supermassive black hole. The other is idea is that you need galaxy mergers to trigger large growth. Our data argues for the second case, that these galaxy mergers are really critical in fueling the growth of supermassive black holes,” said Koss.

This survey may also help astronomers observe a black hole merger. When supermassive black holes collide, not only do they create a mega black hole, they can also unleash powerful energy in the form of gravitational waves. These ripples in space-time, which were predicted by Einstein, were recently detected in 2016 by groundbreaking experiments.

Like a siren before a tsunami, gravitational waves reach Earth slightly earlier than light. In order to image such an event, astronomers need to know where to look and what object to look for. Gravitational wave detectors tell astronomers what area, and Koss’ research tells them whether that object is likely to host a supermassive black hole merger.

Koss and his team focused on galaxies with an average distance of 330 million light-years from Earth. Many of the galaxies are similar in size to the Milky Way. The images presage what will likely happen in our own cosmic backyard, in about a billion years, when our Milky Way merges with the neighboring Andromeda galaxy and their respective central black holes will smash together.

The next step for Koss and his team is to follow up on these hidden black hole mergers with Keck Observatory’s instrument, the OH-Suppressing Infra-Red Imaging Spectrograph (OSIRIS). OSIRIS will allow them to measure both the rotation rate and mass of the black holes, which would make it possible to estimate how long it will take before the supermassive black holes collide and how strong the gravitational wave signal might be. OSIRIS data will also look for signs to see if the two black holes are both growing simultaneously. 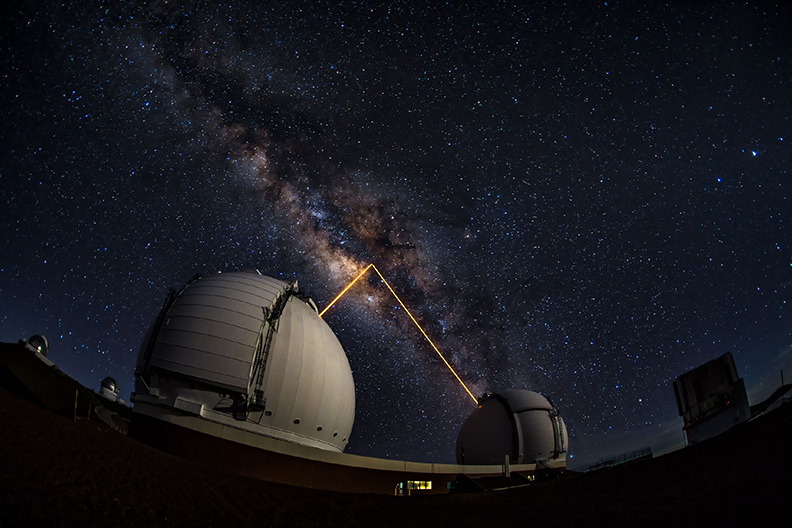