A Crisis in Cosmology 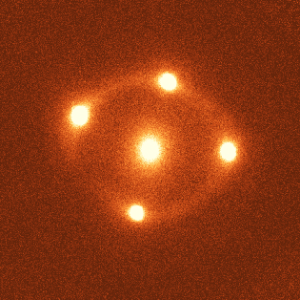 w. m. keck observatory's ao system was used for the first time to obtain the hubble constant by observing three gravitationally lensed systems, including he0435-1223 (pictured).

Maunakea, Hawaii – A group of astronomers led by University of California, Davis has obtained new data that suggest the universe is expanding more rapidly than previously thought.

The study comes on the heels of a hot debate over just how fast the universe is ballooning; measurements thus far are in disagreement.

The team’s new measurement of the Hubble Constant, or the expansion rate of the universe, involved a different method. They used NASA’s Hubble Space Telescope (HST) in combination with W. M. Keck Observatory’s Adaptive Optics (AO) system to observe three gravitationally-lensed systems. This is the first time ground-based AO technology has been used to obtain the Hubble Constant.

“When I first started working on this problem more than 20 years ago, the available instrumentation limited the amount of useful data that you could get out of the observations,” says co-author Chris Fassnacht, Professor of Physics at UC Davis. “In this project, we are using Keck Observatory’s AO for the first time in the full analysis. I have felt for many years that AO observations could contribute a lot to this effort.”

The team’s results are published in the latest online issue of the Monthly Notices of the Royal Astronomical Society.

To rule out any bias, the team conducted a blind analysis; during the processing, they kept the final answer hidden from even themselves until they were convinced that they had addressed as many possible sources of error as they could think of. This prevented them from making any adjustments to get to the “correct” value, avoiding confirmation bias.

“When we thought that we had taken care of all possible problems with the analysis, we unblind the answer with the rule that we have to publish whatever value that we find, even if it’s crazy. It’s always a tense and exciting moment,” says lead author Geoff Chen, a graduate student at the UC Davis Physics Department.

The unblinding revealed a value that is consistent with Hubble Constant measurements taken from observations of “local” objects close to Earth, such as nearby Type Ia supernovae or gravitationally-lensed systems; Chen’s team used the latter objects in their blind analysis.

The team’s results add to growing evidence that there is a problem with the standard model of cosmology, which shows the universe was expanding very fast early in its history, then the expansion slowed down due to the gravitational pull of dark matter, and now the expansion is speeding up again due to dark energy, a mysterious force.

This model of the expansion history of the universe is assembled using traditional Hubble Constant measurements, which are taken from “distant” observations of the cosmic microwave background (CMB) – leftover radiation from the Big Bang when the universe began 13.8 billion years ago.

Recently, many groups began using varying techniques and studying different parts of the universe to obtain the Hubble Constant and found that the value obtained from “local” versus “distant” observations disagree.

“Therein lies the crisis in cosmology,” says Fassnacht. “While the Hubble Constant is constant everywhere in space at a given time, it is not constant in time. So, when we are comparing the Hubble Constants that come out of various techniques, we are comparing the early universe (using distant observations) vs. the late, more modern part of the universe (using local, nearby observations).”

This suggests that either there is a problem with the CMB measurements, which the team says is unlikely, or the standard model of cosmology needs to be changed in some way using new physics to correct the discrepancy.

Though quasars are often extremely far way, astronomers are able to detect them through gravitational lensing, a phenomenon that acts as nature’s magnifying glass. When a  sufficiently massive galaxy closer to Earth gets in the way of light from a very distant quasar, the galaxy can act as a lens; its gravitational field warps space itself, bending the background quasar’s light into multiple images and making it look extra bright.

With HE0435-1223, PG1115+ 080, and RXJ1131-1231, the team carefully measured those time delays, which are inversely proportional to the value of the Hubble Constant. This allows astronomers to decode the light from these distant quasars and gather information about how much the universe has expanded during the time the light has been on its way to Earth.

“One of the most important ingredients in using gravitational lensing to measure the Hubble Constant is sensitive and high-resolution imaging,” said Chen. “Up until now, the best lens-based Hubble Constant measurements all involved using data from HST. When we unblinded, we found two things. First, we had consistent values with previous measurements that were based on HST data, proving that AO data can provide a powerful alternative to HST data in the future. Secondly, we found that combining the AO and HST data gave a more precise result.”

Chen and his team, as well as many other groups all over the planet, are doing more research and observations to further investigate. Now that Chen’s team has proven Keck Observatory’s AO system is just as powerful as HST, astronomers can add this methodology to their bucket of techniques when measuring the Hubble Constant.

“We can now try this method with more lensed quasar systems to improve the precision of our measurement of the Hubble Constant. Perhaps this will lead us to a more complete cosmological model of the universe,” says Fassnacht.

W. M. Keck Observatory is a distinguished leader in the field of adaptive optics (AO), a breakthrough technology that removes the distortions caused by the turbulence in the Earth’s atmosphere.  Keck Observatory pioneered the astronomical use of both natural guide star (NGS) and laser guide star adaptive optics (LGS AO) on large telescopes and current systems now deliver images three to four times sharper than the Hubble Space Telescope at near-infrared wavelengths. Keck AO has imaged the four massive planets orbiting the star HR8799, measured the mass of the giant black hole at the center of our Milky Way Galaxy, discovered new supernovae in distant galaxies, and identified the specific stars that were their progenitors. Support for this technology was generously provided by the Bob and Renee Parsons Foundation, Change Happens Foundation, Gordon and Betty Moore Foundation, Mt. Cuba Astronomical Foundation, NASA, NSF, and W. M. Keck Foundation.