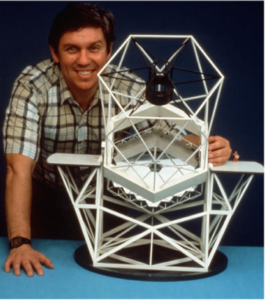 Jerry Nelson, the legendary designer of the Keck I & II telescopes, also known as the “Father of the Keck Observatory Telescopes,” passed away on June 10, 2017.

In remembrance of Jerry’s legacy, we spent the next year after his passing capturing his story by way of a documentary.

We are pleased to share with you this short film, where we journey back through time honoring the past, celebrating the present, and inspiring the future.

Learn more about Jerry and how Keck Observatory came to be – the vision, mission, and evolution of the most scientifically impactful optical/infrared twin telescopes on Earth, as told through the lenses of the people who are part of the observatory’s history and experienced the trials, tribulations, and successes of building what was once called “The Impossible Telescope.”

Mahalo to the generous support of the Rob and Terry Ryan Foundation for helping make this film possible, as well as to our dear friend Jerry, who continues to inspire us every time we see the heart of our telescopes.

Click on the video below to play. Length: 17 minutes.

ABOUT W. M. KECK OBSERVATORY
The W. M. Keck Observatory telescopes are the most scientifically productive on Earth. The two, 10-meter optical/infrared telescopes atop Maunakea on the Island of Hawaii feature a suite of advanced instruments including imagers, multi-object spectrographs, high-resolution spectrographs, integral-field spectrometers, and world-leading laser guide star adaptive optics systems. W. M. Keck Observatory is operated as a scientific partnership among the California Institute of Technology, the University of California, and the National Aeronautics and Space Administration. The Observatory was made possible by the generous financial support of the W. M. Keck Foundation. We wish to recognize and acknowledge the very significant cultural role that the summit of Maunakea has always had within the Native Hawaiian community. We are most fortunate to have the opportunity to conduct observations from this mountain.