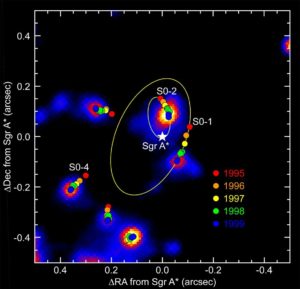 MAUNA KEA, Hawaii (September 21st, 2000) In an historic first, astronomers from the University of California-Los Angeles have observed acceleration in the velocities of individual stars orbiting the gigantic black hole at the center of our galaxy.
The astronomers, led by Andrea Ghez, UCLA professor of physics and astronomy, reported on five years of Keck telescope observations in the Sept. 21, 2000, issue of the science journal “Nature.”

Our own Earth, by contrast, orbits the Sun at a relatively sedate 67,000 miles per hour.

The determination of the acceleration of each of the stars also permitted the pinpointing of the actual center of our 100 billion-star swirl we call the Milky Way galaxy. Our galaxy is thought to be one of the 100 billion galaxies, each containing on average 100 billion stars, estimated to be within our sight with current technology. In just the past year, astronomers have reached the conclusion that most – if not all – of the major galaxies have black holes at their centers.

Determining the velocities of stars is nothing new for astronomers. It is a basic element in every introductory-college course in astronomy. But the UCLA/Keck measurements of the acceleration and galactic center mark a major step forward in the science of astronomy – they were conducted at a distance of more than 140,000 trillion miles.

“We are actually seeing stars begin to curve in their orbits,” said Ghez. “One of these stars may complete its orbit around the supermassive black hole in as little as 15 years. The light from these stars takes 24,000 light-years to get to us, and we’re talking about a complete orbit in perhaps as few as 15 years!”

The two closest stars are only 10 light-days from the black hole – or about 80 billion miles – but Ghez predicts they will continue to orbit the enormous black hole and not be swallowed by it. By contrast, our Solar system’s most massive planet, Jupiter, orbits the Sun at a distance of about 480 million miles every 11.8 years.

Such super-distant observations of our galaxy’s core have been impossible until recently. Ghez achieved the ultra-fine resolution with the combination of a 10-meter telescope, a Caltech near-infrared camera and a highly-sophisticated computerized imaging technique that she perfected.

Writing about Ghez’s work in the same issue of “Nature,” John Kormendy, a former professor at the University of Hawaii-Manoa and who now holds an endowed chair in astronomy at the University of Texas, Austin, said that astronomers who study the center of a galaxy “generally observe a snapshot of objects that change only on time scales of millions or billions of years. There is something quite grand in the realization that we can expect, with good health and a little luck, to see the galactic center rotate once in our lifetimes.”

Ghez has recorded the highest-resolution images of the galactic center ever obtained. All were obtained at the W.M. Keck Observatory. “Keck is the best facility in the world for this research,” she said. “(It) enables us to track stars very precisely.”

Keck’s resolution is so high, Ghez said, that the galactic center observations are similar to a Mauna Kea telescope detecting two flies in Japan buzzing less than 10 feet away from each other.

The UCLA/Keck observations reveal the enormous gravitational effects of the unseen object called a black hole at the heart of our galaxy. Our galaxy’s black hole is a region of space radically distorted by the equivalent mass of 2.6 million of our Suns compacted into a region of space far smaller than our Solar system.

Super-massive stars can become black holes at the end of their lives when they blow up in spectacular supernovae. This event creates the majority of elements listed in a high-school chemistry class’s Periodic Table, and everything heavier than iron. Not of all of a star’s mass is blown into space. The central core – no longer generating the heat of fusion to resist the crushing force of gravity – can collapse into a super-dense neutron star perhaps 20 miles across and with each spoonful weighing millions of tons. If the core is big enough, the star will continue to collapse to a point of zero volume – a bizarre concept.

Yet, nearly a century ago, Einstein’s theory of general relativity predicted that such an object was not only possible, but probable because space itself is not separate from the objects within it. Rather, all are linked together. And gravity is their voice.

Where our black hole resides, like some sort of cosmic trampoline carrying the mother of all bowling balls, the “fabric” of space has wrapped around the enormous mass of these millions of crushed stars. The millions of star-masses has curved the space so sharply that nothing within a black hole, including light itself, can escape.

Ghez’s specialized observing technique essentially ignores the distortions incoming starlight suffers in its brief transit of our atmosphere, and penetrates the enormous cloud of dust and gas blocking all visible-light observations of our galactic center.

Infrared light penetrates this opacity. And in infrared “speckle interferometry,” thousands of very short “snapshots” freeze the atmospheric distortions. Ghez developed the complex algorithms – specific mathematical “maps” based on Fourier transform analysis – as well as the computer software necessary for stacking the thousands of images into a coherent image.

Traditional imaging techniques of the center of the galaxy image the stars closest to the galactic center as a big, fuzzy blob. Ghez’s technique, however, improves the resolution by a factor of 20, and enabled her team to follow the movement of individual stars from year to year.

In the Sept. 21 “Nature” paper, Ghez reports on the acceleration of three of the stars that are among the closest to the black hole; others may also be accelerating, but she has yet to measure that possibility and will need the next-generation adaptive-optics and near-infrared spectroscopic instruments now being fine-tuned on the Keck II telescope.

“The atmosphere blurs your vision,” Ghez said, “but speckle interferometry clears the picture up; it’s like putting on glasses. Think of seeing a coin that looks distorted at the bottom of a pond. We take thousands of freeze frames, and then can determine what is distorted and what is really at the bottom of the pond.”

In 1998, Ghez reported that the black hole, with a mass 2.6 million times that of our Sun lies at the center of our galaxy, 24,000 light years away. This discovery resolved a raging debate among astronomers that lasted for more than a quarter-century.

“We now know the location of the black hole so precisely,” Ghez said, “that’s it’s like someone in Los Angeles who can identify where someone in Boston is standing to within just over a yard, if you scale it out to 24,000 light years.”

For future images of the region, she will use a suite of even more sophisticated instruments: adaptive optics to remove atmospheric distortions in real-time; and a new infrared camera and spectrograph made at UCLA, which should enable her to see more of the densely packed stars in this region, and perhaps stars that are even closer to the black hole.

Until then, she uses the more primitive speckle technique, which takes eight hours to accomplish what will take 10 minutes on the new system.

“Speckle is a poor woman’s adaptive optics,” she said.

In the Sept 21 “Nature” paper, the UCLA astronomers also report that the density of dark matter is substantially greater than estimated from previous measurements, which further establishes that it is indeed a supermassive black hole, and not a more exotic form of matter, Ghez said.

“Our galaxy is rather mild-mannered and quiet, and was one of the least likely galaxies to have a black hole at its center,” Ghez said. “Black holes cannot be seen directly, but their influence on nearby stars is very visible, and provides a signature.”

The galactic center is located in the constellation Sagittarius, due south in the summer sky. The black hole at the center of our galaxy came into existence billions of years ago, perhaps as very massive stars collapsed at the end of their life cycles and coalesced into a single, supermassive object.

Ghez’s research is supported by the National Science Foundation and the Packard Foundation.