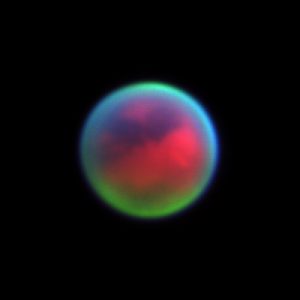 In this near-infrared color composite image taken with the Keck II telescope and adaptive optics system, Titan’s surface appears red, while haze layers at progressively higher altitudes in the atmosphere appear green and blue. These colors correspond to images taken through wavelength filters centered at 2.06, 2.13 and 2.27 microns.

Cassini’s controllers maneuvered the spacefaring robot to within 1600 km of the surface on this pass, skimming through the uppermost regions of Titan’s thick, hazy atmosphere.

The W. M. Keck Observatory (www.keckobservatory.org) is run by the California Association for Research in Astronomy (CARA), a nonprofit scientific partnership among Caltech, the University of California, and NASA.