Keck Observatory in the Community 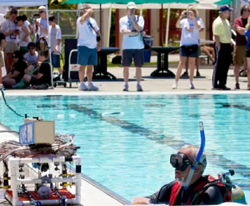 Steve Doyle, an instrument and optics technician at the Observatory, checks out one of the underwater robots entered in the 2010 International R.O.V. competition. Credit: Baron Sekiya, Hawaii 24/7.com.

David Lynn pulls his mask over his eyes, repositions his SCUBA tank and sinks below the water’s surface. While he could be diving anywhere along the coast of Hawai’i Island, in May and June of 2010 he chose to submerge into the depths of the University of Hawai’i-Hilo’s Olympic-size swimming pool.

Lynn, a support technician at Keck Observatory, wasn’t interested in seeing the pool’s marine life, if there happened to be any. Instead, he watched as underwater robots explored the pool’s bottom in the ninth annual International Student Remote Operated Vehicle, or R.O.V., Competition and the fifth annual Big Island R.O.V. Regional, or BIRR, Competition.

While the mission of Keck Observatory is to advance the frontiers of astronomy and share its discoveries with the world, the organization’s educational influence goes far beyond understanding the cosmos. Through formal and informal events and mentorships such as the R.O.V. competitions, Observatory employees like Lynn share their expertise in not only science, but also engineering, mechanics and other fields. As a result of these hands on teaching opportunities, several island schools and clubs have won regional titles in competitions such as R.O.V., SolidWorks CAD and BotBall and then gone on to qualify for national and international events, and, each year, more than 50,000 people learn about the Observatory through its education efforts.

Keck’s commitment to this level of exposure is reflected formally by a “two percent policy,” where employees are encouraged to dedicate two percent of their annual work plan to community service projects. 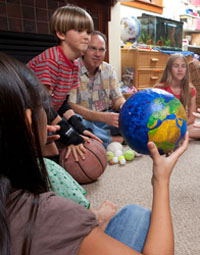 Astronomer and education team member Greg Wirth leads an activity showing students how distant Earth is from the Sun in a scale model of the Solar System. Credit: Rick Peterson.

“This policy is more than just a token ideal. It has a real dollar amount if you calculate two percent of the Observatory’s labor budget. It’s a significant financial contribution to helping the community,” says Keck astronomer Randy Campbell. “And, it sends a strong message about our commitment to our mission, to our neighbors and to education.”

In both the 2010 regional and international R.O.V contests, Keck employees judged projects and assisted students as they operated underwater rovers from the pool deck. The challenge was to maneuver the robots through a simulation of the Lo’ihi seamount, an undersea volcano off the coast of Hawai’i Island. The mission also tasked teams to deploy instruments, take sensor readings, plot data and collect samples of mock-up geologic features and the organisms that inhabit the volcano’s flanks.

“Judging is a lot of work, but a heck of a lot of fun,” says Andrew Cooper, an electronics engineer at Keck Observatory, who scored entries in the recent R.O.V. competitions. “As an engineer, it’s gratifying to see kids not only trying at an engineering challenge, but succeeding far beyond what I would have expected.”

The first regional R.O.V. competition was held on Hawai’i Island in 2006. Over the past five years, it has grown from eight teams to 15, and from eight Keck employees serving as judges to 14 current and four past Observatory volunteers. In the international competition, seven Keck employees judged projects submitted by more than 60 teams representing the U.S., Canada, Hong Kong, Scotland, Russia, Taiwan and Mexico. Summit technicians, including Lynn, also engaged students after the competition when they visited the summit of Mauna Kea and the Observatory’s summit facility visitor center.

The center at the summit facility and the visitor center located at Keck Observatory headquarters in Waimea provide island residents and tourists with a daily resource for learning more about the astronomy done on Mauna Kea and with the 10-meter Keck telescopes.

Keck’s Open House events and monthly Astronomy Lectures also attract astronomy and technology enthusiasts of all ages and engage them in astronomy, science and engineering activities on a large-scale.

At the classroom level, a dedicated group of Observatory staff leads hands-on science activities and provides curriculum and technical expertise to more than 1,000 K-12 students each year through field trips, stargazing programs and school visits.

An even larger number of Keck employees volunteer to support school science fair competitions, to foster women in science through GEMS, or Girls in Engineering, Math and Science, and to lead teams in BotBall and Hawai’i Electric Car Competitions.

In 2008, four Observatory employees mentored the Honoka’a Robotics Club, which was named the “Rookie All Star” team of that year’s Hawai’i Regional FIRST, or For Inspiration and Recognition of Science and Technology, Tournament.

As a result, the club was invited to the National Competition in Atlanta, Ga., “a totally unexpected boost to the team since it was their first year in the competition,” says software engineer Elizabeth Chock, who mentored the group and judged projects in the 2010 R.O.V. competitions.

“It’s that mentorship and really all of Keck’s educational efforts that build a sense of community,” she says. “It’s great that the Observatory can be involved and ultimately be ‘a good neighbor’.”