Keck Observatory Redirects Photons to Save 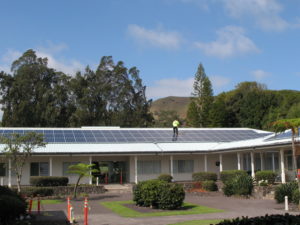 If you have been through Waimea lately, you’ve probably noticed a great deal of work taking place on the roofs of the W. M. Keck Observatory headquarters buildings, with installers scrambling across the blue rooftops, carrying long sections of rail and large panel. Installation of a 100kW solar power array – the maximum allowed by HELCO – is well underway.

Typically, Keck Observatory avoids the Sun, the great telescopes atop the mountain opening after the it sinks below the horizon and closing in the dawn. In this case, we are harnessing the power of our nearest star to save both money and pollution.

The decision to go solar was a lengthy one. There was a project exploring the possibility of wind generation. Last year, towers were erected in the front lawn to measure the potential of the beloved ka mamani. The towers have now been removed with the data collected and analyzed. Further number crunching showed that solar was the most cost effective solution and the decision was made to invest in a solar array for the complex.

While the photovoltaics are new, energy conservation has been the subject of much work around the observatory, both at headquarters in Waimea and at the summit facilities. Old lighting fixtures were replaced with more efficient models, as was older equipment such as pumps, motors and compressors with modern energy efficient design and the installation of computer control systems to intelligently manage energy use. These efforts have significantly reduced energy needs, but HELCO’s monthly charges are still quite substantial.

The new system will cover much of the available roof space, 696 solar panels in all. Each panel is capable of generating 250W in full sunshine. The system has been designed to account for the average weather in Waimea. Despite a reputation for clouds and misting rain, we receive a surprising amount of sunshine.

It is hoped that the photovoltaic system will save the observatory almost $60,000 per year. This is assuming that the rates will stay the same, when ever-increasing rates is a better assumption in this day and age. If the project is completed on schedule the system should be generating power before the end of the year.

With increasing electric rates, it was important for us to hedge our energy costs with a proven photovoltaic system.  While it can save us money in the long-term, since the system is a clean, renewable, and sustainable energy source, it’s good for Hawaii, too, not just Keck Observatory in reducing our carbon footprint.