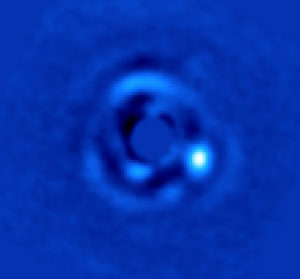 An image of the brown dwarf HIP 79124 B, which is separated from its host star by 23 astronomical units (an astronomical unit is the distance between our sun and Earth). The vortex coronagraph was used to suppress the much brighter host star, allowing its dim companion to be imaged for the first time. Credit: NASA/JPL-Caltech

MAUNAKEA, HAWAI’I – A new device on the W. M. Keck Observatory in Hawaii has delivered its first images, showing a ring of planet-forming dust around a star and, separately, a cool star-like body, called a brown dwarf, lying near to its companion star.

The device, called the vortex coronagraph, was recently installed inside the Near Infrared Camera 2 (NIRC2), the workhorse infrared imaging camera at Keck. The vortex coronagraph has the potential to image planetary systems and brown dwarfs closer to their host stars than was possible previously. It was invented in 2005 by Dimitri Mawet while he was at the University of Liège in Belgium. Mawet is currently associate professor of astronomy at Caltech and a senior research scientist at NASA’s Jet Propulsion Laboratory (JPL). The Keck vortex coronagraph was built by the University of Liège, Uppsala University in Sweden, JPL, and Caltech.

“The vortex coronagraph allows us to peer into the regions around stars where giant planets like Jupiter and Saturn supposedly form,” says Mawet. “Before now, we were only able to image gas giants that are born much farther out. With the vortex, we will be able to see planets orbiting as close to their stars as Jupiter is to our sun, or about two to three times closer than what was possible before.”

The new vortex results are presented in two papers, both published in the January 2017 issue of The Astronomical Journal. One study, led by Gene Serabyn of JPL, the overall lead of the Keck vortex project, presents the first direct image of the brown dwarf called HIP 79124 B. This brown dwarf is located 23 astronomical units from a star in a nearby star-forming region called Scorpius-Centaurus (an astronomical unit is the distance between our sun and Earth).

“The ability to see very close to stars also allows us to search for planets around more distant stars, where the planets and stars would appear closer together. Having the ability to survey distant stars for planets is important for catching planets still forming,” says Serabyn, who also led a team that tested a predecessor of the vortex device at the Hale Telescope at Caltech’s Palomar Observatory near San Diego. In 2010, the team took images of three planets orbiting in the distant reaches of the star system called HR 8799.

The second vortex study, led by Mawet, presents an image of the innermost of three rings of dusty planet-forming material around the young star called HD 141569 A. The results, when combined with infrared data from NASA’s Spitzer and WISE missions, and the European Space Agency’s Herschel mission, reveal that the star’s planet-forming material is made up of pebble-size grains of olivine, one of the most abundant silicates in Earth’s mantle. In addition, the data show that the temperature of the innermost ring imaged by the vortex is around 100 Kelvin (or minus 173 Celsius degrees), a bit warmer than our asteroid belt.

“The three rings around this young star are nested like Russian dolls and undergoing dramatic changes reminiscent of planetary formation,” says Mawet. “We have shown that silicate grains have agglomerated into pebbles, which are the building blocks of planet embryos.”

How the vortex sees planets

The first science images and results from the vortex instrument demonstrate its ability to image planet-forming regions hidden under the glare of stars. Stars outshine planets by a factor of a few thousand to a few billion, making the dim light of planets very difficult to see. The closer a planet is to its star, the more difficult it is to image. To deal with this challenge, researchers have invented Instruments called coronagraphs, which typically use tiny masks to block the starlight, much like blocking the bright sun with your hand or a car visor to see better.

What makes the vortex coronagraph unique is that it does not block the starlight with a mask, but instead redirects the light away from the detectors using a technique in which light waves are combined and canceled out. Because the vortex doesn’t require a mask, it has the advantage of taking images of regions closer to stars than other coronagraphs. Mawet likens the process to the eye of a storm.

“The instrument is called a vortex coronagraph because the starlight is centered on an optical singularity, which creates a dark hole at the location of the image of the star,” says Mawet. “Hurricanes have a singularity at their centers where the wind speeds drop to zero—the eye of the storm. Our vortex coronagraph is basically the eye of an optical storm where we send the starlight.”

A team at the University of Liège, led by Olivier Absil, designed a portion of the Keck vortex coronagraph called the phase mask, which consists of concentric microstructures that force the starlight waves to swirl about the mask’s center, creating the vortex singularity. This mask was forged at Uppsala University by Mikael Karlsson and his team, who etched the concentric microstructures into synthetic diamond. The etching is done in a plasma chamber where the diamond is bombarded by argon and oxygen ions, ripping the carbon atoms out of the diamond crystal.

The vortex was installed at Keck in the spring of 2015 by Keith Matthews, chief instrument scientist at Caltech, who has worked on dozens of astronomical instruments in his more than 50-year career at the Institute. The coronagraph was optimized and is operated with the help of the Keck Observatory staff. “Once the device is in there, users can operate it remotely from the base of the mountain or even from their home universities,” says Matthews.

What’s next for the vortex

In the future, the vortex will look at many more young planetary systems, in particular planets near the “ice lines,” which are the region around a star where temperatures have become cold enough for volatile molecules, such as water, methane, and carbon dioxide, to condense into solid icy grains. Ice lines are thought to delineate the transition between rocky planets and gas giants.

Surveys of the ice-line region by the vortex coronagraph will help answer ongoing puzzles about a class of hot, giant planets found extremely close to their stars—the “hot Jupiters” and “hot Neptunes.” Did these planets first form close to the ice lines and migrate in, or did they form in situ, right next to their star? “With a bit of luck, we might catch planets in the process of migrating through the planet-forming disk, by looking at these very young objects,” says Mawet.

This month, a privately funded project called Breakthrough Initiatives announced that it is partnering with the European Southern Observatory to use similar vortex technology to find and image a putative Earth-like planet in the nearby Alpha Centauri star system. What’s more, results from Keck’s vortex coronagraph will help with a planet imager planned for the future Thirty Meter Telescope and with proposed NASA space missions, such as the Habitable Exoplanet Imaging Mission (HabEx) and the Large UV/Optical/IR Surveyor (LUVOIR), which would use next-generation vortex coronagraphs currently being designed in Mawet’s group at Caltech.

The challenge of these facilities is to image planets even closer to their stars than those at the ice line, which includes Earth-like rocky planets. When combined with data from spectrograph instruments, which can identify molecules in planets’ atmospheres, the images could help astronomers identify possible signs of life.

“The power of the vortex lies in its ability to image planets very close to their star, something that we can’t do for Earth-like planets yet,” says Serabyn. “The vortex coronagraph may be key to taking the first images of a pale blue dot like our own.”

The W. M. Keck Observatory operates the largest, most scientifically productive telescopes on Earth. The two, 10-meter optical/infrared telescopes near the summit of Mauna Kea on the Island of Hawai’i feature a suite of advanced instruments including imagers, multi-object spectrographs, high-resolution spectrographs, integral-field spectrographs and world-leading laser guide star adaptive optics systems. Keck Observatory is a private 501(c) 3 non-profit organization and a scientific partnership of the California Institute of Technology, the University of California and NASA. For additional information regarding W.M. Keck Observatory, please visit http://www.keckobservatory.org/.