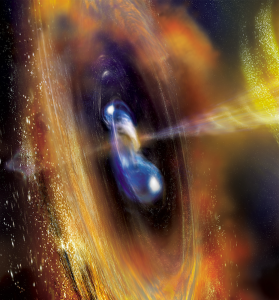 two neutron stars begin to merge in this illustration, blasting a jet of high-speed particles and producing a cloud of debris. scientists think these kinds of events are factories for a significant portion of the universe’s heavy elements, including gold.
Credit: A. Simonnet (Sonoma State University) and NASA’s Goddard Space Flight Center

Led by Northwestern University, a team of astrophysicists have uncovered new evidence that at least some long GRBs can result from neutron star mergers, which were previously believed to produce only short GRBs.

After detecting a 50-second-long GRB in December 2021, the team began searching for the long GRB’s afterglow, an incredibly luminous and fast-fading burst of light that often precedes a supernova. But, instead, they uncovered evidence of a kilonova, a rare event that only occurs after the merger of a neutron star with another compact object (either another neutron star or a black hole).

The research, which includes data from two Maunakea Observatories in Hawaiʻi, W. M. Keck Observatory and Gemini Observatory, is published in today’s issue of the journal Nature.

“This event looks unlike anything else we have seen before from a long gamma-ray burst,” said Jillian Rastinejad, a Northwestern Ph.D. student, who led the study. “Its gamma-rays resemble those of bursts produced by the collapse of massive stars. Given that all other confirmed neutron star mergers we have observed have been accompanied by bursts lasting less than two seconds, we had every reason to expect this 50-second GRB was created by the collapse of a massive star. This event represents an exciting paradigm shift for gamma-ray burst astronomy.”

“When we followed this long gamma-ray burst, we expected it would lead to evidence of a massive star collapse,” said Northwestern’s Wen-fai Fong, a senior author on the study. “Instead, what we found was very different. When I entered the field 15 years ago, it was set in stone that long gamma-ray bursts come from massive star collapses. This unexpected finding not only represents a major shift in our understanding but also excitingly opens up a new window for discovery.”

Fong is an assistant professor of physics and astronomy in Northwestern’s Weinberg College of Arts and Sciences and a key member of the Center for Interdisciplinary Exploration and Research in Astrophysics (CIERA). Rastinejad, a Ph.D. student in CIERA and member of Fong’s research group, is the paper’s first author.

The brightest and most energetic explosions since the Big Bang, GRBs are divided into two classes. GRBs with durations less than two seconds are considered short GRBs. If a GRB is longer than two seconds, then it’s considered a long GRB. Researchers previously believed that GRBs on either side of the dividing line must have different origins.

NASA’s Neil Gehrels Swift Observatory Burst Alert Telescope and the Fermi Gamma-ray Space Telescope first spotted the bright burst of gamma-ray light, named GRB211211A. The team then imaged the event at near-infrared wavelengths using Gemini Observatory in Hawaiʻi and the MMT Observatory in Arizona, which revealed an incredibly faint object that quickly faded. Supernovae don’t fade as quickly and are much brighter, so the team realized it found something unexpected that was previously believed impossible – a kilonova, which can only come from neutron star mergers. 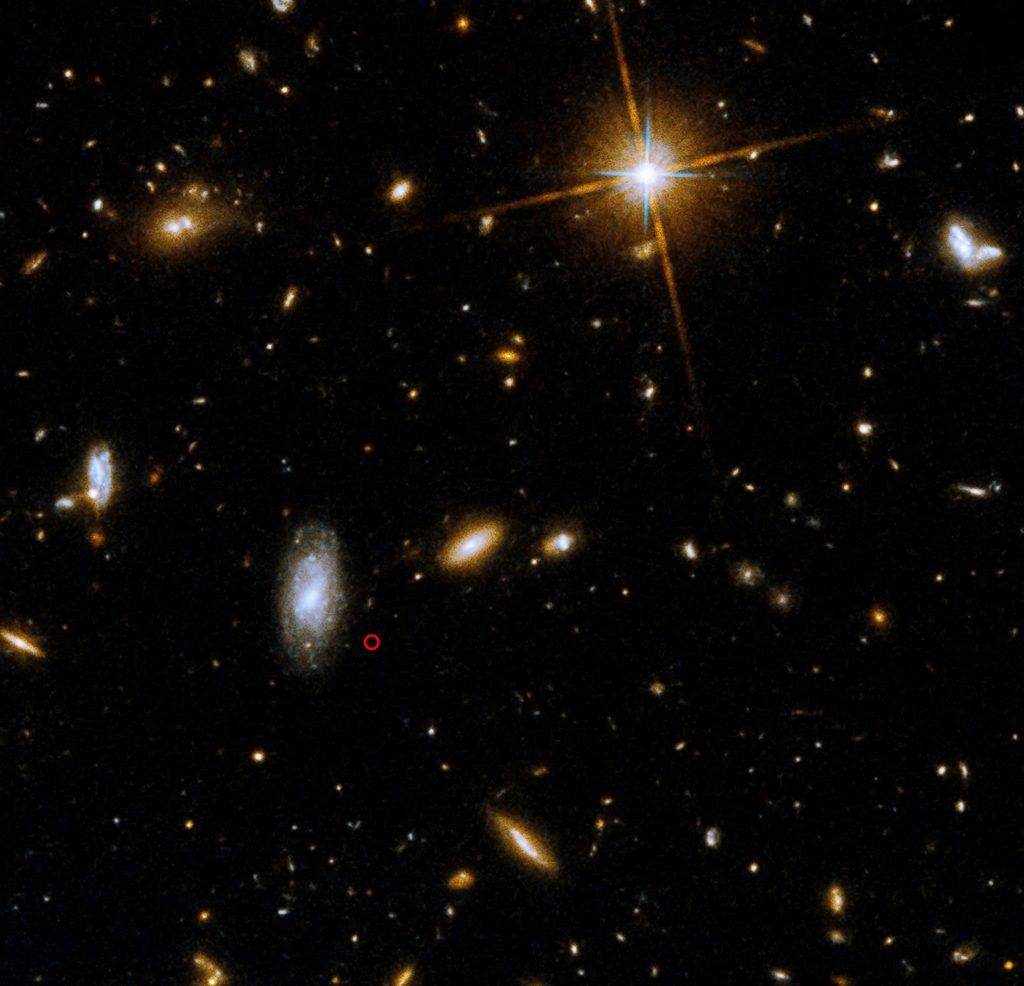 Gamma-ray burst 211211A, the location of which is circled in red, erupted on the outskirts of a spiral galaxy around 1 billion light-years away in the constellation Boötes. The NASA/ESA Hubble Space Telescope captured the image with its Wide Field Camera 3 and Advanced Camera for Surveys. Credit: NASA, ESA

The event wasn’t the only strange part of the study. The GRB’s host galaxy, named SDSS J140910.47+275320.8, is also quite curious. Using Keck Observatory’s DEep Imaging and Multi-Object Spectrograph (DEIMOS), the team was able to trace the GRB’s origins to a galaxy located about 1.1 billion light-years away — making GRB211211A one of the closest GRBs discovered to date.

Furthermore, the Keck Observatory data revealed the host galaxy is young and star-forming, almost exactly opposite of the only other known local universe host of a neutron star merger event: GW170817’s host galaxy NGC4993.

“After the detection of GW170817 and its association with a massive, red-and-dead host galaxy, many astronomers assumed that hosts of neutron star mergers in the near universe would look similar to NGC4993,” said Anya Nugent, a Northwestern graduate student and study co-author. “But this galaxy is fairly young, actively star-forming and not actually that massive. In fact, it looks more similar to short GRB hosts seen deeper in the universe. I think it changes our view of the types of galaxies we should watch when we’re searching for nearby kilonovae.”

In addition to challenging long-established beliefs about how long GRBs are formed, this new discovery also leads to new insights into the mysterious formation of the heaviest elements in the universe, such as platinum and gold. Although researchers have been able to study the astronomical factories that produce lighter elements, such as helium, silicon and carbon, astrophysicists posit that supernova explosions and neutron star mergers produce the heaviest elements. Clear signatures of their creation, however, are rarely observed.

“Kilonovae are powered by the radioactive decay of some of the heaviest elements in the universe,” Rastinejad said. “But kilonovae are very hard to observe and fade very quickly. Now, we know we can also use some long gamma-ray bursts to look for more kilonovae.”

With the James Webb Space Telescope (JWST) running, astrophysicists will be able to look for more clues within kilonovae. Because the JWST is capable of capturing images and spectra of astronomical objects, it can detect specific elements emitted from the object. Using the Webb, astrophysicists finally might obtain direct observational evidence of heavy elements’ formation.