LARGEST EXPLOSIONS IN UNIVERSE MAY COME FROM DEATH OF MASSIVE STARS 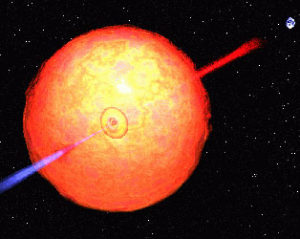 caltech/jonathan willams
Artist's conception of a gamma-ray burst from a massive star. In a manner of a few seconds, the iron core of a massive star implodes and a black hole is formed. Matter falls in to the black hole through an accretion disk. Energetic jets are formed which plow through the star, causing it to explode. A burst of gamma-rays is produced by the jets moving at relativistic speeds (that is, nearly the speed of light). At the same time, the exploding star becomes a supernova with a shock moving at sub-relavistic speeds. If one of the jets is pointing toward Earth (Earth is pictured here much closer to the explosion than possible), then we detect a burst of gamma-rays and a supernova explosion. If the jets are pointed away, then only a supernova is seen. In this way, the two brightest explosions in the Universe, may have a common origin: the death of a massive star.

WAIMEA, Hawaii (September 29th, 1999) Cosmic gamma-ray bursts, the brightest known explosions in the universe, may come from the fiery deaths of very massive stars in supernova explosions, a team of astronomers said today.

In a paper published Wednesday, Sept. 29, 1999, in the international science-journal Nature, an international team led by the California Institute of Technology presented evidence that the gamma-ray burst of March 26, 1998 (GRB 980326) is apparently associated with a supernova explosion. Key observational data taken at the Keck I telescope on Mauna Kea over a period of nine months led to this conclusion. The data indicates that some gamma-ray bursts are associated with the formation of black holes during the fiery deaths of very massive stars. If true, this would be some of the first direct evidence for what produces gamma-ray bursts.

As a consequence, the team suggests that a burst of gamma rays are seen when one of the jets from the supernova’s central black hole is pointed directly toward Earth. (The jets always project like a lighthouse beam from the “north” and “south” poles of the rapidly spinning remant of a dying star. An accretion disk forms around the “equator” of the remnant, as pictured in the artist’s rendition attached to this release).

Gamma-ray bursts are brilliant flashes of high-energy radiation that occur at seemingly random times and from random places in the sky. While these objects have been known since 1967, it was only recently demonstrated that these bursts originated from galaxies in the very distant universe and are by far the most brilliant bursts in the universe. This breakthrough was made possible due to the launch of the Italian-Dutch satellite BeppoSAX in 1996, which for the first time pinpointed the location of the bursts with a sufficient accuracy to enable their detailed studies with ground-based telescopes like the twin 10-meter giants at the W.M. Keck Observatory on Mauna Kea.

Despite the advances made recently in understanding the source of gamma-ray bursts, scientists are still left wondering what produces these spectacular explosions. Various theories of their possible origins still are debated vigorously, but there are currently two popular models. Both suggest that the bursts originate in a formation of a black hole.

In one model, two massive objects such as neutron stars or black holes (both of which may be end-products of previous supernova explosions) coalesce, forming a single massive black hole. In the second model, such a black hole is produced in a catastrophic collapse of the core of a massive star. In this model, one then expects two sources of light: the “afterglow” emission from the gamma-ray burst itself and light from the exploding star, a supernova. The gamma-ray afterglow rapidly declines whereas the supernova explosion gains in brightness over a period of a few weeks, and then gradually fades away.

The new study reports on the observations of GRB 980326 carried out at Keck. As in many other cases, a visible light afterglow was found following the burst, which then rapidly faded away. However, the Caltech-led team discovered something never previously observed – a dramatic rebrightening of optical emission at the position of the gamma-ray burst.

Shrinivas R. Kulkarni of the Caltech team explains, “A month after GRB 980326, it looked as though the host galaxy was dominating the light.” However, the next time the team observed, some eight months after the burst, the “galaxy” was gone.

“Galaxies do not just disappear, so we were astonished,” Kulkarni said. “Clearly, what we were seeing is a new source of light brightening one month and then fading away. This is something quite new.”
This unexpected rebrightening is now believed to be due to the underlying supernova created in the explosion of the massive star. The team had also obtained spectra of the object at different times, and that provided additional clues.

“The spectrum of the source right after the burst was blue, which is common,” said S. George Djorgovski of Caltech. “But after a month it was very red, which was unexpected. That alone suggested that we were looking at some different phenomenon happening at the same location, but with a time delay of a few weeks.”

Both the rebrightening and the spectrum changes are naturally explained by the presence of a supernova. The intensity of the apparent re-burst matches the peak brightness of a supernova seen in a distant galaxy, and its red spectrum also has the right color. This represents the most direct evidence to date in favor of the massive supernova model. In this scenario, a black hole is quickly formed in the center of a massive star whose core is unable to support itself against gravity.

When the star explodes, powerful jets from the central black hole emerge along the original axis of rotation, and gamma rays are created by the jets. If the jets are not pointed toward Earth, then we see only a supernova and the effects of the exploding star. But gamma rays as well as the light from the supernova arrive at Earth if the jets are pointing in our direction.

Joshua S. Bloom, a graduate student at Caltech and lead author of the paper said, “This appears to be the smoking gun for the origin of some gamma-ray bursts, a perfect marriage of the two brightest events in the universe. It is wonderful to be a part of such a discovery.”

Gamma-ray bursts, since their discovery some 30 years ago, have spawned more than 150 theoretical models about their possible origins, but only a handful are believed to be realistic possibilities in describing the true trigger of the bursts.

“It is possible that there are other causes for gamma-ray bursts such as the coalescence of neutron stars,” Bloom said. “Undoubtedly, astronomers will focus on unearthing new classes in the years to come.”

Early reports of the results created some excitement in the astronomical community. Two other groups, from universities of Amsterdam and Chicago, in view of the work presented by the Caltech team, have reanalyzed the data on some other gamma-ray bursts. They appear to find good evidence for an underlying supernova in another well-studied gamma-ray burst.

“It is encouraging to have had such a resounding reception to an unexpected result,” said Kulkarni. “Even some of the initial skeptics seem to be converted by these results.”

In addition to the members of the Caltech team, the other coauthors include M. Feroci of the BeppoSAX team; D. A. Frail of the National Radio Observatory; A. V. Filippenko, D. C. Leonard, A. G. Reiss, H. Spinrad, D. Stern, A. Bunker, B. Grossan, S. Perlmutter, and R. A. Knop of the University of California at Berkeley; A. Dey of the National Optical Astronomy Observatory; and I. M. Hook of the European Southern Observatory.