New Children’s Book Explores the Hunt for Other Worlds 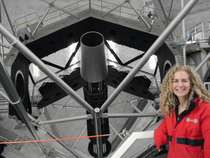 Planet Hunter: Geoff Marcy and the Search for Other Earths, published in 2010 by Boyds Mill Press, introduces readers to Dr. Geoff Marcy, the first American scientist to discover planets orbiting stars outside our solar system.

Throughout this 48-page book, readers get a personal view of what inspires Marcy and his colleagues. They learn about the astronomers’ techniques for searching for other planets and the astronomers’ appreciation for the opportunity to do astronomy in Hawai’i.

Marcy frequently visits Hawai’i to use Keck Observatory, where through long nights of observing, amazing discoveries have come from the unmatched views of the cosmos. Vicki Oransky Wittenstein, a prosecutor and advocate for children and families, wrote Planet Hunter to share the excitement of this island-based cutting edge science and technology with the next generation of explorers. Partnering with astronomy illustrator, Lynette Cook, island photographer Sarah Anderson, and others, the author recreates a fascinating, day-in-the-life account of Marcy as he probes deep space for worlds like our own.

“Is the Earth a one in a thousand shot, a one in a million shot?” Dr. Marcy wonders in the book, as he adjusts the controls on one of the computers in the telescope control room at the Keck Observatory. “Surely in this huge universe there are other planets that have conditions ripe for life. But are there ten in the Milky Way galaxy? A billion? Or is there only one, our Earth? And if there’s a planet like Earth, how likely is it to have intelligent life?”

Marcy relies on the Keck telescopes to answer these questions, and Planet Hunter captures the precise methodology he and his colleagues have developed to search for other worlds. The book showcases Marcy’s colleagues, the Observatory’s professional staff and the connection between today’s astronomers and the early Polynesian navigators. It also encourages children, and their parents, to further explore this dynamic field of scientific discovery.