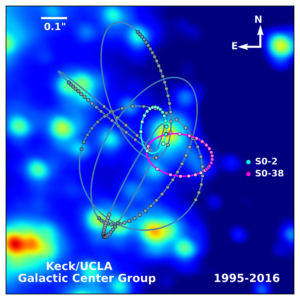 A UCLA-led team has discovered a new way of probing the hypothetical fifth force of nature using two decades of observations at W. M. Keck Observatory, the world’s most scientifically productive ground-based telescopes.

There are four known forces in the universe: electromagnetic force, strong nuclear force, weak nuclear force, and gravitational force. Physicists know how to make the first three work together, but gravity is the odd one out. For decades, there have been theories that a fifth force ties gravity to the others, but no one has been able to prove it thus far.

“This is really exciting. It’s taken us 20 years to get here, but now our work on studying stars at the center of our galaxy is opening up a new method of looking at how gravity works,” said Andrea Ghez, Director of the UCLA Galactic Center Group and co-author of the study.

The research is published in the current issue of Physical Review Letters.

Ghez and her co-workers analyzed extremely sharp images of the center of our galaxy taken with Keck Observatory’s adaptive optics (AO). Ghez used this cutting-edge system to track the orbits of stars near the supermassive black hole located at the center of the Milky Way. Their stellar path, driven by gravity created from the supermassive black hole, could give clues to the fifth force.

“By watching the stars move over 20 years using very precise measurements taken from Keck Observatory data, you can see and put constraints on how gravity works. If gravitation is driven by something other than Einstein’s theory of General Relativity, you’ll see small variations in the orbital paths of the stars,” said Ghez.

This is the first time the fifth force theory has been tested in a strong gravitational field such as the one created by the supermassive black hole at the center of the Milky Way. Historically, measurements of our solar system’s gravity created by our sun have been used to try and detect the fifth force, but that has proven difficult because its gravitational field is relatively weak.

“It’s exciting that we can do this because we can ask a very fundamental question – how does gravity work?” said Ghez. “Einstein’s theory describes it beautifully well, but there’s lots of evidence showing the theory has holes. The mere existence of supermassive black holes tells us that our current theories of how the universe works are inadequate to explain what a black hole is.”

Ghez and her team, including lead author Aurelien Hees and co-author Tuan Do, both of UCLA, are looking forward to summer of 2018. That is when the star S0-2 will be at its closest distance to our galaxy’s supermassive black hole. This will allow the team to witness the star being pulled at maximum gravitational strength – a point where any deviation to Einstein’s theory is expected to be the greatest.

W. M. Keck Observatory is a distinguished leader in the field of adaptive optics (AO), a breakthrough technology that removes the distortions caused by the turbulence in the Earth’s atmosphere. Keck Observatory pioneered the astronomical use of both natural guide star (NGS) and laser guide star adaptive optics (LGS AO) and our current systems now deliver images three to four times sharper than the Hubble Space Telescope. AO has imaged the four massive planets orbiting the star HR8799, measured the mass of the giant black hole at the center of our Milky Way Galaxy, discovered new supernovae in distant galaxies, and identified the specific stars that were their progenitors.

The W. M. Keck Observatory operates the most scientifically productive telescopes on Earth. The two, 10-meter optical/infrared telescopes on the summit of Maunakea on the Island of Hawaii feature a suite of advanced instruments including imagers, multi-object spectrographs, high-resolution spectrographs, integral-field spectrometers, and world-leading laser guide star adaptive optics systems. The Observatory is a private 501(c) 3 non-profit organization and a scientific partnership of the California Institute of Technology, the University of California, and NASA.