Nobel Prize in Physics awarded for Accelerating Expansion of the Universe 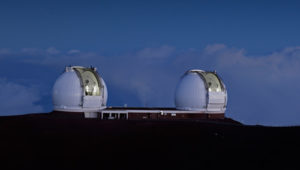 wmko
Observations made using the W. M. Keck Observatory on Mauna Kea were essential to the discovery of dark energy by 2011 Nobel Prize winners Perlmutter, Schmidt and Reiss.

The expansion of the universe is accelerating, and this is likely driven by dark energy, a mysterious repulsive force.  Three astronomers won the Nobel prize on Tuesday for their research on exploding stars, or supernovae, that led to this profound cosmological conclusion.  They are Saul Perlmutter of the Lawrence Berkeley National Laboratory in Berkeley, California, Brian P. Schmidt of the Australian National University in Weston Creek, Australia, and Adam G. Riess of the Space Telescope Science Institute and Johns Hopkins University in Baltimore, Maryland.  Their discovery relied fundamentally on spectroscopy using the W. M. Keck Observatory and its LRIS spectrograph, in the period 1995 to 1997.

Perlmutter, Schmidt and Riess were members of two competing teams who were both studying the most distant supernovae.  These Type Ia supernovae have been demonstrated to be “standard candles” and can thus yield relatively precise cosmological distances.  The Keck spectra of the extremely distant supernova candidates were essential in order to indicate they are Type Ia, and to determine the redshift, or its velocity as seen from Earth, of the galaxy hosting the supernova.  It was the redshifts and distances of a modest number of distant supernovae that revealed that the expansion of the universe was not slowing down, as was predicted, but in fact was inexplicably speeding up.  The accelerating expansion of the Universe, first reported in 1998, was confirmed by the two separate groups. This accelerating cosmological expansion and the hypothesis that it is driven by dark energy has now become one of the most important areas of study in astronomy and physics today.

At the time, “We were a little scared,” Schmidt said. Subsequent cosmological measurements have confirmed that roughly 70 percent of the universe by mass or energy consists of this anti-gravitational force called dark energy.

In fact, Albert Einstein introduced this bizarre behavior with a fudge factor in his equations in 1917 to stabilize the universe against collapse.  He later abandoned this idea, and then considered it his greatest blunder. “Every test we have made has come out perfectly in line with Einstein’s original cosmological constant in 1917,” Schmidt said.

In the years since then the three astronomers, along with their collaborators, have shared a number of awards, including the Shaw Prize in Astronomy, for this ground breaking research.

Perlmutter, who led the Supernova Cosmology Project out of Berkeley, will get half of the prize of 10 million Swedish kronor ($1.4 million). The other half will be shared between Dr. Schmidt, leader of the rival High-Z Supernova Search Team, and Riess, who was the lead author of the 1998 paper in The Astronomical Journal, in which the dark energy result was first published. They will receive their prizes in Stockholm on December 10.

“The recognition by the Nobel Committee of the importance of this work validates the enormous value to our society of ground-based optical / infrared astronomy,” said Taft Armandroff, Director of the W. M. Keck Observatory.  “By making our two Keck telescopes and their instruments work at the highest performance, transformational science like that of Saul Perlmutter, Brian Schmidt and Adam Riess happens.”

The W. M. Keck Observatory operates two 10-meter optical/infrared telescopes on the summit of Mauna Kea on the Big Island of Hawaii. The twin telescopes feature a suite of advanced instruments including imagers, multi-object spectrographs, high-resolution spectrographs, integral-field spectroscopy and a world-leading laser guide star adaptive optics system. The Observatory is a private 501(c) 3 non-profit organization and a scientific partnership of the California Institute of Technology, the University of California and NASA.