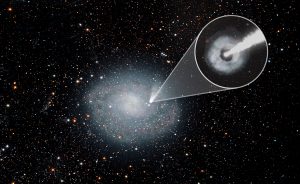 Maunakea, Hawaiʻi – A team of astronomers led by Northwestern University has created the most extensive inventory yet of the galaxies where short gamma-ray bursts (sGRBs) come from. Using several highly sensitive instruments at W. M. Keck Observatory on Maunakea, Hawaiʻi and other large observatories, combined with some of the most sophisticated galaxy modeling ever used in the field, the researchers pinpointed the galactic homes of 84 sGRBs.

“This is the largest catalog of sGRB host galaxies to ever exist, so we expect it to be the gold standard for many years to come,” said Anya Nugent, an astronomy graduate student at Northwestern University who led the research, observational efforts with Keck Observatory, and one of two publications about the study.

As an homage to the fact that sGRBs are among the brightest explosions in the universe, the team calls their catalog BRIGHT (Broadband Repository for Investigating Gamma-ray burst Host Traits) with all of their data and modeling products online for community use.

SGRBs are momentary flashes of intense gamma-ray light emitted when two neutron stars collide. While the gamma-rays last only seconds, the optical light can continue for hours before fading below detection, called an afterglow. SGRBs are some of the most luminous explosions in the universe with, at most, a dozen detected and pinpointed each year. 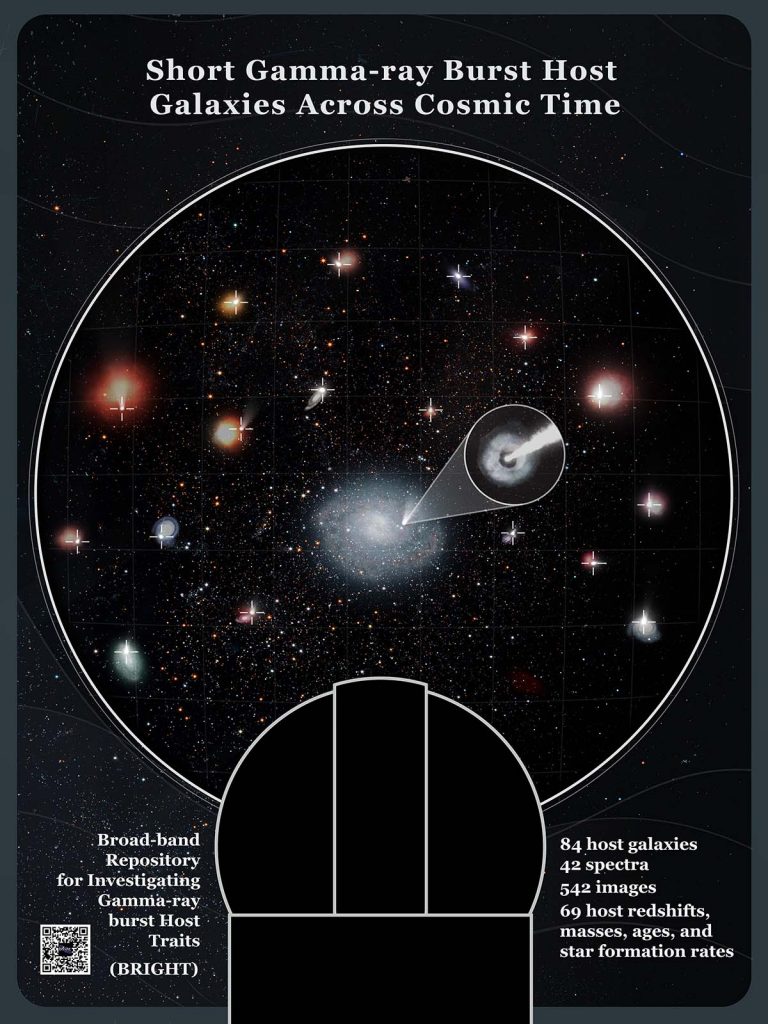 An artistic rendition of the diversity of short gamma-ray burst (sGRB) host environments, in large part discovered and characterized by Keck Observatory. SGRBs may occur in actively star-forming or dead galaxies, nearby or deep into the universe, and close or far from their host’s centers. All data is publicly available on the BRIGHT website (bright.ciera.northwestern.edu). Credit: W. M. Keck Observatory/Adam Makarenko

Since the discovery of sGRB afterglows in 2005 by NASA’s Neil Gehrels Swift Observatory, astronomers have spent the last 17 years trying to find out which galaxies these powerful bursts originated from, as the stars within a galaxy can give insight into the environmental conditions needed to produce these events and can connect them to their neutron star merger origins. Indeed, only one sGRB, GRB 170817A, has a confirmed neutron star merger origin, as it was detected just seconds after gravitational wave detectors observed the binary neutron star merger, GW170817.

“In a decade, the next generation of gravitational wave observatories will be able to detect neutron star mergers out to the same distances as we do sGRBs today. Thus, our catalog will serve as a benchmark for comparison to future detections of neutron star mergers,” said Wen-fai Fong, assistant professor of astronomy and physics at Northwestern University and lead author of one of the publications.

“Building this catalog and finally having enough host galaxies to see patterns and draw significant conclusions is exactly what the field needed to push our understanding of these fantastic events and what happens to stars after they die,” said Nugent.

Learning about sGRB host galaxies is crucial to understanding the blasts themselves and offers clues about the types of stars that created them as well as their distance from Earth. Since neutron star mergers create heavy elements like gold and platinum, the data will also deepen scientists’ understanding of when precious metals were first created in the universe.

The first paper in the study, which is published in The Astrophysical Journal, found that sGRBs occur at higher redshifts, or earlier times in the universe, than previously thought—and with greater distances from their hosts’ centers than understood before. Surprisingly, several of these explosions were found just outside their host galaxies as if they were “kicked out,” raising questions as to how they were able to travel that far.

Published in the same journal, the second research paper in the study probed the characteristics of 69 of the identified sGRB host galaxies. The findings suggest about 85 percent of them are young, actively star-forming galaxies — a stark contrast to earlier studies that characterized the population of sGRB host galaxies as relatively old and approaching death. This means neutron star systems may form in a broad range of environments and many of them have quick formation-to-merger timescales.

Keck Observatory’s Low Resolution Imaging Spectrometer (LRIS), DEep Imaging and Multi-Object Spectrograph (DEIMOS), and Multi-Object Spectrograph for Infrared Exploration (MOSFIRE) were crucial instruments in creating the catalog. Together, they allowed the team to capture deep imaging and spectroscopy of some of the faintest galaxies identified in the survey of sGRB hosts.

“It would simply not be possible to obtain distances to some of these galaxies, or even detect them at all, without the Keck Observatory,” Fong said. “In many cases, Keck enabled the first detection of a very faint host galaxy and ensured we did not misidentify any host galaxies.”

Many questions remain about how neutron stars merge and how long the process takes. But observing sGRBs and their host galaxies provides one of the best perspectives to answer them and can offer more data about neutron star mergers and their hosts at much farther distances, and more frequently, than current gravitational wave detectors. This new sGRB host catalog will therefore serve as a vital reference point in the coming decade to understand the full evolution of these systems over cosmic time.

“The catalog can really make impacts beyond just a single class of transients like sGRBs,” said co-author Yuxin “Vic” Dong, an astronomy PhD student at Northwestern University. “With the wealth of data and results presented in the catalog, I believe a variety of research projects will make use of it, maybe even in ways we have yet not thought of.”

“I started observations for this project 10 years ago and it was so gratifying to be able to pass the torch onto the next generation of researchers,” said Fong. “It is one of my career’s greatest joys to see years of work come to life in this catalog, thanks to the young researchers who really took this study to the next level.”

The James Webb Space Telescope (JWST) is poised to further advance our understanding of neutron star mergers and how far back in time they began, as it will be able to detect the faintest host galaxies that exist at very early times in the universe.

“I’m most excited about the possibility of using JWST to probe deeper into the source of these rare, explosive events,” said Nugent. “JWST’s ability to observe faint galaxies in the universe could uncover more sGRB host galaxies that are currently evading detection, perhaps even revealing a missing population and a link to the early universe!”