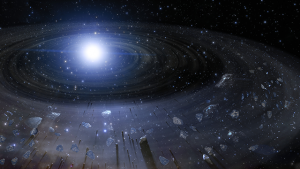 rocky debris, the pieces of a former rocky planet that has broken up, spiral inward toward a white dwarf in this illustration. studying the atmospheres of white dwarfs that have been “polluted” by such debris, a noirlab astronomer and a geologist have identified exotic rock types that do not exist in our solar system. the results suggest that nearby rocky exoplanets must be even stranger and more diverse than previously thought.
Credit: NOIRLab/NSF/AURA/J. da Silva

Maunakea, Hawaiʻi – Astronomers have discovered thousands of planets orbiting stars in our galaxy – known as exoplanets. However, it’s difficult to know what exactly these planets are made of, or whether any resemble Earth. To try to find out, astronomer Siyi Xu of NSF’s NOIRLab partnered with geologist Keith Putirka of California State University, Fresno, to study the atmospheres of what are known as polluted white dwarfs.

These are the dense, collapsed cores of once-normal stars like the Sun that contain foreign material from planets, asteroids, or other rocky bodies that once orbited the star but eventually fell into the white dwarf and “contaminated” its atmosphere. By looking for elements that wouldn’t naturally exist in a white dwarf’s atmosphere (anything other than hydrogen and helium), scientists can figure out what the rocky planetary objects that fell into the star were made of.

Putirka and Xu looked at 23 polluted white dwarfs, all within about 650 light-years of the Sun, where calcium, silicon, magnesium, and iron had been measured with precision using W. M. Keck Observatory’s High-Resolution Echelle Spectrometer (HIRES) on Maunakea in Hawai‘i, the Hubble Space Telescope, and other observatories. The scientists then used the measured abundances of those elements to reconstruct the minerals and rocks that would form from them.

Putirka and Xu’s results are published in today’s issue of Nature Communications.

They found that these white dwarfs have a much wider range of compositions than any of the inner planets in our solar system, suggesting their planets had a wider variety of rock types. In fact, some of the compositions are so unusual that Putirka and Xu had to create new names (such as “quartz pyroxenites” and “periclase dunites”) to classify the novel rock types that must have existed on those planets.

“While some exoplanets that once orbited polluted white dwarfs appear similar to Earth, most have rock types that are exotic to our solar system,” said Xu. “They have no direct counterparts in the solar system.”

Putirka describes what these new rock types might mean for the rocky worlds they belong to.

“Some of the rock types that we see from the white dwarf data would dissolve more water than rocks on Earth and might impact how oceans are developed,” he explained. “Some rock types might melt at much lower temperatures and produce thicker crust than Earth rocks, and some rock types might be weaker, which might facilitate the development of plate tectonics.”

Earlier studies of polluted white dwarfs had found elements from rocky bodies, including calcium, aluminum, and lithium. However, Putirka and Xu explain that those are minor elements (which typically make up a small part of an Earth rock) and measurements of major elements (which make up a large part of an Earth rock), especially silicon, are needed to truly know what kind of rock types would have existed on those planets.

In addition, Putirka and Xu state that the high levels of magnesium and low levels of silicon measured in the white dwarfs’ atmospheres suggest that the rocky debris detected likely came from the interiors of the planets – from the mantle, not their crust.

Some previous studies of polluted white dwarfs reported signs that continental crust existed on the rocky planets that once orbited those stars, but Putirka and Xu found no evidence of crustal rocks. However, the observations do not completely rule out that the planets had continental crust or other crust types.

“We believe that if crustal rock exists, we are unable to see it, probably because it occurs in too small a fraction compared to the mass of other planetary components, like the core and mantle, to be measured,” Putirka stated.

According to Xu, the pairing of an astronomer and a geologist was the key to unlocking the secrets hidden in the atmospheres of the polluted white dwarfs.

“I met Keith Putirka at a conference and was excited that he could help me understand the systems that I was observing. He taught me geology and I taught him astronomy, and we figured out how to make sense of these mysterious exoplanetary systems.”