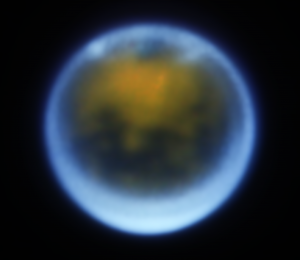 titan, as seen by the keck ii telescope on maunakea, hawai'i, is the only moon in the solar system with a dense atmosphere and the only world besides earth that has standing bodies of liquid rivers, lakes, and seas.
Credit: W. M. Keck Observatory/Judy Schmidt

Maunakea, Hawaiʻi – From space with NASA’s James Webb Space Telescope (JWST) and on the ground with the W. M. Keck Observatory on Maunakea, Hawaiʻi Island, astronomers have tag-teamed to capture a set of extraordinary images revealing large clouds in the northern hemisphere of Saturn’s largest moon, Titan.

“Detecting clouds is exciting because it validates long-held predictions from computer models about Titan’s climate, that clouds would form readily in the mid-northern hemisphere during its late summertime when the surface is warmed by the Sun,” said Conor Nixon, Principal Investigator of the Guaranteed Time Observation (GTO) program 1251 team at NASA’s Goddard Space Flight Center.

As part of their investigation of Titan’s atmosphere and climate, Nixon’s team used JWST’s Near-Infrared Camera (NIRCam) to observe the moon during the first week of November. After seeing the clouds near Kraken Mare, the largest known liquid sea of methane on the surface of Titan, they immediately contacted the Keck Titan Observing Team to request follow-up observations.

“We were concerned that the clouds would be gone when we looked at Titan a day later with Keck, but to our delight there were clouds at the same positions on subsequent observing nights, looking like they had changed in shape,” said Imke de Pater, emeritus professor of astronomy at the University of California, Berkeley, who leads the Keck Titan Observing Team.

Using Keck Observatory’s second generation Near-Infrared Camera (NIRC2) in combination with the Keck II Telescope’s adaptive optics system, de Pater and her team observed one of Titan’s clouds rotating into and another cloud either dissipating or moving out of Earth’s field of view due to Titan’s rotation. Tracking the clouds’ motions are important because they give insight into how air is flowing within Titan’s atmosphere. 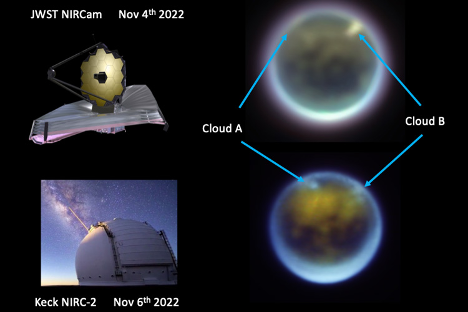 Evolution of clouds on Titan over 30 hours between Nov. 4 and Nov. 6 captured by JWST (top) and Keck Observatory (bottom). Titan’s trailing hemisphere seen here is rotating from left (dawn) to right (evening) as seen from Earth and the Sun. Cloud A appears to be rotating into view while Cloud B appears to be either dissipating or moving behind Titan’s limb. Clouds are not long-lasting on Titan or Earth, so those seen on November 4 may not be the same as those seen on November 6. Credit: NASA/STScI/Keck Observatory/Judy Schmidt

As the only moon in the solar system with a dense atmosphere, as well as the only place besides Earth to have present-day liquid rivers, lakes, and oceans, astronomers hope to deepen their understanding of Titan’s spectacular environment.