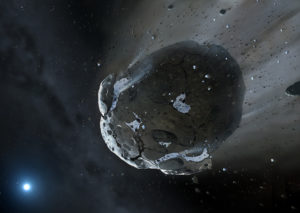 copyright mark a. garlick, space-art.co.uk, university of warwick and university of cambridge.
Artist impression of a rocky and water-rich asteroid being torn apart by the strong gravity of the white dwarf star GD 61. Similar objects in the Solar System likely delivered the bulk of water on Earth and represent the building blocks of the terrestrial planets.

Kamuela, HI — Astronomers have found the shattered remains of an asteroid that contained huge amounts of water orbiting an exhausted star, or white dwarf. This suggests that the star GD 61 and its planetary system – located about 150 light years away and at the end of its life – had the potential to contain Earth-like exoplanets.

This is the first time both water and a rocky surface – two key ingredients for habitable planets – have been found together beyond our solar system.

Earth is essentially a ‘‘dry’’ planet, with only 0.02% of its mass as surface water, meaning oceans came long after it had formed; most likely when water-rich asteroids in the solar system crashed into our planet.

The asteroid analyzed is composed of 26% water mass, very similar to Ceres, the largest asteroid in the main belt of our solar system. Both are vastly more water-rich compared with Earth.

The new discovery shows the same water delivery system could have occurred in this distant, dying star’s solar system – as latest evidence points to it containing a similar type of water-rich asteroid that would have first brought water to Earth.

Astronomers at the Universities of Cambridge and Warwick say this is the first “reliable evidence” for water-rich, rocky planetary material in any extrasolar planetary system.

The scientists, led by Cambridge’s Institute of Astronomy’s Jay Farihi, describe it as a “look into our future”. Six billion years from now, alien astronomers studying the rocky remains around our burned out sun might reach the same conclusion: terrestrial planets once circled our parent star.

All rocky planets form from the accumulation of asteroids, growing until full size, so asteroids are essentially the ‘building blocks’ of planets.

“The finding of water in a large asteroid means the building blocks of habitable planets existed – and maybe still exist – in the GD 61 system, and likely also around a substantial number of similar parent stars,” Farihi said.

“These water-rich building blocks, and the terrestrial planets they build, may in fact be common – a system cannot create things as big as asteroids and avoid building planets, and GD 61 had the ingredients to deliver lots of water to their surfaces,” Farihi said. “Our results demonstrate that there was definitely potential for habitable planets in this exoplanetary system.”

The detected water most likely came from a minor planet, at least 90 km in diameter but probably much larger, that once orbited the GD 61 star before it became a white dwarf around 200 million years ago.

Previous and current astronomical observations have measured the size and density of exoplanets, but not their composition, because conventional work was only done on planets orbiting living stars.

But the only way to see what a distant planet is made of is to take it apart, say the researchers, and nature does this in a dying white dwarf system through its extreme gravitational pull – sucking in and shredding the surrounding material.

This debris was chemically analyzed using powerful spectrograph instruments installed on the Keck I and Keck II telescopes to detect a range of elemental abundances in the white dwarf’s contaminated atmosphere, including magnesium, silicon and iron, which, together with oxygen are the main components of rocks.

By calculating the number of these elements relative to oxygen, the researchers were able to predict how much oxygen should be in the atmosphere of the white dwarf – but they found significantly more oxygen than if there were only rocks.

“This oxygen excess can be carried by either water or carbon, and in this star there is virtually no carbon – indicating there must have been substantial water,” said co-author Boris Gänsicke, from the University of Warwick.

“This also rules out comets, which are rich in both water and carbon compounds, so we knew we were looking at a rocky asteroid with substantial water content – perhaps in the form of subsurface ice – like the asteroids we know in our solar system such as Ceres,” Gänsicke said.

The team used the Cosmic Origins Spectrograph onboard Hubble to obtain precise oxygen levels in the white dwarf’s debris, with chemical analysis computed by team member Detlev Koester from the University of Kiel.

The planetary bodies such as these asteroids that fall into and pollute this dying star – which, in its heyday, was three times heavier than our sun – also reveal that giant exoplanets probably still exist in this remote and withering system.

“In order for the asteroids to pass sufficiently close to the white dwarf to be shredded, then eaten, they must be perturbed from the asteroid belt – essentially pushed – by a massive object like a giant planet,” said Farihi.

“These asteroids tell us that the GD 61 system had – or still has – rocky, terrestrial planets, and the way they pollute the white dwarf tells us that giant planets probably still exist there,” he said. “This supports the idea that the star originally had a full complement of terrestrial planets, and probably gas giant planets, orbiting it – a complex system similar to our own.”

The W. M. Keck Observatory operates the largest, most scientifically productive telescopes on Earth. The two, 10-meter optical/infrared telescopes on the summit of Mauna Kea on the Island of Hawaii feature a suite of advanced instruments including imagers, multi-object spectrographs, high-resolution spectrographs, integral-field spectroscopy and a world-leading laser guide star adaptive optics system. The Observatory is a private 501(c) 3 non-profit organization and a scientific partnership of the California Institute of Technology, the University of California and NASA.