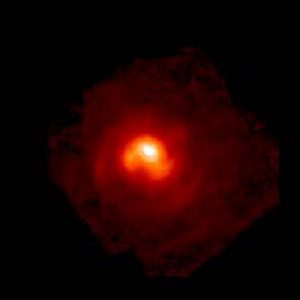 With nearly two decades of images from the world’s largest observatories – including W. M. Keck Observatory, Subaru Telescope, and Gemini Observatory in Hawaii – a research team led by Ryan Lau of Honolulu, Hawaii, an ʻIolani School alumnus and astronomer with the Japan Aerospace Exploration Agency (JAXA) at the Institute of Space and Astronautical Science (ISAS), has captured the beautiful, spiral motion of newly-formed dust streaming from a massive binary star system called Wolf-Rayet (WR) 112.

“WR 112 is incredibly hot and luminous with fast stellar winds ejecting material at high velocities – over thousands of kilometers per second,” said Lau, lead author of the study. “We’d expect dust to incinerate from the intense radiation of heat and violent winds. The fact that we see dust survive in this extreme environment is what makes WR 112 so mysterious and unusual.”

Wolf-Rayet stars are one of the most extreme stars known; they are over 20 times more massive and millions of times brighter than the Sun. Because they are in the very late stage of stellar evolution, losing a large amount of mass, Wolf-Rayet stars have short lives and therefore are extremely rare.

WR 112 is composed of a Wolf-Rayet star and a companion star that’s also much more massive than the Sun. A sequence of images taken since 2001, including observations using Keck Observatory’s Long Wavelength Spectrometer (LWS), shows this system moving over time, with the two stars orbiting around each other at timescales of about 20 years, thus causing the appearance of a spiral rotation.

“Keck Observatory’s LWS was one of the few instruments capable of capturing high-resolution thermal-infrared images and Maunakea is an exceptional site for such observations,” said Lau. “These combined capabilities allowed us to trace the decades-long evolution of the dusty nebula around WR 112.”

Sequence of 7 mid-infrared (~10 micrometers) images of WR 112 taken between 2001 – 2019 by Gemini North, Gemini South, Keck Observatory, the Very Large Telescope (VLT), and Subaru Telescope. The length of the white line on each image corresponds to about 6800 astronomical units. “Spurs” are the structures formed in the past 20 years showing variations between observations. “Nested shells” are expanding structures formed previously. The X-like signature in the Subaru Telescope image is an artifact due to property of the instrument. Credit: R. Lau et al./ISAS/JAXA

The team determined dust forms in the region where stellar winds from these two stars interact.

“When the two winds collide, all hell breaks loose, including the release of copious shocked-gas X-rays, but also the (at first blush surprising) creation of copious amounts of carbon-based aerosol dust particles in those binaries where one of the stars has evolved to helium-burning, which produces 40% of carbon in their winds,” said co-author Anthony Moffat, emeritus professor of astronomy at the University of Montreal.

This binary dust formation phenomenon has been revealed in other systems such as WR 104 by co-author Peter Tuthill, professor of physics at the University of Sydney. WR 104, in particular, reveals an elegant trail of dust resembling a ‘pinwheel’ that traces the orbital motion of the central binary star system.

However, the dusty nebula around WR 112 is far more complex than a simple pinwheel pattern. Decades of multi-wavelength observations presented conflicting interpretations of its dusty outflow and orbital motion. After almost 20 years uncertainty on WR 112, images from Subaru Telescope’s COMICS instrument taken in Oct 2019 provided the final—and unexpected—piece to the puzzle.

“We published a study in 2017 on WR 112 suggesting the dusty nebula was not moving at all, so I thought our COMICS observation would confirm this,” said Lau. “To my surprise, the COMICS image revealed the dusty shell had definitely moved since the last image we took with the Very Large Telescope in 2016. It confused me so much that I couldn’t sleep after the observing run—I kept flipping through the images until it finally registered in my head that the spiral looked like it was tumbling towards us.”

Lau collaborated with researchers at the University of Sydney, including Tuthill and undergraduate student Yinuo Han, who are experts at modeling and interpreting the motion of the dusty spirals from binary systems like WR 112.

“I shared the images of WR 112 with Peter and Yinuo and they were able to produce an amazing preliminary model that confirmed the dusty spiral stream is in fact revolving in our direction along our line of sight,” said Lau.

With the revised picture of WR 112, the research team was able to deduce how much dust this binary system is forming. To their surprise, the team found WR 112’s dust output rate of 3×10-6 solar mass per year was unusual given its 20-year orbital period—the most efficient dust producers in this type of WR binary star system tend to have shorter orbital periods of less than a year, like WR 104 with its 220-day period.

WR 112 therefore demonstrates the diversity of WR binary systems capable of being highly-efficient dust factories and highlights their potential role as significant sources of dust not only in the Milky Way, but galaxies beyond our own.

Massive binary star systems like WR 112, as well as supernova explosions, are regarded as sources of dust in the early universe, but the process of dust production and the amount of the ejected dust are still open questions. With the discovery of WR 112, astronomers now have new insight into the origin of dust in the young universe.

Above: animated model of the spiral dust nebula around WR 112 (left) and the actual corresponding observations (right).  The φ symbol on the model animation indicates the orbital phase of the central binary, where φ = 0 is at the beginning of its 20-yr orbit, and φ = 1 is at the end of its orbit. The animation pauses at each phase that is displayed in the real observations. Credit: R. Lau et al./ISAS/JAXA