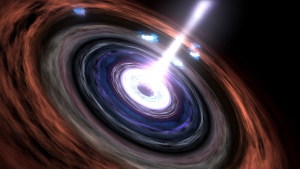 Maunakea, Hawaii – Astronomers are using a powerful new probe at W. M. Keck Observatory to investigate what’s causing galaxies to stop forming new stars. It’s one of the biggest mysteries in astronomy today and Dr. Alison Coil of University of California, San Diego is among the astronomers who are on a mission to find out.

In the heart of a galaxy with an Active Galactic Nucleus (AGN), matter falling toward a supermassive black hole creates jets of particles traveling near the speed of light. CREDIT: NASA/GODDARD SPACE FLIGHT CENTER CONCEPTUAL IMAGE LAB

“KCWI is absolutely critical!” she says.

“It opens up a brand-new parameter space that was not possible to explore before,” says Dr. Luca Rizzi, KCWI instrument master and support astronomer at Keck Observatory. “It is twice as sensitive as the best spectrograph we’ve had before. Plus, it performs this type of observation called integral field spectroscopy. Traditionally, there were two ways for astronomers to study celestial objects, either through imaging or through spectroscopy. This instrument breaks the barrier between the two. It’s almost as if you have an image, but each pixel is not just a pixel, it contains an entire spectrum. Automatically there is no more distinction between an image and its spectrum.”

KCWI’s high-tech capabilities, along with its location – on one of the largest telescopes in the world atop Maunakea where skies are exceptionally dark and clear – makes for a powerful combo, especially when used by a community of innovative, cutting-edge scientists like Coil.

Coil is using KCWI to gather observational evidence necessary to support the theory that supermassive black holes cause a chain reaction in their host galaxy that ceases new star formation. This theory has currently only been proposed through computer modeling and remains to be proven with observational data.

Supermassive black holes are thought to reside at the center of almost every large galaxy, including our own. They contain up to a billion times more mass than a typical stellar mass black hole, but astronomers do not know how they form. They do not emit or reflect light, so they are not directly observable, but they greatly affect their surroundings by creating active galactic nuclei (AGN).

AGN are the areas of activity at the center of a galaxy surrounding, and including, a supermassive black hole. In this region, nearby gas, dust, and stars form an accretion disk of swirling matter, which orbits the black hole at very high velocities. The disk lights up and becomes a source of bright emission due to the friction, collisions, and heat of the accreting material.

According to the laws of physics, in order for some material to be accreted onto the black hole at small distances, other material has to be ejected to very large distances. This, combined with friction in the accretion disk, causes an energy release that forms in two ways: 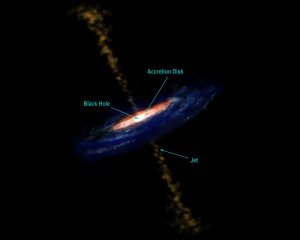 AGN-driven outflows and jets could theoretically quench star formation in a galaxy by heating up and/or pushing out the cold gas that stars need to form. So, the presence of a supermassive black hole at the center of a galaxy could potentially start a chain of cosmic events that essentially kills the formation of new stars in the galaxy. This could be the missing link.

In older galaxies, astronomers can see that star formation has stopped, but they aren’t sure how or why.

“Ideally you would need to live for millions of years to watch what happens to a single galaxy over time. We only get a snapshot of what’s going on with a galaxy at any given time,” explains Coil. “According to theorists and their models, AGN are incredibly crucial in the lives of galaxies, but we haven’t observationally shown that that’s true. When we look at these galaxies, we can see this outflowing gas. We see gas being ejected at high velocities, which is great. But the thing that’s been illusive is trying to show this is what is turning off star formation.”

Coil and her colleagues used the Multi-Object Spectrometer for Infra-Red Exploration (MOSFIRE) at Keck Observatory a few years ago to survey 1500 distant galaxies, called the MOSFIRE Deep Evolution Field (MOSDEF) survey. To gather evidence for this theory, Coil and her team, including graduate student Gene Leung, looked at data from 67 of these galaxies that harbor AGN. Their findings are published in The Astrophysical Journal.

“We showed that AGN-driven outflows are common in distant galaxies, and that they can extend to the same spatial scale as the whole galaxy. That implies that they could impact the whole galaxy, and these are key things to see in order to help inform theoretical models.”

Just how much do the outflows impact their host galaxy? To find out, the team needs additional information on the physical conditions of the gas.

“What we’d like to know better is how much energy and mass the outflows have. For that, you need to know exactly how far out they extend, and since the outflows are fainter as you go farther away from the center, you need an instrument that is sensitive to faint emission,” says Coil.

KCWI will help solve this dilemma; the instrument allows astronomers to map out faint emission in 3-D. Coil’s goal is to use KCWI to derive the compositions and velocities of AGN-driven outflows, and build a 3-D outflow map.

During a one-night pilot observation in June, Coil and collaborator Dr. David Rupke of Rhodes College used KCWI to follow up on findings from the MOSDEF survey.

“We looked at a single nearby galaxy to try and map out the AGN-driven outflow to a greater extent than has ever been seen before. This will give us a better handle on how far the gas expands, its morphology, and physical properties of the gas. KCWI was built to trace out the cosmic web, or gas in between galaxies. We are able to see different things with KCWI that we can’t see with anything else,” Coil explains.

KCWI is paramount to acquiring the data necessary to better understand these AGN-driven outflows and eventually prove, or disprove, what theorists are saying needs to happen to stop star formation in a galaxy.

“Over the last few years, it has become increasingly important to understand AGN,” says Rizzi. “The reason is we have become aware that these jets and outflows play a role in the evolution of galaxies. If the jets and outflows were not there, our simulations would not be able to predict what we see through observation, so we know they play a role. With Coil’s observations, we will have a much better understanding of the relation of these powerful objects to their galaxies.”

Coil and her team are now reducing and analyzing the data they obtained during their June observing run at Keck Observatory. Their findings will shape their observing plans for this Fall when the team returns to Keck Observatory after being awarded additional KCWI time to observe many more galaxies with known AGN-driven outflows.

Coil is also working on another analysis of the MOSDEF survey, this time with a sample size of roughly 200 galaxies with AGN. By having a larger sample of distant sources and studying nearby ones in detail using KCWI, they are analyzing the problem from many different angles, which will provide astronomers with a more concrete theory of galaxy evolution.

As far as we know, galaxies do not form stars forever, but Coil’s research could tell us why. Supermassive black holes could be the answer.

The W. M. Keck Observatory telescopes are among the most scientifically productive on Earth. The two, 10-meter optical/infrared telescopes atop Maunakea on the Island of Hawaii feature a suite of advanced instruments including imagers, multi-object spectrographs, high-resolution spectrographs, integral-field spectrometers, and world-leading laser guide star adaptive optics systems. Keck Observatory is a private 501(c) 3 non-profit organization operated as a scientific partnership among the California Institute of Technology, the University of California, and the National Aeronautics and Space Administration. The Observatory was made possible by the generous financial support of the W. M. Keck Foundation. The authors recognize and acknowledge the very significant cultural role and reverence that the summit of Maunakea has always had within the Native Hawaiian community.  We are most fortunate to have the opportunity to conduct observations from this mountain.