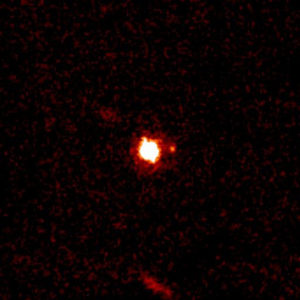 w. m. keck observatory
Keck II Telescope image of Dwarf Planet Eris and its satellite Dysnomia, the most distant objects ever detected in the solar system at the time of their discovery. Dysnomia (right) was discovered using the W. M. Keck Observatory on September 10, 2005 (UT).

Baltimore (June 14th, 2007) W. M. Keck Observatory and NASA’s Hubble Space Telescope have teamed up to precisely measure the mass of Eris, the largest member of a new class of dwarf planets in our solar system. Eris has 27 percent more mass than Pluto, formerly the largest member of the Kuiper Belt of icy objects beyond Neptune.

Hubble observations in 2006 showed that Eris is slightly physically larger than Pluto. But the mass could only be calculated by observing the orbital motion of the moon Dysnomia around Eris. Multiple images of Dysnomia’s movement along its orbit were taken by Hubble and Keck.

Astronomer Mike Brown of the California Institute of Technology in Pasadena, Calif. and colleagues also report in this week’s Science Magazine that Dysnomia is in a nearly circular 16-day orbit. This favors the idea that Dysnomia was born out of a collision between Eris and another Kuiper Belt object (KBO). A gravitationally captured object would be expected to be in a more elliptical orbit.

The satellites of Pluto, as well as the Earth-Moon system are also believed to have been born out of a collision process where debris from the smashup goes into orbit and coalesces into a satellite.

By comparing the mass and diameter, Brown has calculated a density for Eris of 2.3 grams per cubic centimeter. This is very similar to the density of Pluto, the large Kuiper Belt object 2003 EL61, and Neptune’s moon Triton which is likely a captured KBO. These higher densities imply that these bodies are not pure ice but must have a significant rocky composition.

The discovery of Eris in 2005 (originally nicknamed Xena, and officially cataloged 2003 UB313) prompted a debate over the planetary status of Pluto because astronomers realized they would have to call it the “10th” planet if Pluto retained its own planetary status, which was already under debate. This led the International Astronomical Union, in 2006, to make a new class of solar system object called dwarf planets. These are spherical bodies in hydrostatic equilibrium (objects that have sufficient gravity to overcome their own rigidity and form a spherical shape) like the planets, but unlike the major planets in the solar system, they have not gravitationally cleared out the neighborhood of particles and small debris along their orbits.