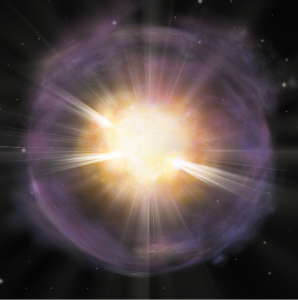 Maunakea, Hawaii – Most of the calcium in the universe, including the very calcium in our teeth and bones, was created in the last gasp of dying stars.

Called “calcium-rich supernovae,” these stellar explosions are so rare that astrophysicists have struggled to find and subsequently study them. The nature of these supernovae and their mechanism for creating calcium, therefore, have remained elusive.

Now a Northwestern University-led team has potentially uncovered the true nature of these rare, mysterious events. For the first time ever, the researchers examined a calcium-rich supernova, dubbed SN 2019ehk, with X-ray imaging, providing an unprecedented glimpse into the star during the last month of its life and ultimate explosion.

The study, which includes data from W. M. Keck Observatory on Maunakea in Hawaii, is published in the August 5, 2020 issue of The Astrophysical Journal.

The new findings revealed that a calcium-rich supernova is a compact star that sheds an outer layer of gas during the final stages of its life. When the star explodes, its matter collides with the loose material in that outer shell, emitting bright X-rays. The overall explosion causes intensely hot temperatures and high pressure, driving a nuclear reaction that produces calcium.

“These events are so few in number that we have never known what produced calcium-rich supernova,” said lead author Wynn Jacobson-Galan, an NSF Graduate Research Fellow at Northwestern University. “By observing what this star did in its final month before it reached its critical, tumultuous end, we peered into a place previously unexplored, opening new avenues of study within transient science.”

“Before this event, we had indirect information about what calcium-rich supernovae might or might not be,” said senior author Raffaella Margutti, an assistant professor of physics and astronomy at Northwestern University and a member of CIERA (Center for Interdisciplinary Exploration and Research in Astrophysics). “Now, we can confidently rule out several possibilities.”

‘THE RICHEST OF THE RICH’

“The explosion is trying to cool down,” Margutti explained. “It wants to give away its energy, and calcium emission is an efficient way to do that.”

“The beautiful Keck spectrum revealed it wasn’t just calcium-rich,” Margutti said. “It was the richest of the rich.” 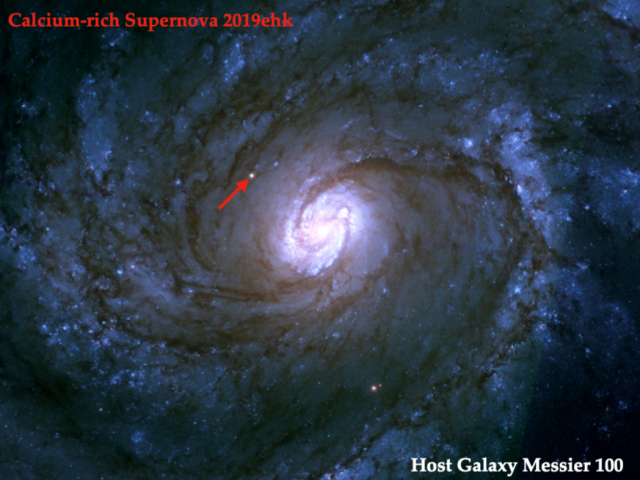 ‘A GLOBAL COLLABORATION WAS IGNITED’

In April 2019, amateur astronomer Joel Shepherd acquired the very first image of SN 2019ehk, while Jaroslaw Grzegorzek was the first to report to the Transient Name Server news of a new supernova in Messier 100 (M100), a spiral galaxy located 55 million light years from Earth.

“As soon as the world knew that there was a potential supernova in M100, a global collaboration was ignited,” Jacobson-Galan said. “Every single country with a prominent telescope turned to look at this object.”

The worldwide follow-up operation moved so quickly, the supernova was observed just 10 hours after exploding. Leading observatories such as NASA’s Swift Satellite, Lick Observatory, and Keck Observatory were among the telescopes triggered to examine SN 2019ehk in optical wavelengths.

University of California Santa Barbara graduate student Daichi Hiramatsu was the first to trigger Swift to study SN 2019ehk in the X-ray and ultraviolet. The X-ray emission detected with Swift only lingered for five days before completely disappearing.

“In the world of transients, we have to discover things very, very fast before they fade,” Margutti said. “Initially, no one was looking for X-rays. Daichi noticed something and alerted us to the strange appearance of what looked like X-rays. We looked at the images and realized something was there. It was much more luminous than anybody would have ever thought. There were no preexisting theories that predicted calcium-rich transients would be so luminous in X-ray wavelengths.”

SN 2019ehk’s brief luminosity told another a story about its nature. The Northwestern researchers believe the star shed an outer layer of gas in its final days. When the star exploded, its material collided with this outer layer to produce a bright, energetic burst of X-rays.

“The luminosity tells us how much material the star shed and how close that material was to the star,” Jacobson-Galan said. “In this case, the star lost a very small amount of material right before it exploded. That material was still nearby.”

Although the Hubble Space Telescope had been observing M100 for the past 25 years, the powerful device never registered the star — which was experiencing its final evolution — responsible for SN 2019ehk. The researchers used the Hubble images to examine the supernova site before the explosion occurred and say this is yet another clue to the star’s true nature.

“It was likely a white dwarf or very low-mass massive star,” Jacobson-Galan said. “Both of those would be very faint.”

“Without this explosion, you wouldn’t know that anything was ever there,” Margutti added. “Not even Hubble could see it.”