DIVINING THE SOURCE OF THE WATER-FOUNTAIN NEBULA 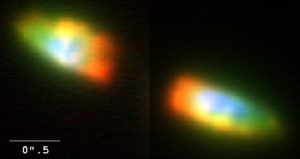 w. m. keck observatory
This high-resolution, false-color image of the dying star IRAS16342-3814 is a combination of three images, one taken with the HST (shown in blue) at visible wavelength (0.6 µm) and two taken with Keck AO in the near-infrared at 2.1 µm (shown in green) and 3.8 µm (shown in red). The image shows two lobes, which are cavities in an extended cloud of gas and dust, illuminated by light from a central star which lies between the two lobes, but is hidden from our view behind a dense, dust lane that separates the two lobes. In the HST image seen in blue light here, only diffuse light form the two lobe center is seen and little detail is revealed for studying the nebula structure.

Sun-like stars shine sedately for billions of years, but die in spectacular fashion, creating intricate and beautiful gaseous shrouds around them in the relatively short period of about a thousand years or less. These shrouds, called planetary nebulae, come in a wide variety of beautiful non-spherical shapes, in striking contrast to the round shapes of their progenitor stars. The answer to the question of how planetary nebulae acquire their diverse shapes has long eluded astronomers.

The images of the Water-Fountain Nebula (which lies at an estimated distance of 6500 light years in the direction of Scorpius) shown here, were acquired using the adaptive optics (AO) technique, at two near-infrared wavelengths (using filters centered at wavelengths of 2.1 and 3.8 microns). The AO technique removes the blurring effect of Earth’s atmosphere and allows astronomers to take full advantage of large ground-based telescopes like the W. M. Keck Telescope, revealing important details which were hidden even to the sharp eyes of the Hubble Space Telescope (HST). The images show two lobes, which are cavities (each of size about 2000 Astronomical Units) in an extended cloud of gas and dust, illuminated by light from a central star which lies between the two lobes, but is hidden from our view behind a dense, dust lane that separates the two lobes. These near-infrared AO images probe much deeper than HST into the two lobes of the Water-Fountain Nebula, showing a remarkable corkscrew-shaped structure (marked by dashed lines) apparently etched into the lobe walls.

According to JPL Research Scientist Dr. Sahai, ” The corkscrew structure seen here is the proverbial writing on the wall signature of an underlying high-speed jet of matter which has changed its direction in a regular fashion (called precession). These images of the Water-Fountain Nebula thus show direct evidence for a jet actively carving out a bipolar nebula, providing unambiguous support for our recently proposed hypothesis that the shaping of most planetary nebulae is carried out by such jets”.

The discovery of the corskcrew pattern resulting from a precessing jet in the Water-Fountain Nebula is an exciting addition to our knowledge of jets in dying stars as well as astrophysical jets in general. The jets in dying stars are thought to operate for a very short period of time (few hundred years). Finding direct evidence for these jet-like outflows has been generally very difficult, because they are compact, not always active, and it is difficult to see them against the bright nebular background. A detailed comparison of the images of the Water-Fountain Nebula taken with filters of different colors allows scientists to determine the physical properties of the nebula. New AO imaging in a few years from now will enable Dr. Sahai and collaborators to measure the physical motion of matter in the corkscrew pattern, and provide strong constraints on the nebular shaping process.

When Sun-like stars get old, they become cooler and redder, increasing their sizes and energy output tremendously: they are called red giants. Most of the carbon (the basis of life) and particulate matter (crucial building blocks of solar systems like ours) in the universe is manufactured and dispersed by red giant stars. Preplanetary nebulae are formed when the red giant star has ejected most of its outer layers. As the very hot core (six or more times hotter than the Sun) gets further exposed, the cloud of ejected material is bathed with ultraviolet light, making it glow; the object is then called a planetary nebula.