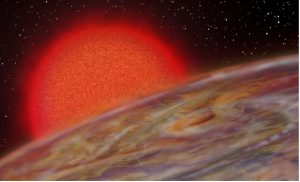 Maunakea, Hawaiʻi – Three newly-discovered planets have been orbiting dangerously close to stars nearing the end of their lives.

Out of the thousands of extrasolar planets found so far, these three gas giant planets first detected by the NASA TESS (Transiting Exoplanet Survey Satellite) Mission, have some of the shortest-period orbits around subgiant or giant stars. One of the planets, TOI-2337b, will be consumed by its host star in less than 1 million years, sooner than any other currently known planet.

“These discoveries are crucial to understanding a new frontier in exoplanet studies: how planetary systems evolve over time,” explained lead author Samuel Grunblatt, a postdoctoral fellow at the American Museum of Natural History and the Flatiron Institute in New York City. Grunblatt, who earned his PhD from the University of Hawaiʻi Institute for Astronomy (UH IfA), added that “these observations offer new windows into planets nearing the end of their lives, before their host stars swallow them up.”

Grunblatt announced the discovery and confirmation of these planets – TOI-2337b, TOI-4329b, and TOI-2669b – at an American Astronomical Society press conference today; the study has been accepted for publication in the Astronomical Journal and is available in preprint format on arXiv.org.

The researchers estimate that the planets have masses between 0.5 and 1.7 times Jupiter’s mass, and sizes that range from slightly smaller to more than 1.6 times the size of Jupiter. They also span a wide range of densities, from styrofoam-like to three times denser than water, implying a wide variety of origins.

These three planets are believed to be just the tip of the iceberg. “We expect to find tens to hundreds of these evolved transiting planet systems with TESS, providing new details on how planets interact with each other, inflate, and migrate around stars, including those like our Sun,” said Nick Saunders, a graduate student at UH IfA and co-author of the study.

The planets were first found in NASA TESS Mission full-frame image data taken in 2018 and 2019. Grunblatt and his collaborators identified the candidate planets in TESS data, and then used W. M. Keck Observatory’s High-Resolution Echelle Spectrometer (HIRES) on Maunakea, Hawaiʻi to confirm the existence of the three planets.

“The Keck observations of these planetary systems are critical to understanding their origins, helping reveal the fate of solar systems like our own,” said UH IfA Astronomer Daniel Huber, who co-authored the study. 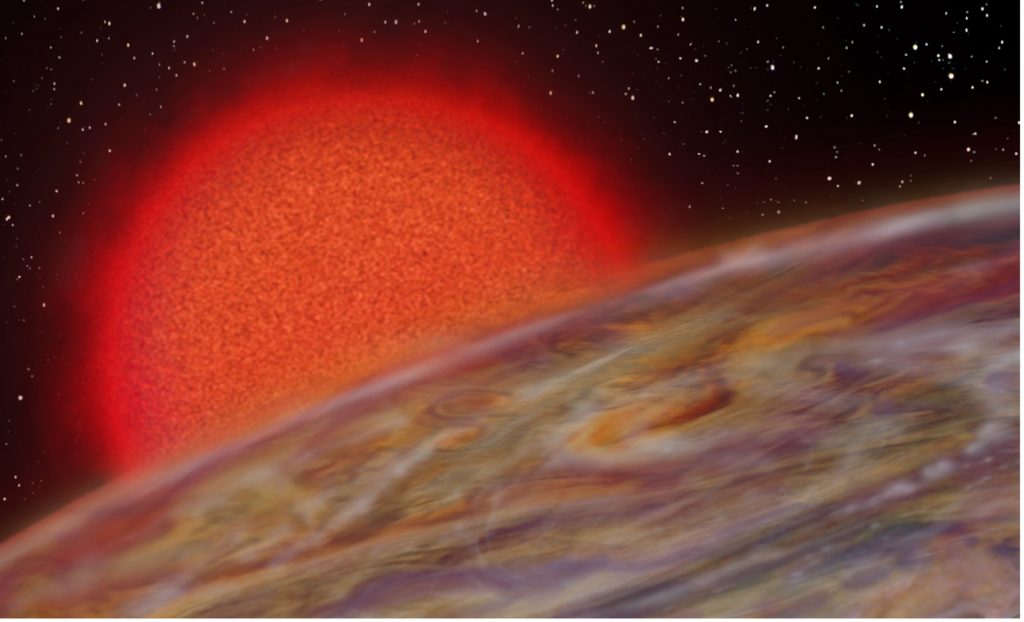 An artist’s rendition of what a planetary system similar to TOI-2337b, TOI-4329b, and TOI-2669b might look like, where a hot Jupiter-like exoplanet orbits an evolved, dying star.

Current models of planet dynamics suggest that planets should spiral in toward their host stars as the stars evolve over time, particularly in the last 10 percent of the star’s lifetime. This process also heats the planets, potentially causing their atmospheres to inflate. However, this stellar evolution will also cause the orbits of planets around the host star to come closer to one another, increasing the likelihood that some of them will collide, or even destabilize the entire planetary system.

The wide variety of planet densities found in the study suggests that these planetary systems have been shaped through chaotic planet-to-planet interactions. This could also have resulted in unpredictable heating rates and timescales for these planets, giving them the wide range in densities we observe today.

Future observations of one of these systems, TOI-4329, with the recently-launched James Webb Space Telescope could reveal evidence for water or carbon dioxide in the planet’s atmosphere. If these molecules are seen, the data would provide constraints on where these planets formed, and what sort of interactions had to occur to produce the planetary orbits we see today.

Continued monitoring of these systems with the NASA TESS telescope will constrain the rate at which these planets are spiraling into their host stars. So far, no clear signal of orbital decay has been observed in any of the systems, but a longer baseline of observations with the TESS Extended Missions will provide much tighter constraints on planet in-spiral than are currently possible, revealing how strongly planetary systems are affected by stellar evolution.

The team hopes that this ‘planetary archeology’ will help us to understand the past, present, and future of planetary systems, moving us one step closer to answering the question: “Are we alone?”