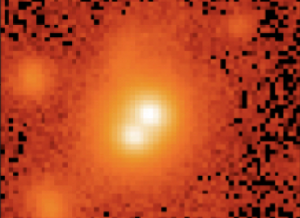 Maunakea, Hawaii – A cosmic dance between two merging galaxies, each one containing a supermassive black hole that’s rapidly feeding on so much material it creates a phenomenon known as a quasar, is a rare find.

Astronomers have discovered several pairs of such merging galaxies, or luminous “dual” quasars, using three Maunakea Observatories in Hawaii – Subaru Telescope, W. M. Keck Observatory, and Gemini Observatory. These dual quasars are so rare, a research team led by the Kavli Institute for the Physics and Mathematics of the Universe at the University of Tokyo estimates only 0.3% of all known quasars have two supermassive black holes that are on a collision course with each other.

The study published today in the August 26, 2020 issue of The Astrophysical Journal.

“In spite of their rarity, they represent an important stage in the evolution of galaxies, where the central giant is awakened, gaining mass, and potentially impacting the growth of its host galaxy,” said Shenli Tang, a graduate student at the University of Tokyo and co-author of the study.

Quasars are one of the most luminous, energetic objects known in the universe, powered by supermassive black holes that are millions to billions times more massive than our Sun. As material swirls around a black hole at the center of a galaxy, it is heated to high temperatures, releasing so much light that the quasar can outshine its host galaxy. This makes a merging pair of galaxies with quasar activity hard to detect; it is difficult to separate the light from the two quasars because they are in such close proximity to each other. Also, observing a wide enough area of the sky to catch these rare events in sufficient numbers is a challenge.

To overcome these obstacles, the team took advantage of a sensitive wide survey of the sky using the Hyper Suprime-Cam (HSC) camera on the Subaru Telescope.

“To make our job easier, we started by looking at the 34,476 known quasars from the Sloan Digital Sky Survey with HSC imaging to identify those having two (or more) distinct centers,” said lead author John Silverman of the Kavli Institute for the Physics and Mathematics of the Universe. “Honestly, we didn’t start out looking for dual quasars. We were examining images of these luminous quasars to determine which type of galaxies they preferred to reside in when we started to see cases with two optical sources in their centers where we only expected one.”

The team identified 421 promising cases. However, there was still the chance many of these were not bona-fide dual quasars but rather chance projections such as starlight from our own galaxy. Confirmation required detailed analysis of the light from the candidates to search for definitive signs of two distinct quasars.

Using Keck Observatory’s Low Resolution Imaging Spectrometer (LRIS) and Gemini Observatory’s Near-Infrared Integral Field Spectrometer, Silverman and his team identified three dual quasars, two of which were previously unknown. Each object in the pair showed the signature of gas moving at thousands of kilometers per second under the influence of a supermassive black hole. 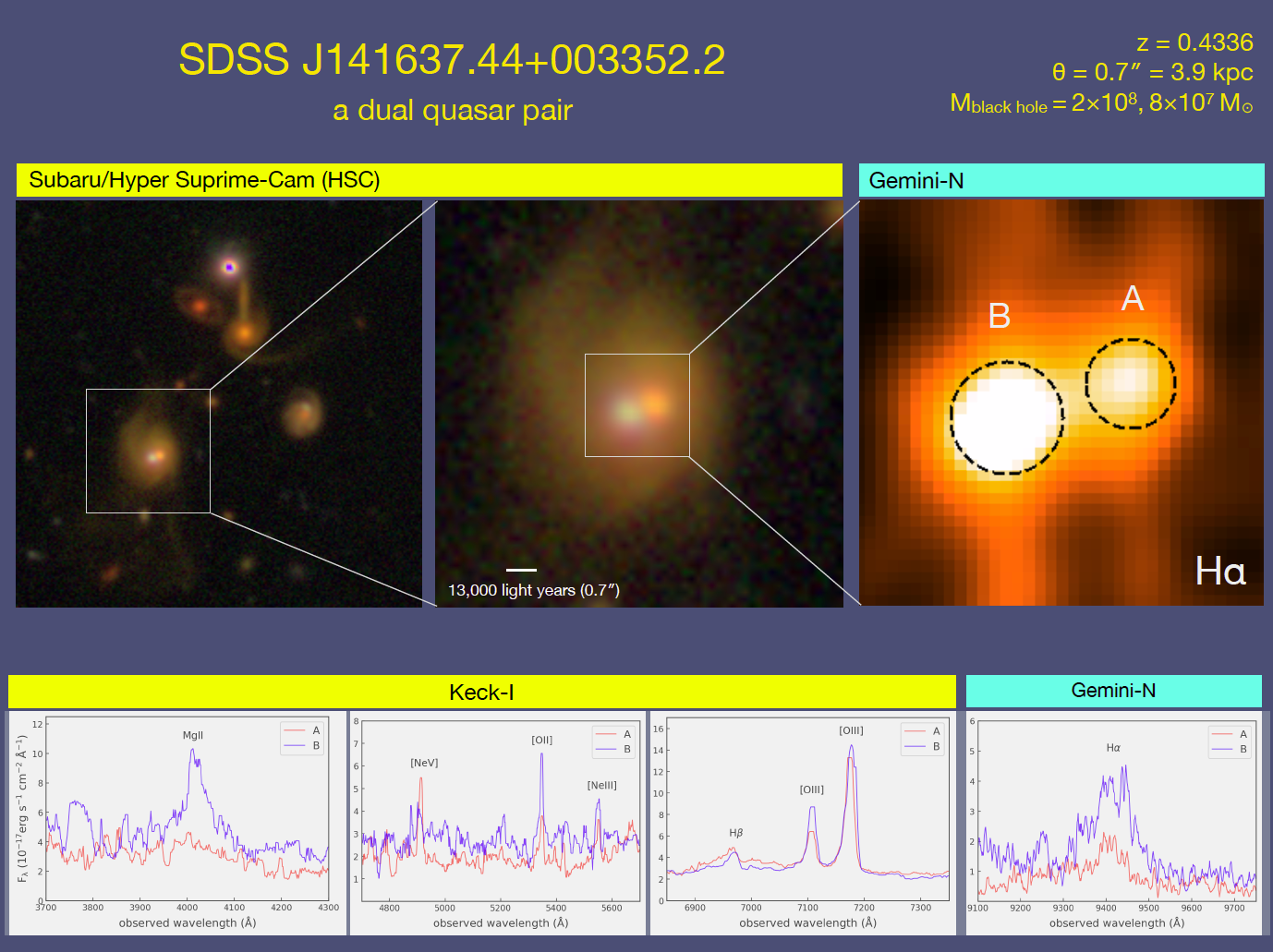 SDSS J141637.44+003352.2, a dual quasar at a distance for which the light reaching us was emitted 4.6 billion years ago. The two quasars are 13,000 light years apart on the sky, placing them near the center of a single massive galaxy that appears to be part of a group, as shown by the neighboring galaxies in the left panel. In the lower panels, optical spectroscopy has revealed broad emission lines associated with each of the two quasars, indicating that the gas is moving at thousands of kilometers per second in the vicinity of two distinct supermassive black holes. The two quasars are different colors, due to different amounts of dust in front of them. Credit: Silverman et al.

The newly-discovered dual quasars demonstrate the promise of wide-area imaging combined with high-resolution spectroscopic observations to reveal these elusive objects, which are key to better understanding the growth of galaxies and their supermassive black holes.