The Earliest Supermassive Black Hole and Quasar in the Universe 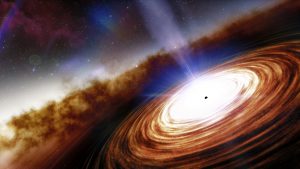 The most distant quasar known has been discovered. The quasar, seen just 670 million years after the Big Bang, is 1000 times more luminous than the Milky Way, and is powered by the earliest known supermassive black hole, which weighs in at more than 1.6 billion times the mass of the Sun. Seen more than 13 billion years ago, this fully formed distant quasar is also the earliest yet discovered, providing astronomers with insight into the formation of massive galaxies in the early universe. The result was released today at the January 2021 meeting of the American Astronomical Society (AAS).

Maunakea, Hawaii – Quasars, which are powered by the feeding frenzies of colossal supermassive black holes, are the most energetic objects in the universe. They occur when gas in the superheated accretion disk around a supermassive black hole is inexorably drawn inwards, radiating light across the electromagnetic spectrum. The amount of energy emitted by quasars is enormous, with the most massive examples easily outshining entire galaxies.

At an AAS press conference today, January 12, 2021, an international team of astronomers announced the discovery of J0313-1806, the most distant quasar known to date with a redshift of z = 7.64.

The study, which includes data from several Maunakea Observatories in Hawaiʻi – UKIRT, W. M. Keck Observatory, and the international Gemini Observatory, a Program of NSF’s NOIRLab – as well as Pan-STARRS1, a survey telescope on Maui operated by the University of Hawaiʻi Institute for Astronomy, has been accepted in The Astrophysical Journal Letters and is available in pre-print format on arXiv.org.

“The most distant quasars are crucial for understanding how the earliest black holes formed and for understanding cosmic reionization — the last major phase transition of our universe,” said Xiaohui Fan, study co-author and Regents Professor of Astronomy at the University of Arizona.

The presence of such a massive black hole so early in the universe’s history challenges theories of black hole formation.

“Black holes created by the very first massive stars could not have grown this large in only a few hundred million years,” says Feige Wang, NASA Hubble fellow at the University of Arizona and lead author of the research paper.

The observations that led to this discovery were made using a variety of observatories around the world, including several world-class telescopes in Hawaiʻi.

Data from Pan-STARRS1 and the UKIRT Hemisphere Survey helped to first identify J0313-1806. Once the team confirmed its identity as a quasar, they obtained high-quality spectra from Keck Observatory and Gemini North to measure the mass of the central supermassive black hole.

“Measurement of spectral lines that originate from gas surrounding the quasar’s accretion disk allows us to determine the black hole’s mass and study how its rapid growth influences its environment. For such distant quasars, the most important spectral lines are redshifted to near-infrared wavelengths and Keck’s NIRES spectrograph is an excellent instrument for these observations,” said co-author Aaron Barth, a professor of Physics and Astronomy at the University of California, Irvine.

“Observing infrared light requires low temperatures. The near-freezing climate prevailing at the sky-scraping summit of Maunakea (13,796 ft or 4205 m) make it one of the only sites on Earth with instruments sensitive enough to observe such red wavelengths,” said Joe Hennawi, a professor at UC Santa Barbara who helped execute the observations with the Keck/NIRES spectrograph.

In addition to weighing the monster black hole, the Keck Observatory and Gemini North observations uncovered an extremely fast outflow emanating from the quasar in the form of a high-velocity wind traveling at 20% of the speed of light. 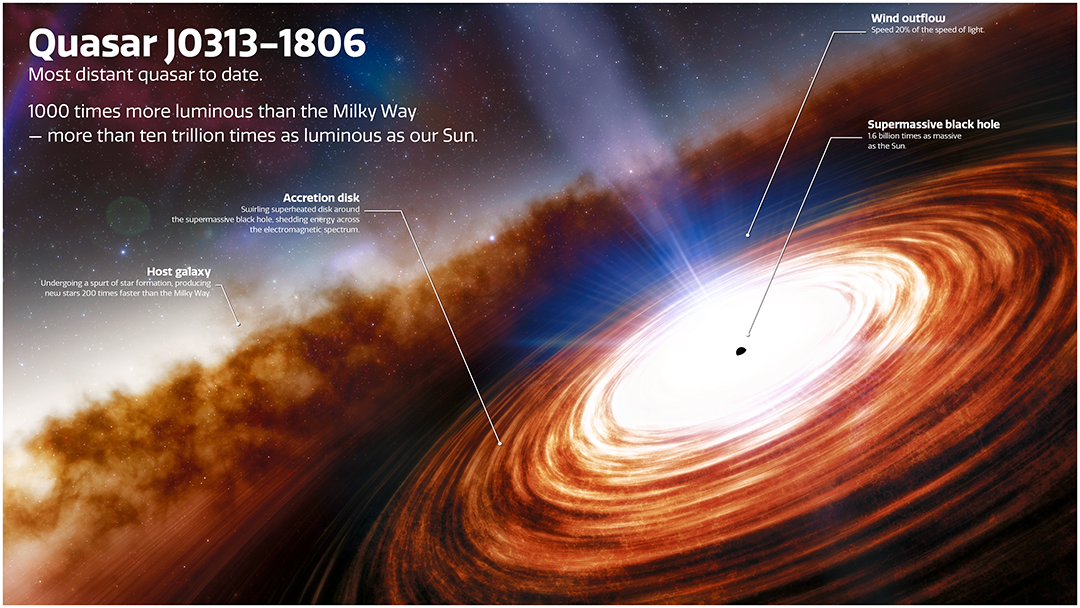 An artist’s impression of quasar J0313-1806 showing the supermassive black hole and the extremely high velocity wind. The quasar, seen just 670 million years after the Big Bang, is 1000 times more luminous than the Milky Way, and is powered by the earliest known supermassive black hole, which weighs in at more than 1.6 billion times the mass of the Sun. Credit: NOIRLab/NSF/AURA/J. da Silva

“The energy released by such an extreme high-velocity outflow is large enough to impact the star formation in the entire quasar host galaxy,” said co-author Jinyi Yang, Peter A. Strittmatter postdoctoral fellow of Steward Observatory at the University of Arizona.

This is the earliest known example of a quasar sculpting the growth of its host galaxy, making J0313-1806 a promising target for future observations.

The galaxy hosting J0313-1806’s is undergoing a spurt of star formation, producing new stars 200 times faster than the Milky Way. The combination of this intense star formation, the luminous quasar, and the high-velocity outflow make J0313-1806 and its host galaxy a promising natural laboratory for understanding the growth of supermassive black holes and their host galaxies in the early universe.

“This would be a great target to investigate the formation of the earliest supermassive black holes,” concluded Wang. “We also hope to learn more about the effect of quasar outflows on their host galaxy — as well as to learn how the most massive galaxies formed in the early universe.”