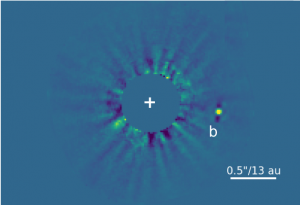 direct image of hd 33632 ab captured with scexao/charis. the companion (marked as "b") lies at a separation of about 20 au from its star (located at the white cross), similar to the separations from the sun to uranus and neptune in our solar system.
Credit: T. Currie, NAOJ/NASA-Ames

Subaru Telescope first detected and captured remarkably sharp pictures of the object. The team conducted follow-up observations at Subaru Telescope to take more direct images as well as at Keck Observatory to obtain infrared images and confirmed the object is an orbiting companion to the star HD 33632 Aa, and not an unrelated background star. Combined with complementary data from the Gaia space astrometry satellite, the researchers also found the brown dwarf has a mass of about 46 Jupiters.

Named HD 33632 Ab, the brown dwarf is one of only a few known objects of its kind orbiting a near-twin of the Sun at near-twin scales of our Solar System (Mercury to Pluto).

The study recently published in the November 30, 2020 issue of The Astrophysical Journal Letters.

Brown dwarfs are a class of objects that are smaller than stars but more massive than giant planets like Jupiter. They’re dubbed ‘failed stars’ because they’re not massive enough to ignite nuclear fusion in their cores and shine like true stars.

“Thanks to SCExAO/CHARIS’s incredibly sharp images, we can not only see HD 33632 Ab but get ultra-precise measurements for its position and its spectrum, which gives important clues about its atmospheric properties and its dynamics,” said Thayne Currie, an affiliated researcher at Subaru Telescope and lead author of this study.

HD 33632 Ab provides critical new insight into the atmospheres of the planets in HR 8799 – the very first extrasolar system to have its picture taken – since its temperature is likely very similar, though it is older, has a higher mass, and has higher gravity.

“Keck Observatory’s NIRC2 thermal infrared data allowed us to better understand how HD 33632 Ab’s atmosphere compares to those of the first directly imaged exoplanets, HR 8799 bcde, which were discovered in part by Keck,” said Currie.

By studying HD 33632 Ab and the HR 8799 exoplanets, astronomers hope to learn more about how atmospheric conditions of planets and brown dwarfs are tied to the diversity of their age and compositions, such as mass, temperatures, and chemical properties.