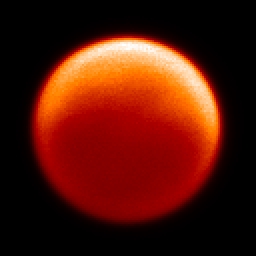 w. m. keck observatory
Near-infrared images of Titan's upper atmosphere from the W.M. Keck Observatory were used to search for the meteor trail expected from the Huygens probe. No atmospheric disturbance was detected.

“Although no disturbances in Titan’s atmosphere were detected, the observations provide the best images that characterize the satellite at the moment of probe entry”, says Antonin Bouchez, a staff member at the Keck observatory, who was leading the observing effort.

“It was worth getting up in the middle of the night for this historic moment”, says Fred Chaffee, director of the Keck Observatory, “despite the bad weather on the mountain”. Winds were blowing at 40-50 mph, while the mountain top itself was still cloaked with snow and ice from a recent storm. Other team members that particpated in the observations were David LeMignant from the Keck Observatory, Imke de Pater, a professor at the University of California at Berkeley, and Michael Brown, a professor at Caltech.

Titan is of particular interest to scientists because it is the only moon in our solar system with a dense, methane-rich, nitrogen atmosphere, reminiscent of our own atmosphere here on Earth. The moon is cloaked in a thick, smog-like haze produced by the breakup of methane by sunlight. Further study of this moon could provide clues to planetary formation and evolution and, perhaps, about the early days of Earth as well.

To get a closer look at Titan, scientists from three different international space agencies developed the Cassini-Huygens mission, a spacecraft orbiter that arrived in Saturn’s orbit in July 2004 after a seven-year voyage. The four-year mission will include 70 orbits around the ringed planet with an array of instruments to study the planet, its rings and its 30 known moons.

The Huygen’s probe detached from Cassini on Christmas Eve, Dec. 24th, 2004. The probe has since been falling to Titan and entered the atmosphere shortly after midnight, local time on Friday morning (09:06 GMT) January 14, 2005. Three sets of parachutes were to slow the probe and to provide a stable platform for scientific measurements. Instruments on board will collect information about the atmosphere’s chemical composition and the clouds surrounding Titan during its 2-2.5 hour descent. The data will be radioed to the Cassini orbiter, which will then relay the data to Earth.

Near-infrared images were taken from the W. M. Keck Observatory with the near infrared camera, NIRC2, and the adaptive optics system at the time of probe entry. The team had planned imaging sequences to look for thermal emissions or condensates at the probe entry site.