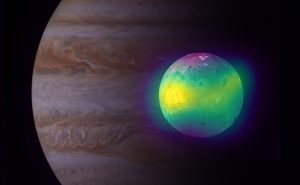 Maunakea, Hawaii – Astronomers have made a breakthrough in understanding how volcanic activity directly affects the atmosphere of Jupiter’s moon Io.

In a remarkable first, new radio images from the Atacama Large Millimeter/submillimeter Array (ALMA) in Chile show plumes of sulfur dioxide (SO2) and sulfur monoxide (SO) gas spewing from Io’s volcanoes and into its atmosphere. Based on the observations, a team led by University of California, Berkeley, has calculated that active volcanoes directly produce 30% to 50% of Io’s atmosphere.

The study is published in the November 6, 2020 issue of The Planetary Science Journal.

Until now, the main source of SO2 in Io’s atmosphere was unclear.

“It was not known which process drove the dynamics in Io’s atmosphere,” said lead author Imke de Pater, a professor of the graduate school in the Departments of Astronomy and of Earth and Planetary Science at UC Berkeley. “Is it volcanic activity, or gas that sublimates (or evaporates) from the icy surface when Io is in sunlight? What we show is that, actually, volcanoes do have a large impact on the atmosphere.”

Surprisingly, the team also detected SO gas scattered across Io’s atmosphere, not just above active volcanoes. Observations from W. M. Keck Observatory on Maunakea in Hawaii suggest the widespread SO is coming from unseen volcanoes, called stealth volcanoes, which erupt under such extreme heat, material is ejected as vapors. Such plumes of pure gas are difficult to see whereas plumes from Io’s known volcanoes like Pele spew more observable material such as dust and volcanic gas that condensates.

“When we looked at the largest areas of SO emissions with Keck, we found this gas originated most likely from volcanic vents at temperatures exceeding 1500 kelvin (2240 fahrenheit) but could not be traced to any known volcanoes,” said de Pater. “This hints at stealth volcanism. Most of the SO we saw with ALMA is most likely produced when sunlight breaks the sulfur-oxygen bond in SO2.”

Io is the most volcanically active moon in our solar system, with more than 400 known volcanoes filling its landscape. Studying the volcanic activity that feeds sulfur gases into Io’s atmosphere gives astronomers a deeper understanding of its exotic interior of fire and ice.