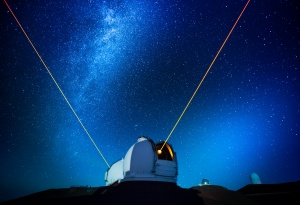 Maunakea, Hawaii – Nearly two decades after pioneering the technology on large telescopes, W. M. Keck Observatory is once again pushing the boundaries in the field of adaptive optics (AO) after receiving a powerful boost of support.

The National Science Foundation (NSF) has awarded the Observatory funding through their Mid-Scale Innovations Program to build a next-generation AO system on the Keck I telescope. Called Keck All-Sky Precision Adaptive Optics (KAPA), this futuristic technology will deliver significantly sharper images of the universe over nearly 100 percent of the night sky.

“This is an exciting leap forward in our quest to overcome the blurring effects of the Earth’s atmosphere,” said Principal Investigator Peter Wizinowich, chief of technical development at Keck Observatory. “Having worked toward this project for over a decade, I am pleased to see this funding come to fruition, thanks to the NSF and also to our community’s commitment to maintaining Keck Observatory’s leadership in the cutting-edge science enabled by adaptive optics.”

KAPA is designed to investigate some of modern astronomy’s greatest mysteries, including the following KAPA key science projects:

In keeping with Keck Observatory’s guiding principle of sharing important new knowledge, all scientific data will be publicly released to ensure the U.S. community is provided with a valuable scientific legacy.

“This revolutionary system will significantly expand Keck Observatory’s scientific reach,” said Co-Principal Investigator Andrea Ghez, director of the UCLA Galactic Center Group. “KAPA will also serve as an intellectual springboard for the coming generation of extremely large telescopes. We are developing KAPA in partnership with the Thirty Meter Telescope, Giant Magellan Telescope, and European Extremely Large Telescope (ELT) so they can be well-prepared when the time comes to build their own AO instrumentation.”

Next-generation technology like KAPA will require next-generation expertise. As such, the KAPA team is also placing a priority on the broader impact goals of education and workforce development.

Young scientists and engineers will be recruited to help develop KAPA and the KAPA science programs. The project will engage:

All students and young researchers will receive mentoring and hands-on work experience. The KAPA team will also launch a new summer school focused on astronomy technology and instrumentation for about 25 undergraduate and graduate students every summer over the course of the five-year project.

“We need more people trained in instrumentation, in particular women and other groups underrepresented in the field,” said Lisa Hunter, director of the Institute for Scientist & Engineer Educators at UC Santa Cruz and a member of the KAPA team. “This project will launch an innovative new effort to build a more diverse instrumentation workforce.”

“We are excited by this opportunity to keep Keck Observatory at the forefront of high angular resolution science and to continue to advance the state-of-the-art in adaptive optics,” said Hilton Lewis, director of Keck Observatory. “Sharing our knowledge with the next generation of scientists and engineers is very important to us, for it is they who will continue the vital work of utilizing and continuing to develop the most scientifically-productive AO system in the world.”

AO is a technique used to correct the distortion of astronomical images caused by the turbulence in the Earth’s atmosphere. This is done using lasers to create an artificial star anywhere in the sky, fast sensors to measure the atmospheric blurring, and a deformable mirror to correct for it – all done about 1000 times per second. The goal is to study the finest detail possible by largely removing the blurring effect of the atmosphere. It allows ground-based telescopes to match and even exceed the performance of space-based telescopes at much more modest costs.

To further improve the clarity of these images, the KAPA project will upgrade the current system by replacing key components: the Keck I laser, the computer that calculates the real-time corrections, and the camera that measures the atmospheric turbulence. The laser beam will be divided into three laser guide stars to fully sample the atmosphere above the telescope using a technique called laser tomography.

The project also includes upgrades to a near-infrared tip-tilt sensor to improve sky coverage and a technique called point spread function reconstruction that will optimize the value of the science data obtained with the accompanying science instrument (an integral field spectrograph and imager called OSIRIS).

The KAPA project launched in September and is expected to be completed in 2023.

W. M. Keck Observatory is a distinguished leader in the field of adaptive optics (AO), a breakthrough technology that removes the distortions caused by the turbulence in the Earth’s atmosphere.  Keck Observatory pioneered the astronomical use of both natural guide star (NGS) and laser guide star adaptive optics (LGS AO) on large telescopes and current systems now deliver images three to four times sharper than the Hubble Space Telescope. Keck AO has imaged the four massive planets orbiting the star HR8799, measured the mass of the giant black hole at the center of our Milky Way Galaxy, discovered new supernovae in distant galaxies, and identified the specific stars that were their progenitors. Support for this technology was generously provided by the Bob and Renee Parsons Foundation, Change Happens Foundation, Gordon and Betty Moore Foundation, Heising-Simons Foundation, Mt. Cuba Astronomical Foundation, NASA, NSF, and W. M. Keck Foundation.

The W. M. Keck Observatory telescopes are the most scientifically productive on Earth. The two 10-meter optical/infrared telescopes atop Maunakea on the Island of Hawaii feature a suite of advanced instruments including imagers, multi-object spectrographs, high-resolution spectrographs, integral-field spectrometers, and world-leading laser guide star adaptive optics systems. Keck Observatory is a private 501(c) 3 non-profit organization operated as a scientific partnership among the California Institute of Technology, the University of California, and the National Aeronautics and Space Administration. The Observatory was made possible by the generous financial support of the W. M. Keck Foundation. We wish to recognize and acknowledge the very significant cultural role and reverence that the summit of Maunakea has always had within the Native Hawaiian community.  We are most fortunate to have the opportunity to conduct observations from this mountain.

The National Science Foundation (NSF) is an independent federal agency that supports fundamental research and education across all fields of science and engineering. In fiscal year (FY) 2018, its budget is $7.8 billion. NSF funds reach all 50 states through grants to nearly 2,000 colleges, universities and other institutions. Each year, NSF receives more than 50,000 competitive proposals for funding and makes about 12,000 new funding awards.