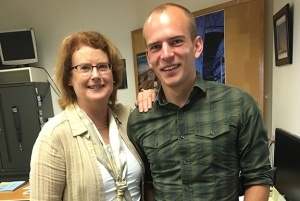 The Keck Visiting Scholars Program aims to inspire and develop the next generation of scientists and instrumentalists by providing hands-on experience in observational astronomy, hardware, and software involving active instrument operations and real-time problem solving. In our Keck Visiting Scholars Program, funds are provided for early career scientists (graduate students and postdoctoral students) to reside at W. M. Keck Observatory, working with our resident astronomers and instrumentalists for periods of one to three months.

Today’s early career astronomers often have less experience than previous generations with the telescope, the scientific instruments, nighttime observing, or the data reduction via which their scientific data is obtained. Because queue mode observing is commonly used on many ground-based telescopes, and space-based telescopes come with fully developed data pipelines, visiting observers assume Keck Observatory resident astronomers will conduct all the observing for them, a situation that would have been unheard of 10 years ago.

In turn, the Keck Visiting Scholars Program brings to our workplace the unique talents of graduate students and postdocs in astronomy performing their own observations on site at Keck Observatory, working directly with our resident astronomers, while also helping visiting scientists perform their astronomical research. Each visiting scholar is afforded the uncommon opportunity to accelerate their scientific career by working with some of astronomy’s most highly regarded researchers at the world’s premier Observatory.

Keck Observatory will host six to eight graduate students / postdoctoral scholars per year. If you are interested in supporting the Keck Visiting Scholar Program, please contact Ed Harris at eharris@keck.hawaii.edu, or Joan Campbell at jcampbell@keck.hawaii.edu or (808) 885-7887