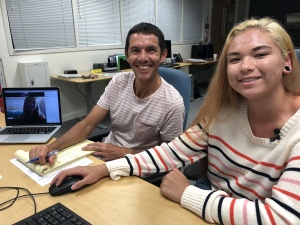 Keck Observatory Support Astronomer Carlos Alvarez guided her through her observing run, while Canada-France-Hawaii-Telescope Outreach Coordinator Mary Beth Laychak, who spearheads the Maunakea Scholars program, watched remotely from Europe — intent on not missing Steele in action despite being out of town on a business trip.

Steele gathered spectra of the Draco Dwarf galaxy during her observing run. This galaxy may potentially hold large amounts of dark matter — a mysterious material that makes up 27 percent of the mass of the universe. Very little is known about this bizarre element of the cosmos, which cannot be observed directly because it does not emit light or energy. 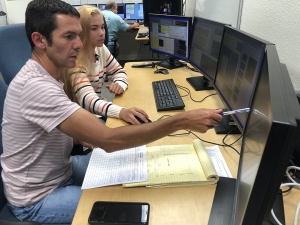 Now that Steele has the data, she will begin analyzing the spectra. The Maunakea Scholars program will pair her with an expert astronomer who can assist her in interpreting the results.

Steele was awarded the Keck Observatory observing run in April during her senior year at Honokaa High School.

She is the first student to win two observing runs in Maunakea Scholars program’s history, and the first high school graduate to observe at Keck Observatory since the facility’s twin telescopes began science operations 25 years ago.

The W. M. Keck Observatory telescopes are among the most scientifically productive on Earth. The two, 10-meter optical/infrared telescopes on the summit of Maunakea feature a suite of advanced instruments including imagers, multi-object spectrographs, high-resolution spectrographs, integral-field spectrometers and leading laser guide star adaptive optics systems.
Keck Observatory is a private 501(c)3 nonprofit organization operated as a scientific partnership among the California Institute of Technology, the University of California and the National Aeronautics and Space Administration. The Observatory was made possible by the generous financial support of the W. M. Keck Foundation.
We wish to recognize and acknowledge the very significant cultural role and reverence that the summit of Maunakea has always had within the Native Hawaiian community.  We are most fortunate to have the opportunity to conduct observations from this mountain.