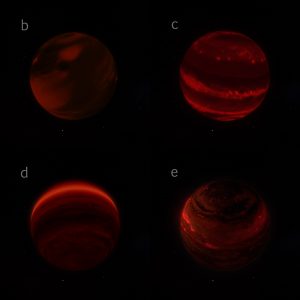 Maunakea, Hawaiʻi – Astronomers have captured the first-ever spin measurements of HR 8799, the famed system that made history as the very first exoplanetary system to have its image taken.

Discovered in 2008 by two Maunakea Observatories in Hawaiʻi – W. M. Keck Observatory and the international Gemini Observatory, a Program of NSF’s NOIRLab  – the HR 8799 star system is located 129 light-years away and has four planets more massive than Jupiter, or super-Jupiters: HR 8799 planets b, c, d, and e. None of their rotation periods had ever been measured, until now.

The breakthrough was made possible by a Caltech and Keck Observatory-led science and engineering team that has developed an instrument capable of observing known imaged exoplanets at spectral resolutions that are detailed enough to allow astronomers to decipher how fast the planets are spinning.

Using the state-of-the-art Keck Planet Imager and Characterizer (KPIC) on the Keck II telescope atop Hawaiʻi Island’s Maunakea, astronomers found that the minimum rotation speeds of HR 8799 planets d and e clocked in at 10.1 km/s and 15 km/s, respectively. This translates to a length of day that could be as short as three hours or could be up to 24 hours such as on Earth depending on the axial tilts of the HR 8799 planets, which are currently undetermined. For context, one day on Jupiter lasts nearly 10 hours; its rotation speed is about 12.7 km/s.

As for the other two planets, the team was able to constrain the spin of HR 8799 c to an upper limit of less than 14 km/s; planet b’s rotation measurement was inconclusive.

The findings are KPIC’s first science results, which have been accepted for publication in The Astronomical Journal; the study is available in pre-print format on arXiv.org.

Visualization of the spinning HR 8799 planets as viewed in the infrared. Bright patches correspond to holes in the clouds where we can see into the hotter depths of their atmospheres. Each planet is labeled in the upper left. Because the orientations of their spin axes are unknown, this is just one plausible way for how they would look like from Earth. Credit: W. M. Keck Observatory/Adam Makarenko

“With KPIC, we were able to obtain the highest spectral resolution observations ever conducted of the HR 8799 exoplanets,” says Jason Wang, an astronomer at Caltech and lead author of the study. “This allows us to study them with finer granularity than ever before and unlocks the key to gaining a deeper understanding of not just how these four planets formed, but how gas giants in general develop throughout the universe.”

How fast a planet spins gives insight into its formation history. Created out of gas and dust kicked up by a newborn star, baby planets start spinning faster as they accumulate more material and grow – a process called core accretion. It is believed that planetary magnetic fields then slow and cap their rotation speed. After the fully-formed planet is finished accreting and cools off, it spins back up.

“The spins of HR 8799 planets d and e are consistent with the theory that the planets’ magnetic fields put a brake on their spins in their natal years,” says Wang. “The spin measurements also hint at the notion that lower mass planets spin faster because they are less affected by magnetic braking, which might tell us something important about how they form. I find this tantalizing.”

Wang stresses this possible trend is unconfirmed; to validate it requires more KPIC spin measurements of lower mass companions. The team’s goal is to find a common link between the rotation periods of the HR 8799 planets, the giant planets in our own solar system, Jupiter and Saturn, and other known super-Jupiters and brown dwarfs.

“With enough spin measurements, we’ll be able to identify trends that would reveal how the physical processes driving planet formation work,” says co-author Jean-Baptiste Ruffio, a David and Ellen Lee Postdoctoral Scholar Research Associate in Astronomy at Caltech. “This is something that people have already started doing, but KPIC is allowing us to do this for the smallest, faintest, and closest imaged alien worlds.”

Commissioned between 2018 to 2020, KPIC’s specialty is detecting exoplanets and brown dwarfs that orbit so close to their host stars that the glare from the starlight makes it difficult to ʻsee’ these celestial bodies from Earth. The instrument filters unwanted starlight by way of an innovative fiber injection unit that routes light from the Keck II telescope adaptive optics (AO) system into the Observatory’s Near-Infrared Spectrograph (NIRSPEC).

KPIC’s first light results are outlined in a technical paper that has been accepted in the Journal of Astronomical Telescopes, Instruments, and Systems (JATIS) and is available in pre-print format on arXiv.org.

“KPIC is a game-changer in the field of exoplanet characterization,” says KPIC Principal Investigator Dimitri Mawet, Professor of Astronomy at Caltech. “It allows us to measure a planet’s length of day, orbit, and molecular makeup of its atmosphere.”

KPIC made strong detections of water and carbon monoxide, but no methane, in three of the four HR 8799 planets – c, d, and e – which is consistent with what is known of the planets’ atmospheres.

Discovered in 2008, HR 8799 is the very first multiple-planet system beyond our solar system to have its picture taken. This timelapse animation of HR 8799, which includes 7 direct images captured by W. M. Keck Observatory over a period of 7 years, shows the orbital motion of the four planets in this system. Credit: J. Wang, Caltech/C. Marois, NRC-HIA

“It’s exciting to see KPIC’s superpower manifest,” says Keck Observatory AO Scientist/Engineer Jacques Delorme, lead author of the JATIS paper. “Because this is the first technology of its kind, we didn’t know if KPIC was going to work as well as it did. Now that we have successfully demonstrated its capabilities, we can move on to Phase 2 of the project to further improve the instrument’s overall performance.”

“We have yet to unlock KPIC’s full science potential,” says Caltech Lead Instrument Scientist Nemanja Jovanovic, co-author of the technical paper. “Through more instrument upgrades, we hope to observe exoplanets in the near future with such a high degree of detail, that we’ll be able to study weather phenomena and map clouds of gas giant planets.”

Phase 2 of the KPIC upgrades are planned for this Winter. If all goes well, Keck Observatory’s science community may begin using the technology in the second half of 2022.

Support for KPIC is generously provided by the Heising-Simons Foundation, Simons Foundation, Caltech, and NASA Jet Propulsion Laboratory. This project is conducted in collaboration with W. M. Keck Observatory, UC Santa Cruz, UCLA, and the University of Hawaiʻi Institute for Astronomy.

W. M. Keck Observatory is a distinguished leader in the field of adaptive optics (AO), a breakthrough technology that removes the distortions caused by the turbulence in the Earth’s atmosphere. Keck Observatory pioneered the astronomical use of both natural guide star (NGS) and laser guide star adaptive optics (LGS AO) and current systems now deliver images three to four times sharper than the Hubble Space Telescope at near-infrared wavelengths. AO has imaged the four massive planets orbiting the star HR 8799, measured the mass of the giant black hole at the center of our Milky Way Galaxy, discovered new supernovae in distant galaxies, and identified the specific stars that were their progenitors. Support for this technology was generously provided by the Bob and Renee Parsons Foundation, Change Happens Foundation, Gordon and Betty Moore Foundation, Mt. Cuba Astronomical Foundation, NASA, NSF, and W. M. Keck Foundation.