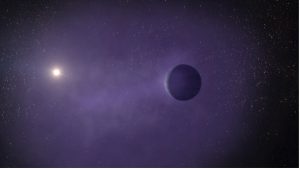 illustration of the mini-neptune toi 560.01, located 103 light-years away in the hydra constellation. the planet, which orbits its star at distance of 0.06 au, is losing its puffy atmosphere and may ultimately transform into a super-earth.
Credit: W. M. Keck Observatory/Adam Makarenko

Maunakea, Hawaiʻi – Astronomers have identified two different cases of “mini-Neptune” planets that are losing their puffy atmospheres and likely transforming into super-Earths. Radiation from the planets’ stars is stripping away their atmospheres, driving hot gas to escape like steam from a pot of boiling water.

“Most astronomers suspected that young, small mini-Neptunes must have evaporating atmospheres,” says Michael Zhang, lead author of both studies and a graduate student at Caltech. “But nobody had ever caught one in the process of doing so until now.”

The findings are published in two separate papers in The Astronomical Journal: one is based on data from W. M. Keck Observatory on Maunakea, Hawaiʻi and the other paper involves observations from NASA’s Hubble Space Telescope. Together, the studies help paint a picture of how exotic worlds like these form and evolve.

Mini-Neptunes are a class of exoplanets, which are planets that orbit stars outside our solar system. These worlds, which are smaller, denser versions of the planet Neptune, consist of large rocky cores surrounded by thick blankets of gas.

An artistic animation of the mini-Neptune TOI 560.01, located 103 light-years away in the Hydra constellation. Astronomers have discovered that the mostly rocky planet is losing its puffed-up atmosphere and that the gas is unexpectedly flowing toward the star. The planet orbits its star at a distance of 0.06 astronomical unit, or AU (an astronomical unit is the distance between Earth and our Sun), and it is tidally locked, meaning that one side always faces the star. The atmosphere is escaping due to radiation from the star, which is stripping the gases away. The scientists say that this process could transform planets like TOI 560.01 into a new class of planets called super-Earths after a few hundred million years. Credit: W. M. Keck Observatory/Adam Makarenko

Furthermore, Keck Observatory data surprisingly showed the gas around TOI 560.01 was escaping predominantly toward the star.

“This was unexpected, as most models predict that the gas should flow away from the star,” says Professor of Planetary Science Heather Knutson, Zhang’s advisor and a co-author of the study. “We still have a lot to learn about how these outflows work in practice.”

One possible explanation for this gap is that mini-Neptunes are transforming into super-Earths. The mini-Neptunes are theorized to be cocooned by primordial atmospheres made of hydrogen and helium. The hydrogen and helium are left over from the formation of the central star, which is born out of clouds of gas. If a mini-Neptune is small enough and close enough to its star, stellar X-rays and ultraviolet radiation can strip away its primordial atmosphere over a period of hundreds of millions of years, scientists theorize. This would then leave behind a rocky super-Earth with a substantially smaller radius, which could, in theory, still retain a relatively thin atmosphere similar to that surrounding our own planet.

“A planet in the gap would have enough atmosphere to puff up its radius, making it intercept more stellar radiation and thereby enabling fast mass loss,” says Zhang. “But the atmosphere is thin enough that it gets lost quickly. This is why a planet wouldn’t stay in the gap for long.”

Other scenarios could explain the gap, according to the astronomers. For instance, the smaller rocky planets might have never gathered gas envelopes in the first place, and mini-Neptunes could be water worlds and not enveloped in hydrogen gas. This latest discovery of two mini-Neptunes with escaping atmospheres represents the first direct evidence to support the theory that mini-Neptunes are indeed turning into super-Earths.

Signatures in the Sunlight

The astronomers were able to detect the escaping atmospheres by watching the mini-Neptunes cross in front of, or transit, their host stars. The planets cannot be seen directly but when they pass in front of their stars as seen from our point of view on Earth, telescopes can look for absorption of starlight by atoms in the planets’ atmospheres. In the case of the mini-Neptune TOI 560.01, the researchers found signatures of helium. For the star system HD 63433, the team found signatures of hydrogen in the outermost planet they studied, called HD 63433 c, but not the inner planet, HD 63433 b.

“The inner planet may have already lost its atmosphere,” Zhang explains.

As for the strange discovery that the gas lost from TOI 560.01 was flowing toward – instead of away from – its host star, future observations of other mini-Neptunes should reveal if TOI 560.01 is an anomaly or whether an inward-moving atmospheric outflow is more common.

“As exoplanet scientists, we’ve learned to expect the unexpected,” says Knutson. “These exotic worlds are constantly surprising us with new physics that goes beyond what we observe in our solar system.”

The Near-Infrared Spectrograph (NIRSPEC) is a unique, cross-dispersed echelle spectrograph that captures spectra of objects over a large range of infrared wavelengths at high spectral resolution. Built at the UCLA Infrared Laboratory by a team led by Prof. Ian McLean, the instrument is used for radial velocity studies of cool stars, abundance measurements of stars and their environs, planetary science, and many other scientific programs. A second mode provides low spectral resolution but high sensitivity and is popular for studies of distant galaxies and very cool low-mass stars. NIRSPEC can also be used with Keck II’s adaptive optics (AO)system to combine the powers of the high spatial resolution of AO with the high spectral resolution of NIRSPEC. Support for this project was provided by the Heising-Simons Foundation.