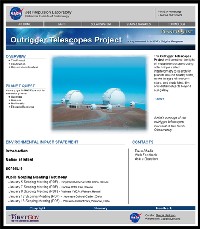 SUMMARY: Pursuant to the National Environmental Policy Act of 1969, as amended (NEPA) (42 U.S.C. 4321 et seq.), the Council on Environmental Quality Regulations for Implementing the Procedural Provisions of NEPA (40 CFR Parts 1500-1508), and NASA policy and procedures (14 CFR Part 1216 Subpart 1216.3), NASA has prepared and issued a Draft EIS for the proposed Outrigger Telescopes Project. NASA proposes to fund the Outrigger Telescopes Project at the W.M. Keck Observatory within the Mauna Kea Science Reserve on the summit of Mauna Kea, Island of Hawai‘i. The Draft EIS addresses alternative sites and the environmental impacts that could potentially occur with on-site construction, installation, and operation of four, and possibly up to six, Outrigger Telescopes. The proposed Outrigger Telescopes would be strategically placed around the existing Keck I and Keck II Telescopes, within the current footprint of W.M. Keck Observatory. A reasonable alternative site has been identified on La Palma, Canary Islands, Spain.

DATES: Written comments on the Draft EIS must be received by NASA no later than September 30, 2004, or 45 days from the date of publication in the Federal Register of the U.S. Environmental Protection Agency notice of availability of the Draft EIS for the Outrigger Telescopes Project, whichever is later.

ADDRESSES: Written comments should be addressed to Dr. Carl B. Pilcher; Office of Space Science, Code SZ; NASA Headquarters; 300 E Street, SW; Washington, DC 20546-0001. Although hardcopy comments are preferred, comments may be sent by electronic mail to Dr. Carl B. Pilcher at otpeis@nasa.gov or by facsimile at 202-358-3096.

Limited hard copies of the Draft EIS are available by contacting Dr. Carl B. Pilcher at the address or telephone number indicated below.

SUPPLEMENTARY INFORMATION: The Outrigger Telescopes Project is a key element in NASA’s Origins Program. The Origins Program addresses two fundamental questions: (1) How do galaxies, stars, and planets form? (i.e., “Where do we come from?”); and (2) Are there planets, aside from ours, that have the conditions necessary to support life? (i.e., “Are we alone?”).

The Outrigger Telescopes Project has four scientific objectives that contribute to achieving the goals of the Origins Program:
1. Detect the astrometric signature (i.e., the wobble of a star due to the gravitational influence of an unseen planetary companion) of planets as small as Uranus.
2. Make images of proto-stellar disks (i.e., disks of dust and gas in space believed to be an early stage of star formation) and stellar debris disks (i.e., clouds of gas or other material remaining after the star is formed).
3. Provide high-resolution information about some faint objects outside our galaxy.
4. Make high-resolution observations of objects within the solar system, including asteroids, comets, and outer planets.

NASA proposes to fund the Outrigger Telescopes Project at the W.M. Keck Observatory site located within the Astronomy Precinct in the Mauna Kea Science Reserve on the summit of Mauna Kea, Island of Hawai‘i. The W.M. Keck Observatory is the site of the two largest optical telescopes in the world – the twin 10-m (33-ft) Keck I and Keck II. The Outrigger Telescopes Project, if fully implemented as proposed, would consist of up to six 1.8-m (6-ft) telescopes placed strategically around the two existing Keck Telescopes.

The California Association for Research in Astronomy, a non-profit corporation established by the University of California and California Institute of Technology, operates and maintains the W.M. Keck Observatory. The W.M. Keck Observatory site (approximately 2-hectare (ha)(5-acre (ac))) is located within the Astronomy Precinct and is subleased to the California Institute of Technology by the University of Hawai‘i. The Astronomy Precinct encompasses approximately 212 ha (525 ac) of the Mauna Kea Science Reserve (4,568 ha (11,288 ac)). The Mauna Kea Science Reserve is leased to the University of Hawai‘i by the State of Hawaii.

In addition to the W.M. Keck Observatory site, alternative sites with at least one existing 8-m (26-ft) or larger telescope are considered in the Draft EIS. The Gran Telescopio Canarias site at the Roque de los Muchachos Observatory on La Palma, one of the Canary Islands, Spain meets the criteria to be considered as a reasonable alternative site.

If NASA cannot or decides not to implement the Outrigger Telescopes Project at the W.M. Keck Observatory site or at the reasonable alternative site in the Canary Islands, NASA would consider sites where at least the one objective that does not require a large telescope (i.e., detect the astrometric signature of planets as small as Uranus) can be achieved. Such reduced science sites considered in the Draft EIS include the Mount Wilson Observatory in Los Angeles County, California and the Mount Palomar Observatory in northern San Diego County, California. The Draft EIS also addresses the No Action alternative.

The Draft EIS analyzes the potential environmental impacts associated with the on-site construction, installation, and operation of the Outrigger Telescopes at the W.M. Keck Observatory site and at the reasonable alternative site. The potential environmental impacts at the reduced science sites are also evaluated. Environmental issues emphasized include, but are not necessarily limited to, cultural resources, flora and fauna, sewage and hydrology, hazardous materials, and cumulative impacts.

NASA welcomes and requests public comments and concerns regarding the Proposed Action, alternatives, and associated environmental issues. NASA is holding public meetings to provide an opportunity for the people of Hawai‘i to comment in person on the Draft EIS. Public meetings will be held at the following locations:

All meetings will begin with an informal Open House from 5:45 to 6:15 pm. The formal meeting to receive public comments will begin at 6:15 pm. NASA plans to videotape and have a Hawaiian language translator at each meeting. To help ensure that oral comments are correctly captured, if possible, speakers should provide NASA with a written supporting statement. NASA will also consider conducting public meetings near alternative sites on the United States mainland, including the Mount Wilson and Palomar Mountain sites, if there is sufficient public environmental interest and concern.

Persons, organizations, or other parties who wish to receive a written copy of NASA’s Record of Decision issued pursuant to this NEPA process should so indicate to Dr. Carl B. Pilcher at the addresses provided above.

Written public input and comments on alternatives and environmental issues and concerns associated with the Outrigger Telescopes Project are hereby requested. Written comments will be reproduced to the extent practical and specifically responded to in the Final EIS. Oral presentations at the public comment meetings that are unsupported by written statements will be summarized by NASA and addressed in the Final EIS.