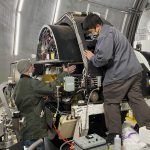 Maunakea, Hawaii – W. M. Keck Observatory’s science community is celebrating the successful revitalization of the Low Resolution Imaging Spectrometer, or LRIS – one of the Observatory’s acclaimed instruments used in Nobel Prize-winning research. The instrument team tasked with the LRIS rescue mission has completed a 2-night engineering run; within hours of the first night […] 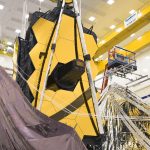 Maunakea, Hawaii – University of Hawaiʻi Institute for Astronomy (IfA) astronomers will play an instrumental role in helping unveil the universe’s very first galaxies, more than 13 billion light years away. This week, NASA announced the first suite of science programs for its groundbreaking James Webb Space Telescope (JWST), set to launch in October 2021. The IfA researchers are part of the “COSMOS-Webb” project, which […] 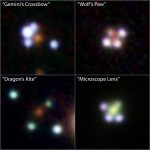 Machine-learning Methods Lead to Discovery of Rare “Quadruply Imaged Quasars” That Can Help Solve Cosmological Puzzles Maunakea, Hawaiʻi – With the help of machine-learning techniques, a team of astronomers has discovered a dozen quasars that have been warped by a naturally occurring cosmic “lens” and split into four similar images. Quasars are extremely luminous cores […] 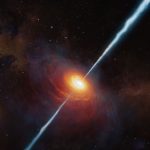 The Most Distant Radio Beacon in the Early Universe

Astronomers Discover the Most Distant Radio-loud Quasar Currently Known Maunakea, Hawaii – An international team of astronomers has pinpointed the most distant radio-bright quasar known so far. Using various telescopes around the world, including W. M. Keck Observatory on Maunakea in Hawaii, the research team led by the Max Planck Institute for Astronomy and the […] 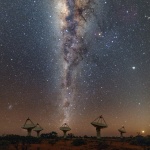 W. M. Keck Observatory Astronomers Among the Authors Awarded the 2020 AAAS Newcomb Cleveland Prize Maunakea, Hawaii – A historic feat in successfully zeroing in on the precise location of a non-repeating fast radio burst has earned the highest recognition from the American Association for the Advancement of Science (AAAS). The international team that made […] 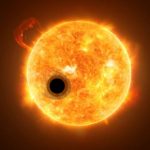 An Université de Montréal-led team of astronomers discovers that the core mass of exoplanet WASP-107b is much lower than previously thought possible for a gas-giant planet. Maunakea, Hawaii – The core mass of the giant exoplanet WASP-107b is much lower than what was thought necessary to build up the immense gas envelope surrounding giant planets like […] 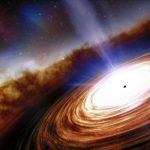 The Earliest Supermassive Black Hole and Quasar in the Universe

Maunakea Observatories Provide Key Observations The most distant quasar known has been discovered. The quasar, seen just 670 million years after the Big Bang, is 1000 times more luminous than the Milky Way, and is powered by the earliest known supermassive black hole, which weighs in at more than 1.6 billion times the mass of […] 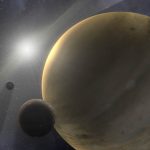 Gas Giant Takes 218 Days to Complete its Orbit Maunakea, Hawaii – Scientists aren’t usually able to measure the size of gigantic planets, like Jupiter or Saturn, which are far from the stars they orbit. But a UC Riverside-led team has done it. The planet is roughly five times heavier than Jupiter, hence its nickname […] 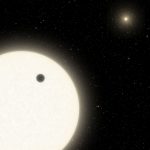 A Tale of Planetary Resurrection

Years after its detection, astronomers have learned that a planet called KOI-5Ab orbits in a triple-star system with a skewed configuration. Maunakea, Hawaii – Shortly after NASA’s Kepler mission began operations back in 2009, it identified what was thought to be a planet about the size of Neptune. Called KOI-5Ab, the planet, which was the second […] 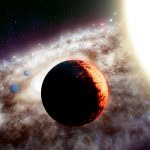 A Rocky Planet Around One of Our Galaxy’s Oldest Stars

University of Hawaiʻi Astronomers Using W. M. Keck Observatory Discover Ancient Magma World Orbiting a Chemically Unusual Star Maunakea, Hawaiʻi – “They should have sent a poet,” says Ellie Arroway in the film Contact as, suspended in outer space, she gazes upon a spiral galaxy. Almost all of the planets discovered to date (including the […]