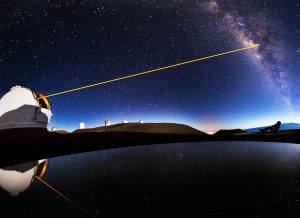 The research identifies the most scientifically-impactful technologies ATI has supported the past three decades; among those listed are instruments at several Maunakea Observatories: W. M. Keck Observatory, Canada-France-Hawaiʻi Telescope, Subaru Telescope, and the University of Hawaiʻi (UH) 2.2-meter Telescope.

The study is published in today’s issue (September 21, 2020) of the Journal of Astronomical Telescopes, Instruments, and Systems.

“New technology is a science multiplier,” says lead author Peter Kurczynski, who served as a Program Director at NSF and is now the Chief Scientist of Cosmic Origins at NASA Goddard Space Flight Center. “It enables new ways of observing the universe that were never before possible.”

At Keck Observatory, the ATI program has provided vital support for the development of next-generation adaptive optics (AO) systems on the twin 10-meter telescopes.

“NSF ATI has been instrumental in advancing Keck’s AO through grants for new technologies, including an integral field spectrograph detector upgrade, infrared tip-tilt sensor, point spread function reconstruction, and an infrared pyramid wavefront sensor,” said Peter Wizinowich, chief of technical development at Keck Observatory. “The latter project, completed in 2019 and in operational use, has already led to multiple exciting new exoplanet science results, including direct images of two giant newborn PDS 70 planets, with many more discoveries in the works.”

Other NSF ATI awards for the development of groundbreaking technologies at Maunakea Observatories include support for AO technology at the Canada-France-Hawaiʻi Telescope and Subaru Telescope, as well as a HAWAII 4RG mosaic camera, high-tech shape-shifting secondary mirror, and Robo-AO, all on the UH 2.2-meter telescope.

Keck Observatory is a private 501(c) 3 non-profit organization operated as a scientific partnership among the California Institute of Technology, the University of California, and the National Aeronautics and Space Administration. The Observatory was made possible by the generous financial support of the W. M. Keck Foundation.

The National Science Foundation (NSF) is an independent federal agency created by Congress in 1950 “to promote the progress of science; to advance the national health, prosperity, and welfare; to secure the national defense…” NSF is vital because it supports basic research and people to create knowledge that transforms the future. This type of support: Is a primary driver of the U.S. economy, enhances the nation’s security, advances knowledge to sustain global leadership. With an annual budget of $8.3 billion (FY 2020), NSF is the funding source for approximately 25 percent of all federally supported basic research conducted by America’s colleges and universities. In many fields such as mathematics, computer science and the social sciences, NSF is the major source of federal backing.

ABOUT THE ADVANCED TECHNOLOGIES AND INSTRUMENTATION PROGRAM

The Advanced Technologies and Instrumentation (ATI) program provides individual investigator and collaborative research grants for development of new technologies and instrumentation for astronomy and astrophysics. The program supports overarching science objectives of the Division of Astronomical Sciences. Development of innovative, potentially transformative technologies are encouraged, even at high technical risk. Supported categories include but are not limited to:  advanced technology development or concept feasibility studies and specialized instrumentation to enable new observations that are difficult or impossible to obtain with existing means.  Proposals may include hardware and/or software development and/or analysis to enable new types of astronomical observations. The program encourages making products of research available to the public. It also encourages community coordination of technology and instrumentation development efforts via an annual Principal Investigators meeting.