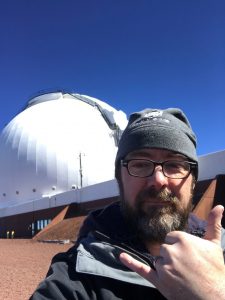 John is the primary scientific liaison for the observatory, and is responsible for maintaining the relationship between the observatory and its scientific  stakeholders including the observing community and federal funding agencies.  John helps set the science policy for the observatory, and is responsible for identifying new partnership and funding opportunities.  He is a member of multiple national astronomical oversight and advisory committees, and is the current chair of the Astronomy and Astrophysics Advisory Committee.  John is an experienced observational research astrophysicist using ground and space-based facilities in the UVOIR.  He has a strong interest in and experience with federal science policy and strategic planning.  John is a member of multiple large national and international research teams, and multiple science definition teams for future telescope facilities. John has been a Keck observer for over two decades.