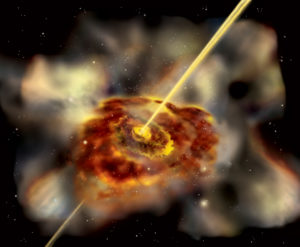 aurore simonnet, sonoma state university/nasa epo
An artist's representation of scattered energy near a black hole. Astronomers used a polaroid filter to see only the visible light coming from a black hole. As a result, they detected a new signal called a "Balmer Edge" feature that will allow the team to model temperatures and mass densities in the region near black holes. This technique of using polarized light has been used before to study the surface of the Sun, but never to see visible light from black holes

MAUNA KEA, Hawaii (November 11th, 2004) An international team led by an Edinburgh astronomer have discovered that by studying polarised light from black holes they can focus much more closely on what exactly is going on around them. The work is published this week in the monthly notices of the Royal Astronomical Society on November 11th.

However, Kishimoto at the University of Edinburgh and the international team of Antonucci at UC Santa Barbara, Boisson at Paris Observatory, and Blaes also at UC Santa Barbara, have used the Keck I telescope in Hawaii and European Southern Observatory’s Very Large Telescope in Chile, to do this isolation of the light. They have looked at a small part of the light emitted from black holes – light that has been scattered as it passes through the clouds very nearby. This scattered light can cleverly be picked up by looking through a polaroid filter just like the lens of polaroid sunglasses, which essentially blocks the unwanted light from elsewhere in the galaxy. The scattered light is polarised so the light waves all line up in the same direction and can pass through the Polaroid filter, but light from the surrounding area which is not polarised is excluded by the filter.

Dr Kishimoto, who leads the team, explained the importance of the new method: “For the first time we can use visible light to focus on the part of a galaxy that is very close to the black hole. We are interested in an area only about one light-day across. Until now, without using Polaroid filters, we couldn’t separate the visible light from the black hole from the light coming from a much larger region about 100 light-days across.” To put this in context, the galaxies surrounding the black holes are about 30,000 light years across.

As a result of this closer look the team have found a new signal in the observed light that can provide information about the material around a black hole. The signal, called a ‘Balmer edge’ feature, reveals properties of the material and will allow the team to carry out more detailed modelling of the temperature and density of the region near black holes than has been possible before now. This feature is commonly used to diagnose the nature of the surface of the Sun and other stars, but has never before been seen in visible light from black holes.

Note for editors: One light-day is the distance light travels in one day i.e. 1/365 of a light-year.