SCIENTIST FROM UH HELPS NASA GET PHOTOS OF ‘WILD 2’ 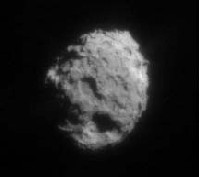 nasa
NASA's Stardust spacecraft captured this image of comet Wild 2's nucleus as it flew past on Jan. 2, 2004. It is one of the clearest images of a comet nucleus ever taken.

MAUNA KEA, Hawaii (April 6th, 2004) A University of Hawaii astronomer’s observations with the Keck telescope on Mauna Kea enabled the NASA spacecraft Stardust to get closer to comet Wild 2 than it planned in a Jan. 2 flyby.

As a result, images of the comet are among the best ever recorded, astronomers said.

The Stardust was able to take images of the comet with its camera and do navigation, but the pictures could provide only two of three dimensions, said Dave Tholen of the Hawaii Institute for Astronomy.

“One thing they didn’t have a very good handle on was the third dimension—basically the direction in which the spacecraft was traveling—so they could accurately determine how far the spacecraft would go from the planet,” he said.

They needed images from a ground-based telescope to help calculate when they were going to pass the comet at the closest approach, he said.

On Dec. 18, 19 and 20, at NASA’s request, Tholen used the Keck telescope to get images of the comet, which was behind the sun.

“There was a very narrow window of two weeks before the Jan. 2 encounter when the comet was visible very, very low in the sky during the morning twilight,” he said.

He said he pointed the Keck telescope 5 degrees above the horizon and, with the weather cooperating, took about 50 observations over three nights.

“They were absolutely crucial for helping the navigation team say exactly when the encounter was going to occur.”

As a result, he said, the science team decided to take a more aggressive imaging sequence, every 10 seconds.

The Keck images also showed the comet was less active than predicted so the team decided to try for a closer approach, he said.

The targeted approach of 186 miles was changed to 155 miles, and the spacecraft got within 145 miles of the comet’s nucleus, he said.

Don Brownlee of the University of Washington, principal investigator for the mission, said on a Jet Propulsion Laboratory Web site that the spacecraft obtained the highest-resolution images ever taken of a comet’s nucleus.

Wild 2 is the most active planetary surface in the Earth’s solar system other than the sun, Brownlee said, “jetting dust and gas streams into space and leaving a trail millions of kilometers long.”